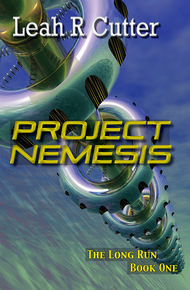 Her choices stink: prison down on a planet, or serving the Cartel as another peon in their soul-crushing machine.

Her savior? An alien trying to break the stranglehold the Cartel has over all trade.

Her job? Command an experimental spaceship containing more secrets than anyone will ever imagine, let alone believe. Enough to get them all killed if the truth ever comes out.

Project Nemesis—the first book in the new space opera series The Long Run—takes you on a wild ride with aliens, corporate espionage, and, oh yeah. Snark.

Here's a fantastic new book from an outstanding author who will always keep you coming back for more. Leah writes with unique points of view grounded in her love of exotic cultures and her travels around the world. She brings to life complex and relatable characters in the richest, most dazzling settings you can imagine. Having the first book in her new space opera series debut as part of this bundle is a stroke of good fortune for which we can all be thankful. – Robert Jeschonek

Judit Kovács, Human captain and proud owner of the new-to-her spaceship Ferdinand II, turned the corner of the hallway leading from her cabin to the front of the ship and banged her shoulder against the damned corner.

"A fenébe!" she cursed in Hungarian as she hurried forward.

"Graceful as always?" Saxon, her second-in-command, asked from his seat as she came walking into the main helm, still rubbing her shoulder.

Judit thought about gracing him with a few choice Hungarian curses. However, just because they'd be in Hungarian didn't mean that Saxon wouldn't know or understand them. He'd heard enough of them while working with her over the past eight years.

Besides, then he might reply with some of his own, from his native Yu'udir, and then they'd be stuck cursing at each other for an hour or more, coming up with even more new and inventive phrases. Not that that happened frequently. Usually, it only occurred when they were drunk. Or something like that.

Saxon may have sounded like a British university professor when he spoke Common, but he was covered in short white fur and stood over two meters tall. The skin of his face was pitch-black, with searing blue eyes that peered out intelligently. His hands had black palms and claws that he kept well-trimmed. That day, he wore a double-breasted, brown tweed vest, but no cap.

Instead of replying, Judit slid into the captain's chair and pointedly asked, "How close are we to the station?"

They'd just passed out of the hyperspace gate and into the Kembag system. While no one monitored the gates leaving the hyperspace tunnels, the gates entering hyperspace were all controlled by The Universal Trading Cartel.

Judit pushed her butt back further into the chair, trying to get the gel to activate and actually start cushioning her, damn it. She'd tried to reprogram the chair to respond to her weight and height, but it stubbornly held onto the previous owner's preferences, which appeared to be ramrod straight and hard as rocks.

Judit glanced out the front windows of the spaceship. However, she couldn't make out the station in the distance. She ran her finger over a dial on the arm of her chair, bringing up a screen. It hovered above the console in front of the windows, a 2-D hologram, giving her a better view of what lay ahead.

The Kembag system was primarily settled by the Bantel. The uncharitable would call them a chameleon, based on their similarity to the lizard that originally came from Earth. Just as they might call Saxon a Yeti. They were both bi-pedal, with symmetrical limbs. You didn't get into different until you started looking at the Khavvassa, or the Ogliochuno.

Space stations seemed to come in two designs: one or more discs rotating around a central core, or weirdly organic and distinctly asymmetrical, with the oldest parts of the station in the center and the newer pieces randomly attached later.

Thankfully, the Mawar station appeared to be the former and not the latter. Judit sometimes enjoyed those older stations, getting lost while exploring them. However, today was not the day for that sort of frivolity.

She had a schedule, and a pretty narrow window for delivering her cargo. If she made it early—she checked the countdown clock, and she was not—she'd get a bonus.

As it was, given a three hour short run from the system gate into the station, she should be smack dab in the middle of her delivery window. No bonus, but no penalties either.

That is, if she didn't get shunted to some back lane when approaching the station.

She really didn't have the budget to pay a penalty. Not when Ferdinand II still needed so many upgrades. She glanced around the main helm, noting what she'd like to change.

The main helm was cramped, at least as far at Judit was concerned. Though it had been built for Humans, and she'd spent her entire life in ships or on stations, the particular helm made her claustrophobic at times. Maybe it was the way the ceiling sloped, making Judit always feel as though she stood in the center of a bubble, unable to straighten up around the edges. Or perhaps it was the awful color scheme—seriously, who painted all the walls in shades of orange, covered the floor in black rubber, and put red lights in every display? (It was part of what she hated so much about the captain's chair. That dirty, brown-orange was not her color.)

Or maybe it was because the windows at the front of the helm were tiny compared to the rest of the space, sixty centimeters wide and only thirty tall. It wasn't as if there were a military ship and needed to put up blast shields to protect themselves. No, the former owners had just flown everywhere looking at screens and never at what they were actually flying toward. They relied on the ship's programming, instead of their own instincts.

She understood the logic. Smaller windows made a ship seem "serious." Large windows were for cruise liners and tourists.

After she'd repainted and changed out all the display lights, she'd blow off the top of this ship. Install windows that took up the whole front end. She didn't care if it made the front of the ship look square and unsymmetrical. There was no reason for any spaceship to be streamlined, at least as far as she understood the physics and moving through space.

But that "someday" was pretty far off in the future. For now, she needed to deal with her current job.

She flipped a switch on the arm of her chair, opening up a channel to the second helm, where Brett, a Bantel, worked the communications for the ship. Another Human, Xidong, monitored the sensors from there, making sure debris didn't show up out of nowhere and smack into them.

"Brett, make sure you contact the station as soon as we get in range," Judit said.

Judit couldn't help but shudder. How could a person always be so happy? But it was a general characteristic of all of the Bantel.

That, plus the fact that they could change their skin color to whatever they chose, including blending into whatever background they happened to be standing in front of if they stood completely still.

It was one of the reasons why the Bantel wore clothing that frequently had either patterns or colors that clashed. Or both. It was their way of getting you to trust them. They couldn't disappear in such outfits.

Judit still wouldn't trust one of the Bantel as far as she could throw one. And she could heave a member of the smaller race quite far. Though Judit had a few pounds on her—on the squishy side as one of her ex's had referred to her—underneath those she was mostly muscle. Good peasant stock as her mother had joked. She wasn't as wide as a Khanvassa—a beetle like being who grew their own armor—but she wasn't thin and svelte like a damned worm either. She was in her mid-forties and deserved a few extra curves. And pounds.

"Anything out there we should avoid, Xidong?" Judit inquired, just to include him in the conversation.

After a few long second, Xidong finally replied. "Nothing for us to worry about."

She flipped the switch to close the channel with defiant gesture. "Bah," she said.

This was the initial voyage of Ferdinand II, at least for Judit and this crew. She'd left her home space station of Záhony decades before. She'd started with one of the local traders, Mikel, who'd treated her like a long-lost granddaughter. She'd worked with him for years, scraping by and saving every credit she could. When he'd retired over eight years before, she inherited his cargo ship Levente.

Eventually, she'd managed to save enough to buy a newer ship, Ferdinand II. Saxon had been the only one who'd come with her from the old crew. Everyone else had retired when the ship had.

Judit couldn't afford a top of the line ship. Ferdinand II had stretched her finances out as far as she could go and still not be in (too much) debt.

Of course, if she'd join The Universal Trading Cartel and stop insisting on being an independent cargo carrier, she could have gotten a much bigger and nicer ship, one that fit her like a glove.

However, then she'd be stuck in the Cartel for the rest of her life, making the same run over and over again until she keeled over. Just another cog in one great big stupid machine.

The reason Judit couldn't wait to leave Záhony was because it was a tiny space station. Everyone knew everyone else. Everyone was always in everyone else's business. It was like growing up in the small Hungarian village of the same name back on Earth, with less than four thousand people.

No, Judit had wanted to see the universe, to travel to the exotic worlds she saw on the vids, to make friends with all the various species, including the elusive Chonchu. She wanted to have adventures everywhere she went.

Mostly, she'd succeeded, when she wasn't busting her ass over cargo, still scraping and scrimping to get by.

Some members of the original crew of Ferdinand II had stayed with the ship. After this initial shake-down run, she'd come to a decision about whom she would keep, like Sorrel who handled her cargo. He was an Oligochuno, and looked like a giant earthworm. He had a natural ability to rotate objects in three dimensions in his head to get everything to fit perfectly. And maybe she'd keep Xingdo, though she'd have to have a talk about him actually doing his damned job and not playing those elaborate video games of his between scans.

But Brett was probably going to have to go. She'd been competent enough, but too damned cherry. Plus, she had a way of questioning everything that Judit asked her to do, being slyly subversive.

However, Judit didn't have to worry about any of that today.

Today, she was completing her first run. Going to get it into the station on time. Then go and celebrate while contemplating where she was going to find a new crew.

Or as her mother had always jokingly said, Egyszerre egy kecske: one goat at a time.