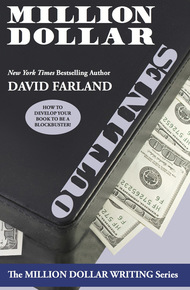 In this book, Dave teaches how to analyze an audience and outline a novel so that it can appeal to a wide readership, giving it the potential to become a bestseller. The secrets found in his unconventional approach will help you understand why so many of his authors go on to prominence.

Would you build a giant castle without drawing up a blueprint first? Would you write an epic novel without making a plan? Bestseller David Farland has taught many workshops for hundreds of eager writers, many of whom have gone on to become chart-busting bestsellers. He knows what he’s talking about. Even if you are a “seat of the pants” writer, you’ll get some great insights in how to put your novel together. – Kevin J. Anderson

What Kind of Writer Are You?

Let's face it: there are a lot of places where you can learn to outline a story. I've read books on the topic, studied card systems used in Hollywood, and even computer programs that can all teach you how to outline well.

In fact, I bought a program recently for $70 that did a pretty decent job of teaching you how to create a good working outline—but only if you wanted to write a "hero journey" story. It wasn't much help in writing romances or comedies or several other types of tales.

So this book can help you to outline any story, but more importantly it also seeks to explain to you why some story ideas are better than others. Why do some ideas electrify wide audiences while others leave readers scratching their collective heads? How can you tell the difference so that you don't waste your time writing a book or screenplay that has an audience of just one?

To understand this, I need to get into the basic psychology of storytelling, taking you much deeper than your average "how to" manual or software does.

This requires that you first learn what constitutes a potential bestseller, recognize the qualities of a good story, and then learn how to outline it in such a way as to bring out the best in it.

So, long before we ever talk about outlining, we're going to spend dozens of pages on audience analysis and story theory.

You may be wondering if this book is for you. I'll be honest: maybe it isn't. Read the next page to find out why.

There are two major approaches for writing a story: discovery writing and outlining. Neither approach is completely right nor wrong, and most authors take a hybrid approach. So let's discuss each approach, along with its strengths and pitfalls.

A discovery writer is one who likes to begin a story without really knowing where it will end. Stephen King is an excellent example of a discovery writer. Such writers enjoy the process of "discovering" the story as it unfolds. Often, a writer who is deeply involved in a novel will be writing about a character and suddenly recognize that unexpected things are happening: the killer in a mystery turns out to be the protagonist himself, or the hero actually fails in his quest.

Discovery writing is an excellent way to create stories that feel organic. Characters often tend to come out well-rounded in discovery stories, and settings come to life.

However, I've known countless discovery writers who have problems with weak middles and sluggish endings because they didn't control where the story was going; or maybe the writer may take ages to write a novel because they end up following characters down blind alleys.

Very often, in discovery novels the focus on the primary character's shifts from one protagonist to another over the course of the novel, or the major conflicts that the author started with aren't the ones that get resolved. When this happens, the reader feels cheated because the author hasn't kept the promises that were set up at the beginning of the tale.

Yet many authors find that extra enjoyment in taking this approach because the story always feels fresh, vital, and alive. It makes the crafting of the tale fun, in and of itself, so that regardless of whether the piece sells, the work is enjoyable. So if you love the process of crafting the tale, this might be your favorite mode of writing.

Just remember that not all projects can be written through the discovery method. I've created a number of novels for major franchises like Star Wars and The Mummy. Some of them have earned hundreds of thousands of dollars. But franchise owners will insist on a beautiful outline before they greenlight a project.

If you are solidly in the camp of discovery writers, if you never want to learn to work in others' franchises, then this book may be of no help to you at all. In working with writers, I find that about ten percent of them fit into this category. You probably know who you are: you may be the kind of writer who likes to write what are called "small" stories, intimate tales based upon your own past, your own personal life. Or like Stephen King, maybe you just enjoy the process of discovery so much that it becomes your primary drive for writing. It becomes addictive.

If this describes you, don't waste your time and money on this book.

Outlining writers enjoy creating a story by considering how to develop an engrossing tale, told at a great pace, with jaw-dropping plot twists. For them, plot is often paramount. There are plenty of plotting writers on the bestseller lists—people like Kevin J. Anderson or Ken Follett. For outliners, the fun of writing often comes in the pre-writing phase, where they sit and think, "Wouldn't it be cool if…?"

The strengths of outlining are that numerous. It is often both easier and faster to draft a book or screenplay based upon an outline because you know exactly where the story is going. There are fewer pitfalls and temptations to rewrite, since you're not following characters down blind alleys. Writing from an outline makes the author more productive.

Sometimes, big stories can be sold on the basis of an outline alone, so that the writer can get paid for doing his work well in advance. A "proven" writer can make deals for millions of dollars based upon an exciting outline.

The weakness of outlining is that for some authors the process of writing that first draft can begin to feel mechanical—as if it is too much like a regular day job. As a critic, I find that stories written from outlines can feel a bit "thin," as if the characters and scenes exist only to forward the plot. So as a writer, you need to guard against that.

One other weakness of outlining is that once the outline is complete, the author may feel that the story has already been invented, and he no longer needs to write it. One writer in Hollywood was known for creating great plots, which he would tell his friends in bars or at dinner parties. But after he had perfected his tale through three or four tellings, he no longer felt the need to write it all—and thus would ignore it forever. He'd lost the excitement. His friends were always amazed at the number of great movies he created—none of which ever made it to a first draft.

But there are ways to combine the advantages of both approaches to writing.…

Many authors will take a hybrid approach to writing, using some outlining methods but leaving themselves open to free-write.

For example, you might find that you can outline just the world for your story. Whether you set your tale in a fantasy world, or in twelfth century Germany, or in a far-future dystopia, the world is not likely to change. Yet your characters and societies and their resulting conflicts will all grow out of that world. So you can develop a wonderfully detailed milieu, with wars and major conflicts and maps and notes on various subcultures and political rivalries and religions—and even have a strong idea of where your story is going—yet you may choose to "discover" who your characters are. Or maybe as you sit and think about how to best describe that world, you'll create elaborate set pieces of description, bringing your world to a life more deeply than you anticipated, making new discoveries about it.

In short, you may outline much of the tale, but leave some parts to discover. Tolkien seemed to work this way, creating Middle Earth and some of his characters long before he wrote Lord of the Rings.

I personally will often outline a novel in thirds—so that I know where I'm going with opening scenes, but then stop partway through to consider how to handle the next stage of a tale. I know from long experience that by the time that I reach the middle of my novel, I will have changed emphasis and direction often enough so that I will need to "discover" what happens next. I almost never give my "themes" any thought before I begin, and so I often discover the theme of my tales, and the controlling metaphors as a I write. All of which means that I don't quite know how it will all end—not really.

In any case, any one of these approaches—discovery writing, outlining, or a hybrid approach—can work beautifully for a professional writer.

You as an author may need to discover through trial and error which technique you enjoy most.

So this book will teach you how to outline in an effort to increase your productivity and the value of your finished product, as well as to discover new revenue streams. More importantly, it strikes at how to recognize and develop those great ideas that form the core of a blockbuster intellectual property.