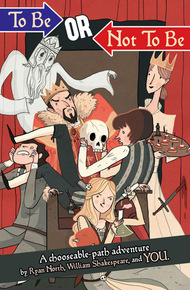 Ryan North is a pretty okay dude who lives in Toronto, where he creates Dinosaur Comics (you can read those for free at qwantz.com!) and writes the Eisner and Harvey award-winning Adventure Time comic series (these ones cost money!). He's also co-edited the #1 bestselling anthology series "Machine of Death" (you can read that at machineofdeath.net for free!) and has written a Young Avengers miniseries for Marvel (again, that'll cost you money.)

Ryan has kissed, by his count, at least four different women, and they all totally came back for more.

To Be or Not To Be by Ryan North

To Be or Not To Be is a choose-your-own-path version of Hamlet by New York Times best-selling author Ryan North. Play as Hamlet, Ophelia, or King Hamlet - if you want to die on the first page and play as a ghost. It's pretty awesome! Readers can follow Yorick skull markers to stick closely to Shakespeare's plot, or go off-script and explore alternative possibilities filled with puzzles and humor.

Each ending in the book is accompanied by a full-color, full-page illustration by one of the 65 most excellent artists working today, so each rereading yields new surprises and rewards. Ryan's prose is, as always, colloquial and familiar but full of clever references, vivid imagination, and only the most choice of jokes. Inventive devices like a book-within-a-book (to mirror Hamlet's play-within-a-play) take full advantage of the gamebook medium and liven up the original story for even the most disinterested of Shakespeare readers!

This book is so funny and works so well, you’ll wonder why Shakespeare didn’t originally write his plays as choose your own adventures. – The Devastator

You have just been born! Congratulations, good work on that thing! Now SURPRISE, babies are boring, so we're going to jump ahead in time to a point where you're an adult and you've already lived a bunch of your life, but I promise most of what we're skipping over was really dull. You ate a lot and slept a lot and made some friends, tears were shed, makeouts were totally had, etc. It was a bunch of high school stuff: the awesome stuff starts now!

So! Let's begin, my friend!

Um...remind me again who you are?

OPHELIA? She's an awesome lady in her late 20s, with a calm, competent, and resourceful demeanour. She's got a +1 bonus to science, but she's also got a -1 weakness against water, so heads up!

HAMLET? He's an emo teen in his early 30s. Also, he's the prince of Denmark. Hamlet has a +1 resistance to magic, but there's no magic in this adventure, so this never gets mentioned again as of right...NOW.

HAMLET SR.? He's the King of Denmark, 50 years old. He's super good at fighting and leading men into battle and naps. Let's say...+1 to each? Look, bottom line: he's an unstoppable machine of death, and should you choose to be him, you MAY experience kingly glory.

You are King Hamlet. All of Denmark is under your command! Everything's going so great for you!

At present, you are in Norway, where just this afternoon you led Denmark's forces to an astounding victory during which you PERSONALLY killed the Norwegian king. Stabbed him right through the head, you did. His eye popped out and rolled on the ground and then you stepped on it. Whoah! Your ass is bad! You are a badass!!

You decide after a day of being good at fighting, you should have a nap. You've earned it! You settle down in an orchard for some nappy times. During your delightful rest, your brother pours some poison in your ear and you die.

Hah hah, wow! You've barely made one choice so far and you're dead already. Way to go, champ!! You're really good at books, huh? It's just a stellar job you're doing reading here, Chuckles.

Okay, FINE, I feel sorry for you. Here's a choice that you can choose.

Do not become a ghost

Good news! The afterlife exists, and it's full of ghosts! You know this because you're now one of them. You get to spend all your time slamming doors, rattling chains, and telling on the person who killed you!

But here's the thing: I, the author, told you, the reader, that your brother poured poison in your ear while you napped. But you, as Hamlet Sr., have no idea how you died! You slept through the whole thing. So you need to figure out who killed you if you're going to revenge yourself on your murderer, assuming you even WERE murdered. Because remember that for all you know, you could've died of a heart attack!

This should be fun!

Accept that you died of a heart attack

You hang around Norway for a bit, trying to listen in on what people are saying, but they're all speaking Norwegian! You only speak Danish, so understanding Norwegian is a little difficult. It all sounds like Swedish to you!

You nod your head, agreeing that all of this is both accurate and extremely interesting.

While these three languages are GENERALLY supposed to be mutually intelligible, you find you can understand Norwegian speakers only if you're concentrating (which you are) and if they're speaking slowly and clearly (which they're not, as everyone is running around upset about war and all these kings getting killed). Ironically, Norwegian speakers can understand Danish easier than Danish speakers understand Norwegian, but that doesn't help you much! That would only be useful if you were playing as the Norwegian king whose ghost has stowed away on YOUR army's boat headed back to Denmark, but I haven't given you that option even though it would be extremely awesome. If you're wondering what happens to this Vengeful Ghost King, I can tell you only this: THE ANSWER EXISTS IN YOUR IMAGINATION??

But here's the good news, it turns out WRITTEN Danish and WRITTEN Norwegian are actually pretty similar! So you spend the next several nights haunting people, quietly reading their diaries while they sleep peacefully in their beds. And you don't know this, but ghosts do this all the time. Ghosts just love sneaking a peek at the secrets of the living!

It takes a while, but you finally find the diary of someone who wrote on the day you died that she was wandering by a garden, minding her own business, when she saw some Danish guy pour something in some other Danish guy's ear!

Wake up this person and ask her about it

You grab a piece of paper and write down the words "HEY I'M NOT HERE TO KILL YOU, I JUST WANT TO KNOW ABOUT THAT MURDER YOU MAYBE WITNESSED?" but in Danish of course, hah hah. You gently shake the woman awake while holding the piece of paper up in front of her.

She's freaked out initially (she was just woken up by a g-g-g-g-ghostly apparition from beyond the grave) but once she reads your note, she looks at you suspiciously and says, "For real?"

You flip over the paper and write "YEAH I'M THE GUY THAT GOT KILLED MAYBE, AND I GUESS I WANT TO REVENGE MY DEATH OR WHATEVER? BUT PLEASE SPEAK SLOWLY AS NORWEGIAN IS NOT MY NATIVE LANGUAGE; I'M FROM DENMARK."

She tells you what she saw and gives you a physical description of the guy. Unfortunately, the man answering to her description could only be one person: your brother, Claudius!!

Congratulations, my king! You now know what you know so that whole Second Person Pronoun-Paradoxical Auto-Dramatic Irony thing has been slain! You have been awarded 500 experience points, plus you've unlocked a new quest: Revenge Yourself on Claudius.

You're feeling pretty chuffed about this whole situation!

Okay! Let's revenge your death! Your murderer is getting away with it in Denmark.

*Swim back to Denmark

Wait for the next boat back to Denmark

==SWIM BACK TO DENMARK==

It's, like, 200 kilometres between the two nations. You know that, right?

So you start to swim back to Denmark, but it's a lot of work to keep your body corporeal so that you can swim, so eventually you get tired and stop. For a while you float above the water, but that gets boring, so for most of the journey you float down to the ocean floor and travel along it.

Hey, there's a sunken pirate ship here. Hey, there might be treasure in it!

Ignore it, just arrive in Denmark