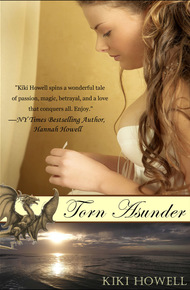 Aubrey Griffen is a witch whose true reasons for coming to London soon fall to the wayside when she catches the eye of Edmund Bryant, the Marquess of Dalysbury. He seduces her into a whirlwind romance until the lies and threats of his mother force her to flee to Triaill Brimuir, a secret island of her ancestors off the coast of Ireland. Edmund goes after her only to be hit by Aubrey's confusion and anger when she magically transforms him into an elemental beast of her own creation.

However, it is when Edmund's lust mysteriously turns him back into a man that the couple are forced to deal with a family secret and untold of powers. Now, Edmund must learn to shift himself into the beast in order to save her in a battle of black verses white magic.

Fraught with scenes of explicit intimacy, romantic spells and mystical shapeshifting, Torn Asunder is a unique blending of the age of manners with sexual magic.

Fraught with scenes of explicit intimacy, romantic spells and mystical shapeshifting,Torn Asunderis a unique blending of the age of manners with sexual magic. – Kiki Howell

The roses, elegant in their refinement, fell from one another with little grace as she undid the paper around them. Staggering back a few steps until her back met the wall, she slid down to the floor letting the wrapping and flowers fall where they may.

Aubrey wrapped her arms tightly around her midsection. Her chest ached more with each beat of her heart as she swallowed hard, blinked away the mistiness over her eyes, and remembered.

It had been the beginning of the season, a bit over a fortnight ago, when she first encountered Edmund Bryant, the Marquess of Dalysbury. Although she rolled her eyes still at the title, she felt compelled to live through it all again—through the days of fantasy in which she had allowed herself to participate. Love at first sight didn't always give way to rational thinking. The feelings did, however, make possible the wavering delusions of believing impossible dreams could come true.

At the time, she had just come to London to live with her cousins, Lord and Lady Sanderly. They had paid for her travels under the guise of giving a poor relation of marriageable age a chance to find a good husband. The truth of the matter was, she had shown a great aptitude for learning the magical powers inherited through their line. The good Lord and Lady, while holding the public titles of Earl and Countess, were descendants of one of the notorious Pendle witches. They were to teach her to harness and utilize her innate talents in secret while flaunting her about from various parties and balls in the public eye.

She recalled with a weak smile the first ball Lord and Lady Sanderly had thrown to immerse her into proper society. Gripping her hands before her waist to resist fidgeting, she had tried hard to fix to memory all of the titles of those to whom she was being introduced. Her level of discomfort had increased. An unsettled awareness of someone in the room, an almost haunting premonition, had made her heart race and her mouth dry. She had paid no mind to the successive shivers which rushed the length of her spine until they pooled as heat in her tightening stomach.

Reminded she was holding her breath only when she was forced to speak, she found her ribs had begun to ache. When a chill more pervasive than any she had ever known, even in the drafty county cottage she had been raised in, permeated her shoulders, she had turned in the direction of the source. Her eyes met with a man standing just across the room looking back at her. She immediately felt challenged to not look away from the gaze of his dark eyes. They radiated a raw energy unlike anything she had ever encountered before, even among those with her own esoteric abilities.

A connection was made. Her heart beat at a frantic, uneven pace like a horse racing over shoddy roads. At the same time, a vague forewarning had made her break out in a glistening of sweat. She fought the urge to escape the room as well the need to move toward the man. She had given merit to her reactions based only on the fact she had captured the glance of an aristocratic gentleman. He had a lady on his arm, one of obvious higher circumstances in a lavish satin gown.

Engrossed in the man's fine manners, she watched as he removed himself from his current audience. His tempestuous form in posh attire spun on the heel of his expensive footwear to find her again with his haunted and hungry eyes. He seemed an odd mix of rugged and refined. She had felt the thrill and danger of being pursued by a beast which lurked inside of the man.

As if he was just happening by, he had paused before her and spoken greetings to Lady Sanderly. If his perfection could have been improved upon, he had managed it. Charm sang from his mouth. The spicy smell of him embraced her.