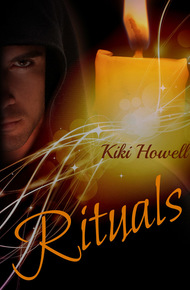 After a Wiccan ritual opens her eyes to her old friend, Maddie's first week together with Ryan, goes by in a blur of knots and ropes.

Together, they find the freedom they seek in bondage. But, when Maddie's controlling ex-husband returns hell-bent on taking her back, will Ryan and Maddie be bound by the past or become tied to each other?

When a Wiccan ritual opens her eyes to an old friend, Maddie's first week with Ryan is a blur of knots and ropes until Maddie's controlling ex-husband returns hell-bent on taking her back. – Kiki Howell

"Are you quite agreeable to beginning, Maddie?" Ryan asked in the formal pedagogy of days gone by. She knew he had done so for her benefit with his coy smile and the come-hither voice he adopted when he wanted to lighten the mood. While she was grateful for his attempts, he had not succeeded in easing her nerves. As she looked to the silver cord hanging in loops over his outstretched hand, she did her best to smile reassuringly back at him to return the favor. Behind the facade, her thoughts flowed like turbulent seas as she tried to maneuver through the waves of her doubts.

Still, she was more than ready. A restless sort of eager, she earnestly desired the proposed outcome of this new experience. It was as if she had been preparing herself for this moment for the last few years. To prove it, she nodded her head at him and dropped the white silk cape he had given her.

As he looked down over her revealed figure, she disregarded the fact that this was the first time he had seen her naked. She had chosen to participate in tonight's rite, thought it out and drafted herself to take the final step she needed to freedom. Ignoring the way her body trembled within his field of vision, she averted her gaze to the breathtaking yards of material embroidered with delicate flowers lying in a shimmering puddle at her feet. It reflected the candles all around them making her feel for a moment she was a goddess on display at the altar.

"Kneel before me," he requested. Yet, within his sovereign voice, she detected a slight tremor. Maddie was obedient, lowering herself with as much grace as she was capable of. Upon kneeling, she had caught a glimpse of how his jeans curved over a quite impressive outline, and she couldn't get past the bulging part of his anatomy presently at her eye level. Although she was trying to focus in on his words, as she understood the vital importance of comprehending his directions, she was distracted even after he tugged closed his own robe to cover himself. Pondering for just a moment if her present state of undress had something to do with the extent of his forming erection, she reveled in the sweetness of the stroke to her ego. She had needed the boost. Looking up at Ryan as he spoke about relationships and transformation specifically in the vain of what would transpire tonight, hope filled her. She desired the creation of momentum and healing this rite promised.

Ryan was invoking the goddess of purification. As his hand gestures repeatedly moved his robe revealing to her in flashes his semi-erect state, she grinned thinking the help of a goddess may not be all the man before her wanted. The inadvertent compliment warmed her body from within to match the warmth of the midsummer night clinging to her flesh. Ryan and Maddie, in all of the hours they had spent together, had never spoken of such things between them, like attraction or love outside the bounds of their unique friendship. She had known him since she was in fourth grade, when her family moved out to the hills beyond her small southern Ohio town into a house right across the dirt road from his. They had gone from creating so-called "chemical cabins" underneath the deck of his pool with his mother's old cosmetics to meeting in secret once they had begun dating other people in high school. The two of them had maintained their friendship, which no one else would have understood, until Maddie married right out of high school and went away to college with her new husband. Kneeling down in front of her, Ryan interrupted her reminiscent escapade of memories.

"Relax." He spoke his latest instruction hushed in the same sweet voice which had comforted her numerous times in the past year since they had reconnected. They had found each other thanks to the grand technology of Facebook, of all places. While going through her divorce, a friend had suggested the site so she could join groups of other women going through the same thing. Ryan had seen her name and picture on the site through the application that suggests possible friends. He had confessed to how happy he had been when he saw her profile come up on his computer screen with the words, You and Maddie both graduated from McKinley High School. Finding they were only fifty minutes from one another two states away from their original hometown had been an amazing break for them both. Now, he knelt before her helping her to make the final break she needed from the man who had controlled her life for the past nine years, her ex-husband, Kurt.

"Close your eyes, and trust in the coven completely. Trust in you and in me," he spoke again, interrupting her obsessively errant thoughts. "The night is quiet. You are safe here. You are not alone and you are not afraid. Search your mind, for Kurt, the man whom you wish to break all ties from, with whom you wish to cut the cords."

Maddie felt Ryan's hands brush her waist, and the cord he held then loop around her. The softness of the cord resting on her bare skin was juxtaposed to the fleeting warm roughness of his hands. Despite the residual ill-favored feelings the image of her ex-husband created, her nipples hardened with Ryan's touch and an ache developed between her thighs. She wondered if it had been a mistake to do this ritual skyclad. The point of the ceremony had been to free herself of any lasting energy ties with her ex. The reason for doing so free of clothing was to be free of all barriers to the work needing to be done. Only, that had been the idea of it, anyway. Presently, it seemed being naked was going to be a distraction, and she didn't need another of those. She needed this rite, because she was through with giving her life over to someone else's control.