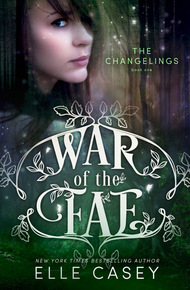 Elle Casey is a prolific, New York Times and USA Today Bestselling American writer who lives in southern France with her husband, three kids, and several furry friends. She writes in several genres and publishes an average of one full-length novel per month.

War of the Fae Book 1: The Changelings by Elle Casey

Jayne Sparks, a potty-mouthed, rebellious seventeen-year-old and her best friend, shy and bookish Tony Green, have a pretty typical high school existence, until several seemingly unrelated incidents converge, causing a cascade of events that change their lives forever. Jayne and Tony, together with a group of runaway teens, are hijacked and sent into a forest, where nothing and no one are as they seem. Who will emerge triumphant? And what will they be when they do?

**No sex or drugs. Yes, contains some violence and foul language - some might say excessive foul language. Not meant for middle-grade readers (less than 15 years of age).**

I've known NYT bestseller Elle Casey for a few years now, and our books have had the pleasure of sharing fae-themed bundles, so including her in this StoryBundle was a no-brainer. Her War of the Fae series features a smart-mouthed, sassy teen who discovers that the world of the fae is all too real. In addition to her YA fae books, Elle is hard at work on multiple series in multiple genres, and is basically an unstoppable force of nature. – Anthea Sharp

"Okay, so we're here ... now what?" I hitched my backpack up over my shoulder, looking around the Miami train station. I was hoping Tony had a plan because I sure didn't.

Tony and I turned to look at the guy walking up to us. He seemed to be about our age, maybe a little bit older, definitely scruffier. I was immediately suspicious.

"No, we're not lost, but thanks," said Tony, brushing him off. He dropped his bag from his shoulder to the ground, fishing around in it for what turned out to be a map.

"Why do you need a map if you're not lost?" asked the guy, now standing over Tony's stooped form.

I seriously wasn't in the mood for this. "Dude, we've got a map, therefore, we're not lost. Do you mind?"

He held up his hands in mock surrender. "Yeah, hey, no problem. I was gonna offer you some help, but I guess you don't need it. See ya later." He strolled away, sitting down on a nearby bench and pulling out a cigarette.

"So where are we, Tony?" I asked in a low voice, keeping my eye on Mr. Helpful over on the bench, sure he was up to something.

Tony stood up next to me, showing me the map. "Well, we're here, at the station."

I left off monitoring Mr. Helpful to roll my eyes at Tony. "Whaddya mean, you don't know? Where're we going next?"

Tony shrugged his shoulders. "Wherever you want."

"Tony, this was your plan! Where are we going? I'm gonna have to call my mom and tell her, eventually."

"Well, to be honest, my plan was to get out of town. I didn't really think much beyond that; I figured you'd come up with something."

I put my fingers on the bridge of my nose, pinching it and squeezing my eyes shut, trying to stop the flood of swear words that were about to fly out of my mouth. "Tones, do you mean to tell me we came all the way down to Miami with fifty bucks between us and no plan at all?"

He looked at me through his impossibly horrible glasses, nodding soundlessly.

I glanced at Mr. Helpful who was smirking, blowing out obnoxious smoke rings.

"Sure you don't need my help?" he asked loudly, not even looking over at us.

I grabbed the map, frustrated, and went over to the bench, Tony on my heels. "Fine. You want to help? Tell us a good place to get some cheap dinner and maybe sleep too." I thrust the map towards him.

The weather was nice; I was thinking we could probably just find a nice spot on a beach somewhere and not worry about spending any money. It would be like camping in the Girl Scouts - not that I had ever done that or anything.

"You don't need a map, just follow me." He got up from the bench, rolling his cigarette between his two fingers until the ash fell off the end.

Tony and I looked at each other. Man, I wished I could speak telepathically with him because I really didn't want Mr. Helpful hearing what I wanted to say.

Tony didn't worry so much about that stuff, apparently. "I don't know, Jayne. We don't even know this guy."

"Oh yeah, sorry about that. Name's Jared ... Jared Bloodworth." Mr. Helpful held out his hand to Tony, putting the no-longer-lit cigarette butt in his front pocket with the other. "You've got nothing to worry about. I'll show you where I stay and you can decide if you want to stay there too or not; it's up to you. Sometimes there's food, too."

Tony took his offered hand, shaking it firmly. I continued to watch Mr. Helpful ... Jared ... trying to figure out if he had any ulterior motives hidden behind his dark brown eyes. I kinda suck at that though, so I gave up, shrugging my shoulders. Tony had his gun, and this guy didn't look too dangerous. He had kind of a freaky name, but that wasn't his fault. He was skinny and not much bigger than me, with brown hair swept around in a casual rocker kind of style. I was thinking I could take him if I had a little adrenaline rush going for me, which I probably would if he were trying to kill me. He looked like he could use a shower, but he didn't exactly appear homeless. His clothes were in decent shape. I still couldn't figure out the cigarette thing, though. Why did he put that disgusting filter in his pocket? I guess it was better than dropping it on the ground. Maybe he was a save-the-environment freak.

Jared strolled ahead of us, not seeming to care whether we followed or not. We walked a few blocks away from the train station, down some streets and alleys, into a commercial warehouse area. It was pretty rundown, some of the businesses having closed a long time ago. Our destination was in the back of a warren of single-story warehouses covered in graffiti.

Jared stopped in front of a beige metal door with a heavy-duty lock on it - the kind that has a thick metal plate over the latch area so no one can pick the lock or crowbar the door open. He banged on the door with his fist. "Open up, it's me, Jared."

Tony and I looked at each other. He put his hand in his bag, making me suddenly very nervous. The last thing I wanted to see was that gun coming out and Tony playing Rambo again.

We heard the lock click open. The door opened a crack while whoever was inside verified it was Jared standing there. The door opened a little bit more and then stopped. "Who the hell are they?" The female voice coming from within didn't sound very happy.

"Don't worry about it," said Jared, pushing on the door, opening it the rest of the way, the girl stepping back to make room. "After you," he said, gesturing to the gloomy dark interior.

Even though it was dark inside, the girl at the entrance was easy enough to see, illuminated by the light of the late afternoon Miami sun - bright and hot as hell. She was tall and skinny, a little dirty, hair almost scrappy-looking. None of this, though, could obscure her beautiful face.

Tony was awestruck. I elbowed him in the stomach so he would close his mouth, afraid he was going to drool on me. Tony's reticence about entering the dark warehouse disintegrated in the face of this Aphrodite standing in front of him. He stepped forward, entering the building and disappearing into the blackness within.

Jared stood looking at me expectantly. "What are you afraid of?"

Pfft. "Nothing," I said. False bravado is my friend. I stepped into the darkness behind Tony, hoping I wasn't about to become a teen runaway statistic.