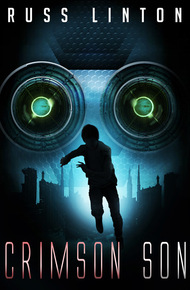 In the fourth grade, Russ Linton wrote down the vague goal of becoming a "writer and an artist" when he grew up. After a journey that led him from philosopher to graphic designer to stay at home parent and even a stint as an Investigative Specialist with the FBI, he finally got around to that "writing" part which he now pursues full time.

Russ creates character-driven speculative fiction. His stories drip with blood, magic, and radioactive bugs. He writes for adults who are young at heart and youngsters who are old souls.

His mother kidnapped, his superhero father absent, powerless Spencer Harrington faces a world of weaponized humans to prove himself and find the truth.

Nineteen-year-old Spencer is the son of the Crimson Mask, the world's most powerful Augment. Since witnessing his mother's abduction by a psychotic super villain two years ago, he's been confined to his father's arctic bunker. When the "Icehole" comes under attack from a rampaging robot, Spencer launches into his father's dangerous world of weaponized human beings known as Augments.

With no superpowers of his own save a multi-tool, a quick wit and a boatload of emotional trauma, Spencer seeks to uncover his mother's fate and confront his absentee superhero father. As he stumbles through a web of conspiracies and top secret facilities, he rallies a team of everyday people and cast-off Augments. But Spencer soon discovers that the Black Beetle isn't his only enemy, nor his worst.

This was such an interesting idea. Lots of people have tackled superhero fiction before, but taking the POV of an un-super child in a dysfunctional super-family had me hooked from the beginning. What's not to love when you first realize that the teen protagonist is being held prisoner—not by some archvillain, but by his own super-father, who has trapped him in the family fortress of solitude? Rather than focusing on the heroics, this starts out in a very relatable way, hooking us with the fraying family dynamic before anything super-powered even gets onto the stage. (Read the full IOD Report.) – Jefferson Smith

A fog of mortar dust hangs in the air. The swaying shadows are sharply outlined against light from the busted overhead lamp, its naked bulb swinging wildly. Outside air rushes in as the robotic arms gouge more chunks from the wall.

The aromatic scent of the flowers in the courtyard carries on the breeze. I recall their bright colors, the complete opposite of the frozen hell I came from; a place I will absolutely, positively never see again. Never.

With that thought, I'm juiced. Alive. The entire world is waiting. Waiting for me to prove I don't need to be locked up and praying for someone to come save me. If anyone needs to be saved right now, it's Emily. She needs my help, and carrying her out of here isn't going to work. You've gotta work with what you've got.

I'm going outside and the drone is coming with me.

Jumping to my feet, the distance to the apartment door closes fast. Glowing eyes in oversized sockets lock on to my movement.

"Why can't someone program you morons to use a door?" I shout, trying to keep its attention focused on me.

With a final swat, the drone clears a chunk of the wall big enough to fit through. Its head turns slowly as it scans the interior of the apartment and the eyes flare when they sweep past me. My sudden clarity of purpose wavers. But Emily, she's still lying motionless on the floor.

"That's right, I'm talking to you. Your backup better be a Roomba, bitch!" Sounding brave works better if you aren't desperately fumbling with a deadbolt.

The drone hovers through the opening, and boot rockets extinguish right as the faux-tile floor blackens and melts. It lands with a squishy thud and the cloud of pulverized mortar thickens. Head swiveling, it scans again. I'm looking over my shoulder as the deadbolt clicks. Bug-like eyes lock on once more and the drone starts to pound across the apartment. Past Emily. Straight for me.

Scrambling out the door into the stairwell, I get maybe half a dozen steps before the landing shimmies as the robot tears through the door frame in one long stride. two, three stairs at a time are left behind in frantic leaps. I nearly fall face first in the foyer.

An angry old woman with a hairnet and a Hawaiian muumuu glares out the doorway of the apartment below Emily's.

"Have some respect! You know what time it…" her voice dies as the entire building shakes.

Our fearful eyes connect and she disappears inside. I shout and ram the push bar of the courtyard door, stumbling into the cool night air. Cutting to the left, I leave the walkway and crush a trail through the flowerbed. There's an enormous crash as the foyer door hurtles into the courtyard. Sure, being a non-Augment right now sucks, but I've practically got a degree in running from lumbering bullies. Sharp turns are the best option, keeping obstacles between us to slow my pursuer down.

I head for a row of parked cars along the street. The sounds of rending metal and raining shards of plastic and glass fill the air as I duck between parked vehicles. A few cars zip by on the road, swerving madly as the drivers catch sight of the cyclone of metal behind me. Further away, cars screech to a halt, engines gunning desperately in reverse. If I stay out here much longer, someone else is going to get hurt.

A car flips end-over-end along the street as the drone searches the parking spaces. I dive under a nearby SUV, shimmying on knees and elbows to the other side and trying not to hook my backpack on the undercarriage. Heat blossoms out as the drone takes to the air.