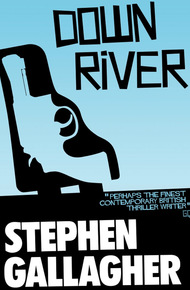 Stephen Gallagher is a novelist and screenwriter, and creator of TV's Eleventh Hour. Television adaptations of his novels Chimera and Oktober starred John Lynch and Stephen Tompkinson. His most recent novel is The Bedlam Detective.

Down River by Stephen Gallagher

Johnny Mays has the moral conscience of a selfish child in the frame of a plain-clothes cop. The city is his playground, the rest of us his toys. He likes to find out where we work, and where we live, and what will scare us most. And Johnny never had a toy he didn't break.

But Johnny starts a car chase, and he pushes it too far. Soon they're fishing for his body at the foot of a dam, and his partner Nick Frazier has been left behind. They were friends, once, a long time ago. Nick had hoped that he might save Johnny.

Johnny's last words still echo in Nick's mind: "I'm going to remember this," he said, a dark fire in his eyes. "I'm coming back for you."

Then the killings start. Killings of people Johnny didn't like. And Johnny's car is dredged up, empty.

Quite simply one of the books that made me want to become a writer. I adore this book. I wish I'd written it. – Steven Savile

It had to be heaven, because hell could never be this cold.

Johnny lay hunched under the mouldy-smelling covers, staring up at the ceiling and trying to find some point of access into his memory. It was like running through a deck of empty cards. He didn't know where he was or how he came to be here, and he didn't know why he'd come around with such a headache and such a desperate thirst. Had he been ill? Johnny hated to be ill. Sick people made him angry, sucking up all the attention from everyone around them, because when Johnny felt bad he always had to crawl off like a dog and suffer alone.

What if it was a brain tumour? The idea of a brain tumour had always fascinated and terrified him, even more than the thought of a stroke. The thought of a stroke just terrified him, period. He closed his eyes and tried to get his mind back up to speed, but his mind didn't want to respond. He felt as if he was wandering around in a strange house, bumping into sheeted furniture. What he needed was something, any one thing, that he could pick out and hold onto, some notion that was safe and unambiguous, and then he could take it from there.

He thought he had it.

Maybe he'd taken a hammering. Some of those fairies in the gay clubs lifted weights, and it showed. And they might just about have had the nerve, in some unlit back alley with bags over their heads, and Johnny getting out of his car alone and without looking around him first...

But no. Such a scene had no place in Johnny's self-image, which was widescreen and in full colour and played to a continuous John Barry soundtrack. If Johnny Mays was going to suffer then he'd be Spartacus on the cross, and nothing so pitiful as a victim.

There, now, he thought. Isn't that something to hang onto?

And then he opened his eyes again.

The ceiling above him was angled, and decorated in a woodchip paper that had become waterstained and dotted with black spores. Cheap and old, he thought. I'm somewhere cheap and old. Holding up the ceiling was a thick beam dotted with woodworm holes, and on the beam hung a silver-painted horseshoe — not just some ornament but the real thing, coarse and heavy and beaten out on an anvil.

And if he wanted to know anything more, he was at least going to have to move his head.

Ten minutes later he was sitting on the edge of the mattress and fighting the almost overpowering urge to let himself fall back into the outspread arms of something that, as he now half-appreciated with a sense of unspoken awe, might actually prove to be a state darker and more permanent than sleep. Physically he was at his limits, and that was no exaggeration. He was starved and he was dehydrated, and even his kidneys hurt.

His clothes were gone and he was wearing stale pyjamas that hung on him like a tent. He'd been lying on an unmade bed and covered by a heap of old overcoats. On the floor by the bed were an empty soup-bowl and spoon. The only heat in the room was from a single-bar electric fire that seemed to be having no effect at all; Johnny was racked by uncontrollable shivers, and so he reached for one of the overcoats with the idea of pulling it on.

There wasn't much else to see. It was a room from deep in his past, the kind of grim bedchamber that as a child he'd always associated with elderly relatives and the smell of embrocation. A cast-iron fireplace and a threadbare carpet, a wardrobe like an oak sarcophagus, a squat and ugly chest of drawers in matching timber... even the daylight in here seemed strained and enfeebled, and to speak of times long gone and best forgotten.

With his arms finally into the sleeves and the sleeves hanging down over his knuckles, Johnny tried to stand.

The room was dim but the landing outside was darker, and when he tried to call out he could manage no louder sound than the whisper in which he'd spoken his own name - how long ago, now? It was impossible to tell. Johnny had no illusions about the seriousness of his situation, here. Something vital hung in the balance, and although he didn't know its name he knew that his opportunities to influence the outcome were diminishing by the minute.

Creaking like a scarecrow, he made his unsteady way downstairs.

From the living-room window he could see one end of a stone-walled yard with open country beyond. There were hills in the near distance, bleached of detail by a fine mist that wasn't quite rain. The yard stones were a deep, slaty green, as probably was the house itself. Somewhere outside a solitary cow or calf was lowing in distress, but Johnny ignored it. He had problems enough of his own.

It was even colder down here than it had been upstairs. There had been a fire in the living room grate, but it had burned out and its ashes weren't even warm. By the hearth, in the room's only armchair, sat the tenant of the cottage. He was at least sixty years old, thin and weatherbeaten and not too strong-looking, and like the fire he was several days dead. His fingers were locked like claws onto the arms of the chair, as if in reaction to a spasm of agony that had hit and killed him with the speed and surprise of an unscheduled train.

Johnny studied the slack face, but not for long. Death didn't look so remarkable on old people, he always thought. He went looking for something to eat.

He found his clothes in the kitchen. They'd been hung out on a clotheshorse to dry, but they looked pretty well ruined. He couldn't remember how. On the well-worn plastic cloth that covered the table, the contents of his pockets had been spread out.

His black book was there.

It was swollen and impossible to open, but he felt a strange excitement as if he now held the key to everything - who and what he'd been, where he was heading, the strange rite of passage that he was undergoing now. It didn't matter that he couldn't actually read the pages. He'd never known his mother to open a copy of the Bible, although she'd always claimed it to be on her side when she was laying down the law and he'd grown up with the name of the book ringing in his ears like a doorbell.

No, this was all that he'd need. This for the spirit, and some fuel for the guttering flames way down in the Johnny Mays boiler room.

It was an old man's kitchen, plain painted cupboards meagrely stocked, but one of the cupboards was filled with Heinz soup cans in cardboard boxes. Johnny took two and then, as an afterthought, took another. He moved back through the living room and past the fireside tableau of death without a second look.

He stopped at the turning of the stair, where a framed mirror hung. He'd gone by without seeing it on the way down. Most of its silvering had peeled, but enough remained to catch his reflection like a passing fugitive.

He started to feel panic. He didn't recognise the haunted, unshaven wreck who looked back at him.

But then, after a moment, it was as if some cutout kicked over. It didn't matter. Nothing mattered. Stop thinking, Johnny, you just aren't ready for it. Concentrate on the job in hand.

Concentrate on your comeback.

In the bedroom, he crouched before the electric fire. He hacked open the first of the cans with the end of the dirty spoon from the bedside bowl.

And then, with utter concentration, he began to eat the soup cold from the can.