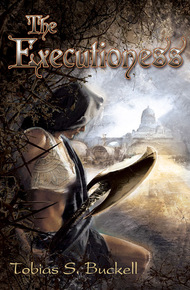 Born in the Caribbean, Tobias S. Buckell is a New York Times Bestselling author. His novels and over 50 stories have been translated into 17 languages. He has been nominated for the Hugo, Nebula, and John W. Campbell Award for Best New Science Fiction Author. He currently lives in Ohio.

The Executioness by Tobias S. Buckell

Magic has a price. But someone else will pay. Every time a spell is cast, a bit of bramble sprouts, sending up tangling vines, bloody thorns, and threatening a poisonous sleep. It sprouts in tilled fields and in neighbors' roof beams, thrusts up from between street cobbles, and bursts forth from sacks of powdered spice. A bit of magic, and bramble follows. A little at first, and then more—until whole cities are dragged down under tangling vines and empires lie dead, ruins choked by bramble forest. Monuments to people who loved magic too much.

In the paired novellas, The Alchemist and The Executioness, award-winning authors Tobias Buckell and Paolo Bacigalupi explore a shared world where magic is forbidden and its use is rewarded with the axe. A world of glittering memories and a desperate present, where everyone uses a little magic, and someone else always pays the price.

Tobias Buckell is one of my students from the 2000 Writers of the Future workshop and I've remained in touch ever since, and I've been very proud to see his successful career, even hitting the New York Times bestseller list. His partner on this project, Paolo Bacigalupi, is also a friend and a fellow Colorado writer, last seen in the crowded halls of the Denver Comic Con and in a quiet mountain coffee shop where we both had (coincidentally gone for a writer's retreat.) – Kevin J. Anderson

It's difficult to sell your last bed to a neighbor. More difficult still when your only child clings like a spider monkey to its frame, and screams as if you were chopping off her arms with an axe every time you try to remove her.

The four men from Alacan had already arrived, hungry and happy to make copper from the use of their muscles, and Lizca Sharma was there as well, her skirts glittering with diamond wealth, there to supervise the four-poster's removal and make sure it wasn't damaged in the transfer.

The bed was a massive piece of furniture. For a child, ridiculous. Jiala's small limbs had no need to sprawl across such a vast expanse. But the frame had been carved with images of the floating palaces of Jhandpara. Cloud dragons of old twined up its posts to the canopy where wooden claws clutched rolled nets and, with a clever copper clasp, opened on hinges to let the nets come tumbling down during the hot times to keep out mosquitoes. A beautiful bed. A fanciful bed. Imbued with the vitality of Jhandpara's lost glory. An antique made of kestrel-wood—that fine red grain so long choked under bramble—and triply valuable because of it.

We would eat for months on its sale.

But to Jiala, six years old and deeply attached, who had already watched every other piece of our household furniture disappear, it was another matter.

She had watched our servants and nannies evaporate as water droplets hiss to mist on a hot griddle. She had watched draperies tumble, seen the geometries of our carpets rolled and carried out on Alacaner backs, a train of men like linked sausages marching from our marbled halls. The bed was too much. These days, our halls echoed with only our few remaining footfalls. The porticos carried no sound of music from our pianoforte, and the last bit of warmth in the house could only be found in the sulphurous stink of my workshop, where a lone fire yet blazed.

For Jiala, the disappearance of her vast and beautiful bed was her last chance to make a stand.

I tried to cajole her, and then to drag her. But she'd grown since her days as a babe, and desperation gave her strength. As I hauled her from the mattress, she grabbed hold of one huge post and locked her arms around it. She pressed her cheek against the cloud dragon's scales and screamed again. "NOOOOOOOO!"

We all covered our ears as she hit a new crystal-shattering octave.

"I don't want a new one!" she screamed. "I want this one!" Tears ran down her reddening face.

I tugged at her, embarrassed under the judging gaze of Mistress Lizca and the workmen behind me. I liked Lizca. And now she saw me at my most reduced. As if the empty house wasn't enough. As if this sale of my child's last belonging was not humiliating in the extreme, I now begged a child for cooperation.

"Jiala. It's only for a little while. And it will just be down the narrows at Mistress Lizca's. You can visit if you like." I looked to Lizca, hoping desperately that she wouldn't contradict. "It will be just next door."

"I can't sleep next door! This is mine! You sold everything! We don't have anything! This is mine!" Jiala's shrieks rose to new levels, and this brought on her coughing, which alternated with her screams as I tried to pry her arms free.

But she only screamed louder.

The workmen kept their hands over their ears as the gryphon shrieks continued. I cast about, desperate for a solution to her heartbreak. Desperate to stop the coughing that she was inflicting on herself with this tantrum.

Stupid. I'd been stupid. I should have asked Pila to take her out, and then ordered the workmen to come stealthy like thieves. I cast about the room, and there on the workmen's faces, I saw something unexpected. Unlike Lizca, who stood stonily irritated, the workmen showed nothing of the sort.

No superiority nor disgust.

These refugee workmen, come across the river from Lesser Khaim to do a bit of labor for a few coppers, pitied me. Soiled linen shirts draped off their stooped shoulders and broken leather shoes showed cold mudcaked winter toes, and yet they pitied me.

They had lost everything fleeing their own city, their last portable belongings clanking on their backs, their hounds and children squalling and snot-nosed, tangled around their ankles. Flotsam in a river of refugees come from Alacan when their Mayor and Majisters accepted that the city could not be held and that they must, in fact, fall back—and quickly—if they wished to escape the bramble onslaught.

Alacan men, men who had lost everything, looked at me with pity. And it filled me with rage.

I shouted at Jiala. "Well, what should I do? Should I have you starve? Should I stop feeding you and Pila? Should we all sit in the straw and gnaw mice bones through the winter so that you can have a kestrel-wood bed?"

Of course, she only screamed louder. But now it was out of fear. And yet I continued to shout, my voice increasing, overwhelming hers, an animal roar, seeking to frighten and intimidate that which I could not cajole. Using my size and power to crush something small and desperate.

"Shut up!" I screamed. "We have nothing! Do you understand? Nothing! We have no choices left!"

Jiala collapsed into sobbing misery, which turned to deeper coughing, which frightened me even more, because if the coughing continued I would have to cast a spell to keep it down. Everything I did led only to something worse.

The fight went out of Jiala. I pried her away from the bed.

Lizca motioned to the Alacaners and they began the process of disassembling the great thing.

I held Jiala close, feeling her shaking and sobbing, still loud but without a fight now. I had broken her will. An ugly solution that reduced us both into something less than what the Three Faces of Mara hoped for us. Not father and daughter. Not protector and sacred charge. Monster and victim. I clutched my child to me, hating what had been conjured between us. That I had bullied her down. That she had forced me to this point.

But hating myself, most of all, for I had placed us in this position.

That was the true sickness. I had dragged us into danger and want. Our house had once been so very fine. In our glory days, when Merali was still alive, I made copper pots for rich households, designed metal and glass mirrors of exquisite inlay. Blew glass bargaining bulbs for the great mustached merchants of Diamond Street to drink from as they made their contracts. I engraved vases with the Three Faces of Mara: woman, man, and child, dancing. I etched designs of cloud dragons and floating palaces. I cast gryphons in gold and bronze and copper. I inlaid forest hunts of stags and unicorns in the towering kestrel forests of the East and sculpted representations of the three hundred and thirty-three arches of Jhandpara's glorious waterfront. I traded in the nostalgic dreams of empire's many lost wonders.

And we had been rich.

Now, instead of adornments for rich households, strange devices squatted and bubbled and clanked in my workroom, and not a single one of them for sale. Curving copper tubes twisted like kraken tentacles. Our impoverished faces reflected from the brass bells of delivery nozzles. Glass bulbs glowed blue with the ethereal stamens of the lora flower, which can only be gathered in summer twilight when ember beetles beckon them open and mate within their satin petals.

And now, all day and all night, my workroom hissed and steamed with the sulphurous residues of bramble.

Burned branches and seeds and sleep-inducing spines passed through my equipment's bowels. Instead of Jhandpara's many dreams, I worked now with its singular nightmare. The plant that had destroyed an empire and now threatened to destroy us as well. Our whole house stank day and night with the smell of burning bramble and the workings of my balanthast. That was the true cause of my daughter's pitched defense of her kestrel-wood bed.

I was the one at fault. Not the girl. I had impoverished us with every decision I had made, over fifteen years. Jiala was too young to even know what the household had looked like in its true glory days. She had arrived too late for that. Never saw its flowering rose gardens and lupine beds. Didn't remember when the halls rang with servants' laughter and activity, when Pila, Saema and Traz all lived with us, and Niaz and Romara and—some other servant whose name even I have now forgotten—swept every corner of the place for dust and kept the mice at bay. It was my fault.

I clutched my sobbing child to my breast, because I knew she was right, and I was wrong, but still I let Mistress Lizca and her Alacan workmen break the bed apart, and carry it out, piece by piece, until we were alone in an empty and cold marble room.

I had no choice. Or, more precisely, I had stripped us of our choices. I had gone too far, and circumstances were closing upon us both.