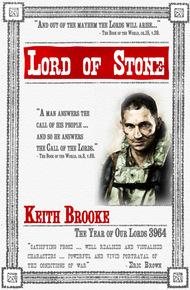 Lord of Stone by Keith Brooke

Bligh: a young foreigner, drawn irresistibly to the war in Trace. A man who has rejected religion, yet appears to be possessed by one of the six Lords Elemental. Bligh thinks he's going mad, but if he is then it's a madness shared by others...

Gritty and passionate, Lord of Stone is a fantasy for the new millennium by the acclaimed author of The Accord and Genetopia.

This is a personal favourite among my novels, a story set in the immediate aftermath of a terrible civil war in a fictitious country based on 1930s Spain. Lord of Stone tells the story of a man many believe to be a reincarnated god in a world where magic is losing its hold. – Keith Brooke

The ragged people were all around him, staring and shouting and waving their fists. Bligh looked down at the rounded stones lying scattered in the fire. Had he kicked them there? He did not know.

He remembered hiding in the ruins, looking down at all these people as they performed their calling to the Gods, the Prayer of the Body.

Yet now he was here in their midst and the people were enraged by his incursion.

"No!" he said, again. Nobody moved. The only other noise was the incessant clatter of a small radio, tuned in to a southern music station. "This is wrong," he cried. "You can't do this. It's sick. Do you think that if the Lords were among you they would recognise – " he gestured " – this as anything but a cheap sham? Do you? There is nothing Holy about this charade. Nothing! It's sick..." He was losing track. He did not know where he had found the words, or even what they meant.

He looked around at the people in their filthy tatters, gathered in the ruins where they were forced to make their home. These poor people were desperate, they needed something to believe, something to give their empty existences some kind of meaning.

As he studied their faces Bligh realised that the time for violence had passed and he was safe, for now. The mood of the gathering was returning to the passionate fervour of before, only now the atmosphere had been subtly transformed.

The people moved away, found their drinks and started to talk and laugh. Lila, kneeling at Bligh's feet, hooked her hand into the waistband of his trousers and pulled him towards her. Her cheeks were smeared with tears and dirt from the ground. Her daughter was there too, pressing a jug of wine at him, small eyes pleading with him to accept it.

He did not understand these people's response. He had wrecked their ceremony but they hardly seemed to care any more. He drank, long and deep, then passed the jug to Lila and watched as she pressed it to her lips.

She paused to touch the corner of her mouth. It was swollen, engorged with blood. He did not remember striking her – had it been him?

Someone turned the radio up louder, its music insistent, shrill. Bligh tried to come to terms with what was happening to him. The steady pressure in his head was frightening, a sure sign that he really was insane. He felt himself to be right on the edge of some mental precipice. It would not take much...

"I hear voices," he said quietly. He had to explain, had to find the words from somewhere. "My head ... I can't keep track of it all. I see bodies, too. All day, all night. They talk to me." He drank more wine and focused on its heat in his belly. "I'm mad," he said. "Mad."

He drank some more.

Later, the old man started his chant again. Nobody paid him any attention at first, but gradually the people stopped talking and silenced the radio. In their ones and twos they turned to watch, then started to clap out his complex rhythm. Bligh felt no anger now, only a mellow sense of well-being that centred in his gut and rippled outwards.

He did not object when Lila rose from where she had been sitting, head on his shoulder, hand on his thigh. He watched as she found the movements of her dance once again, her eyes locked unblinking on his. He drank some more from the jug of wine.

After a few minutes, she started to wail that twisting note that had reached right inside Bligh earlier in the evening. She wrapped her arms around her body, pulling at her clothes, teasing, and all the time her eyes were fixed on Bligh's.

It crept up on him stealthily.

Sitting, watching, drinking ... then suddenly he was out in the cleared dirt space with Lila, crying aloud, the old man's chant pulling Bligh's body about as if he was a marionette jerked by some mad puppeteer's wires. He clutched at his head, trying to interrupt the pattern and stop, but still his body jerked and twisted and that awful chant pounded through his head. All he knew was the fire, the insane twitching of his body, the undying, timeless rhythm battering the inside of his skull.

At some point – he knew no sense of time – things started to change. A new rhythm, a new chant, supplanted the old. The voices of the people were all around, the people with whom he had shared this grim little shanty town. All chanting a single word, over and over again. "Who?" they cried. "Who? Who? Who?"

He did not understand, but he sensed that he did not have to understand.

Somewhere in his head: the pressure, transforming. Rising through the levels of his mind, bursting forth to take over his senses and submerge all that he was, all that he had ever been.

Expanding, a force that would destroy him and know no different. Rising up to take over.

He stood and spread his hands, and then there was sudden silence.

"Who?" said the old man, eventually, his chin glistening with saliva and sweat.