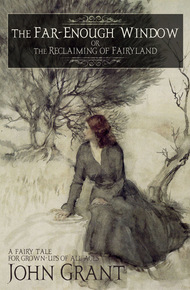 John Grant is the author of some seventy books. His nonfiction has included The Encyclopedia of Walt Disney's Animated Characters, The Encyclopedia of Fantasy (with John Clute), and a series of books on the misuse and misunderstanding of science, begun with Discarded Science and continued most recently with Denying Science. For his nonfiction work he has received the Hugo (twice), the World Fantasy Award, and a number of other awards and nominations. His fiction has included novels like The World, The Far-Enough Window and The Dragons of Manhattan as well as numerous short stories, some of which have been collected as Take No Prisoners and, in late 2014, Tell No Lies.

For a number of years he edited the fantasy artbook publisher Paper Tiger, for this work receiving a Chesley Award as well as a World Fantasy Award nomination.

His A Comprehensive Encyclopedia of Film Noir, the largest film noir encyclopedia in the English language, was published in October 2013. Debunk It!, designed for young adult readers, came out in early 2015, and Spooky Science, for grownups, is scheduled for Fall 2015. He writes regularly about movies at Noirish.

He lives in rural New Jersey with his wife and too many cats.

The Far-Enough Window by John Grant

For as long as she can remember, Joanna has lived on a remote estate with only her dog and an old housekeeper for company. One day, when she goes to write up her diary she finds that she seems already to have done so—and this discovery leads her to a distant wing of the crumbling mansion ... and to the Far-Enough Window. Under the guidance of Robin Goodfellow, who has been waiting for her beside it, she peers farther than the eye can see to transport herself to Fairyland.

But this is a Fairyland unlike any she has ever heard of! Here nothing is ever as it seems, as the fey creatures of mythology vie with the cozy little fairies she's read about in children's books. Joanna must tread a complex and hazardous path to find her way back to her own present. If she succeeds, perhaps the mysteries of her own strange life will be answered.

Filled with constant astonishments, The Far-Enough Window—a classic fantasy by Hugo- and World Fantasy Award-winning writer John Grant—is a work of great beauty that challenges the mind at every ingenious twist and turn. It is a novel for anyone who can remember burrowing under the bedclothes with a flashlight so their parents wouldn't know they were still reading.

I love this story! I know I should attempt to be more objective here and tease out the many reasons why you should want to read it, but sometimes you just have to go with your first response. The Far-Enough Window is a delightfully playful updating of the fairytale form, retaining both the genre's charm and its darker edge, but with a modern, knowing sensibility. This is its first ebook publication, exclusive to this bundle. – Keith Brooke

At first Joanna thought Mr Dogg was dead. He lay sprawled out on the dusty floor, his eyes closed and his toothy mouth open, his flanks motionless. But as she ran her fingers through the coarse hairs of his side she could feel that his flesh was warm.

'He's all right,' said Robin Goodfellow, materializing beside her. 'Haven't you been noticing that the clouds are not moving, either?' He pointed out through the murk of one of the turret chamber's tall rectangular windows. 'That tail of cloud that looks like a grandfather's chin is still halfway across the disc of the sun, just as it was an hour ago when you first came up here.'

Joanna was unsurprised. Stopping time for a while was something she'd often dreamed of being able to do—and, even more so, speeding up time—so it seemed only natural that Robin Goodfellow should number it among his tricks.

'How long can you do this for?' she said.

'Forever and a day,' he said. 'What else would you expect me to reply, gracious lady?' He leaned towards her confidentially. 'To tell you the truth, Joanna,' he whispered, 'that extra day's a real killer in practice, but I add it on just so as not to disappoint folk, and hope I'll never have to actually do it.'

Laughing, she aimed a mock blow at him, and he hopped nimbly away.

Robin Goodfellow looked at her doubtfully. 'Forgive my boyish impertinence,' he said, 'but I don't think you yet quite understand what seeing far enough actually entails. It'll be all right for you, for am I not your liege-servant, sworn to protect you from harm? But the hound already knows the nature of the Farness, so I cannot be liege to him. If he's in the Farness with us, he is his own master, there of his own accord.'

'You talk as if we were actually going there,' said Joanna, 'not just seeing it through the window.'

Robin Goodfellow looked puzzled for an instant; then his face cleared. 'It's as I thought,' he muttered to himself. He gazed into her eyes and said: 'That's what I meant when I said you didn't know what this entailed, Joanna.