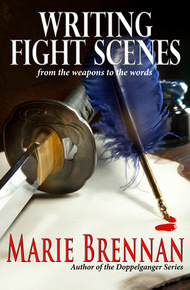 Marie Brennan is an anthropologist and folklorist who shamelessly pillages her academic fields for material. She is currently misapplying her professors' hard work to the Victorian adventure series The Memoirs of Lady Trent; the first book of that series, A Natural History of Dragons, was nominated for a World Fantasy Award. She is also the author of the doppelanger duology of Warrior and Witch, the urban fantasy Lies and Prophecy, the Onyx Court historical fantasy series, and more than forty short stories.

When she's not obsessing over historical details too minute for anybody else to care about, she practices shorin-ryu karate and pretends to be other people in role-playing games (which sometimes find their way into her writing).

Even if your answer is "no," you can still write a good fight scene. In this guide, fantasy novelist Marie Brennan will show you how. Drawing on her experience with fencing, stage combat choreography, Okinawan martial arts, and above all writing, she lays out the components that turn the strikes into a compelling story.

From purpose to tactics to prose, Writing Fight Scenes walks you through the anatomy and execution of combat on the page.

As indie publishing began to take off, a group of like-minded writers formed the Book View Café as a coop of publishing and marketing. They've gathered quite a solid library of fiction and nonfiction, and when I was looking for the best writing tools to include in this StoryBundle, I snooped through the entire Book View Café catalog. Marie Brennan's Writing Fight Scenes caught my eye—how useful is that? I have never met Marie, but I know her book is packed with information every action writer needs to know. – Kevin J. Anderson

THE PHILOSOPHY OF A FIGHT SCENE

So you're working on a story, and there comes a point where it really ought to have a fight scene. But you're sitting there thinking, "I'm not a martial artist! I'm not a member of the SCA! I have no idea how to fight!" Or maybe you're thinking, "Fight scenes are so boring. I'd rather just skip over this and get back to the actual story." Or something else that makes you dread writing that scene, rather than looking forward to it with anticipation.

Don't worry, dear reader. I'm from the Internet, and I'm here to help.

To the first group, I say: the details of how to fight are possibly the least important component of a fight scene. The crucial components are the same ones you're already grappling with in the rest of your writing—namely, description, pacing, characterization, and all that good stuff.

To the second group, I say: it's only boring if the author does it wrong.

My Gospel of Combat is that a fight is part of the story. Just like any other scene. It isn't—or shouldn't be—pure spectacle, especially in prose. Movies may be able to get away with that approach, but it's harder on the page, because words don't work very well for describing movement. If you want to be precise, you slow the pace down far beyond the speed of what you're describing. If you want to maintain the pace, you lose precision. And if you want to be precise and efficient, you have to resort to jargon. "Glissade, pas de bourrée, jeté, assemblé" quite accurately describes a sequence of ballet steps in about the time it takes to perform them . . . but unless you know what those terms mean, it's completely useless to you as a reader.

In prose, a good fight scene is not one that leaves you with a complete mental image of every attack and block. It's one that conveys story. Furthermore, just like a conversation or an investigation or a sex scene (the latter of which shares many technical challenges with a fight scene), it should ideally be serving more than one narrative purpose at a time.

Fights are often in the story for plot reasons: kill the bad guy. Get past the guards. Suffer an injury that will be relevant later. That's fine, but not enough. Personally, I love fight scenes because they can do so much on a character level. This is violence; it's one of the most fundamental things hard-wired into our brains, alongside food and sex. What a character is and is not willing to do, when it comes down to fists or swords or guns, can reveal or change or confirm some fairly profound things about her personality. It can even play into or against the themes of a story, especially when you think about the way societies in every part of the world have built philosophical frameworks around the control and deployment of violence. Of course, there's the artistic side, too; fight scenes can be just as much about good writing—description and so on—as anything else in the story.

If the scene isn't doing anything terribly important on any of those fronts, then it doesn't deserve much attention on the page. Drop in a sentence or two to say it happened, and get on with the actual story. Or figure out why this fight matters, and make it earn its keep.

Think back to my anecdote from the introduction, about the college production of Troilus and Cressida. That fight revealed ugly things about both of the participants: Diomedes was the kind of untrustworthy bastard who would cheat by pulling a knife the moment he started losing, and Troilus was the kind of violent bastard who would enjoy beating his nemesis to death. This didn't mean as much in Diomedes' case; he's Troilus' enemy, therefore the villain, therefore expected to act in an underhanded manner. But Troilus? He was supposed to be the hero—or at least the protagonist, since his name is in the title. Except this is Troilus and Cressida, the play without a moral center, in which everybody is some flavor of bastard. Sending Troilus over that edge fed into the overall force of the play. Had Troilus come close to the edge, but then decided not to kill Diomedes, it would have been a different kind of pivotal moment: one in which he chose to reject the self-serving amorality of those around him and hold himself to a better standard. Which is also different from the Doctor (of Doctor Who) forgoing the chance to kill someone; in the Doctor's case, it's a confirmation of what we already know about him as a person. But all of those are dramatic moments, because they force the character to a crisis point, one with non-trivial stakes riding on its outcome.

Even when the matter isn't life-or-death, violent actions can be very telling. Holly McClane decking the reporter at the end of Die Hard is part and parcel of that entire story: her role, her husband's, the reporter's, and everything that's gone on in that (very violent) movie. In Tamora Pierce's Song of the Lioness series, Alanna sparring against her old friends after they've learned she's a woman highlights all the weird tensions that surround her position as a lady knight. The few seconds Sam and Dean Winchester spend fighting each other in the pilot episode of Supernatural tell us that these guys know what they're doing, are very familiar with each other's moves, and have a bit of sibling rivalry going on. You could try to convey all that with dialogue, but the fight is more efficient—and also more subtle, in its own way. It's the old adage of writing advice: show, don't tell.

If your scene is important enough to merit the reader's attention, then there's something important going on in it. Something that has less to do with strikes and blocks, and more to do with the progress of the story. You can get surprisingly far by focusing on the latter, instead of the former, though we'll talk in due course about how to do both. When all is said and done, very few readers will remember the moment where the hero did the binding parry to two and riposted. What they'll remember is what that moment meant.