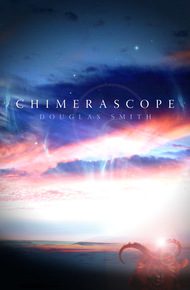 Chimerascope is Doug's first full collection of short fiction, containing sixteen of his best stories, including an Aurora Award winner, a Best New Horror selection, and eight Aurora finalists. Sixteen stories of fantasy and science fiction that take you from love in fourteenth-century Japan to humanity's last stand, from virtual reality to the end of reality, from alien drug addictions to a dinner where a man loses everything.

With an introduction by award-winning author and editor, Julie Czerneda.

They stopped beating Trelayne when they saw that he enjoyed it. The thugs that passed as cops in that town on Long Shot backed away from where he lay curled on the dirt floor, as if he was something dead or dangerous. He watched them lock the door of his cold little cell again. Disgust and something like fear showed in their eyes. The taste of their contempt for him mixed with the sharpness of his own blood in his mouth. And the Scream in that blood shot another stab of pleasure through him.

He expected their reaction. The Merged Corporate Entity guarded its secrets well, and Scream was its most precious. Long Shot lay far from any Entity project world and well off the jump route linking Earth and the frontier. No one on this backwater planet would know of the drug, let alone have encountered a Screamer or an Angel. That was why he had picked it.

Their footsteps receded, and the outer door of the plasteel storage hut that served as the town jail clanged shut. Alone, he rolled onto his side on the floor, relishing the agony the movement brought. He tried to recall how he came to be there, but the Scream in him turned each attempt into an emotional sideshow. Finally he remembered something burning, something...

It had been one of their better shows.

He remembered now. Remembered last night, standing in the ring of their makeshift circus dome, announcing the performers to an uncaring crowd, crying out the names of the damned, the conquered. Each member of his refugee band emerged from behind torn red curtains and propelled themselves in the manner of their species into or above the ring, depending on their chosen act.

He knew the acts meant little. The crowd came not to see feats of acrobatics or strength, but to gawk at otherworldly strangeness, to watch aliens bow in submission before the mighty human. Trelayne's circus consisted of the remnants of the subjugated races of a score of worlds, victims to the Entity's resource extraction or terraforming projects: the Stone Puppies, lumbering silica beasts of slate-sided bulk—Guppert the Strong, squat bulbous-limbed refugee from the crushing gravity and equally crushing mining of Mendlos II—Feran the fox-child, his people hunted down like animals on Fandor IV.

But curled in the dirt in the cold cell, recalling last night, Trelayne pushed away any thoughts of the Angels. And of her.

Yes, it had been a fine show. Until the Ta'lona died, exploding in blood and brilliance high above the ring, after floating too near a torch. Trelayne had bought the gas bag creature's freedom a week before from an ip slaver, knowing that its species had been nearly wiped out.

As pieces of the fat alien had fallen flaming into the crowd, Trelayne's grip on reality had shattered like a funhouse mirror struck by a hammer. He could now recall only flashes of what had followed last night: people burning—screaming—panic—a stampede to the exits—his arrest.

Nor could he remember doing any Scream. He usually stayed clean before a show. But he knew what he felt now lying in the cell—the joy of the beating, the ecstasy of humiliation. He must have done a hit when the chaos began and the smell of burnt flesh reached him. To escape the horror.

Or to enter it. For with Scream, horror opened a door to heaven.

Someone cleared their throat in the cell. Trelayne jumped, then shivered at the thrill of surprise. Moaning, he rolled onto his back on the floor and opened his eyes, struggling to orient himself again.

A man now sat on the cot in the cell. A man with a lean face and eyes that reminded Trelayne of his own. He wore a long grey cloak with a major's rank and a small insignia on which a red "RIP" hovered over a green planet split by a lightning bolt.

The uniform of RIP Force. A uniform that Trelayne had worn a lifetime ago. Grey meant Special Services: this man was RIP, but not a Screamer. RIP kept senior officers and the SS clean.

The man studied a PerComm unit held in a black-gloved hand, then looked down at Trelayne and smiled. "Hello, Captain Trelayne," he said softly, as if he were addressing a child.

Trelayne swallowed. He was shaking and realized he had been since he had recognized the uniform. "My name is not Trelayne."

"I am Weitz," the man said. The PerComm disappeared inside his cloak. "And the blood sample I took from you confirms that you are Jason Lewiston Trelayne, former captain and wing commander in the Entity's Forces for the Relocation of Indigenous Peoples, commonly known as RIP Force. Convicted of treason in absentia three years ago, 2056-12-05 AD. Presumed dead in the MCE raid on the rebel base on Darcon III in 2057-08-26."

Trelayne licked his lips, savouring the flavour of his fear.

"You're a wanted man, Trelayne." Weitz's voice was soft. "Or would be, if the Entity knew you were still alive."