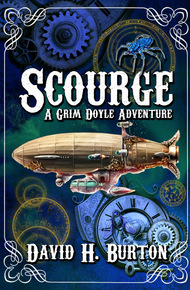 Grim Doyle has always known his life was not exactly "normal", and things get even more curious when he discovers a set of stones that sweep him and his family to the fantasy, steampunk world of Verne - a place they had escaped from years ago. Now that they've returned, Grim and his siblings hide from the evil Lord Victor and his minions. And while learning about Jinns, Mystics, and the power of absinth they try to discover who is trying to kill them with the deadly Scourge.

There were three things that were a little different about Grimwald Doyle.

To begin, Grimwald had two dads.

He was fine with that. Two dads were better than none.

Second, there were six children running around his house. Yes, six. But out of the five others, only one was Grimwald’s real sister.

Lastly, was the house. It was filled with oddities — clock-like gadgets, metal objects that spat out steam when least expected, and geared-up devices that crept across the floor all by themselves.

No, things in his house were not exactly… normal.

Grimwald, or Grim as he preferred to be called, had very few friends and no longer invited them over. It was complicated enough explaining that you had siblings that were unrelated to you. Never mind that you had two dads. But having to apologize for your Pop running around the house chasing after an artificial brass mouse that accidentally activated a suit of armor to spring to life and take a swing at the head of your best friend … well, that was something else entirely.

Not for any ten year old that he knew.

He approached that very suit of armor now as he descended the staircase. After the incident with his best friend, or rather, his former best friend, the cumbersome mace and sword were removed from the suit of armor, until Poppa could tweak it to recognize an intruder rather than just swinging at anything in its path. It stood facing the front door, and it even seemed to slump a little, as if it had been punished.

As he took the last step down, a loud thump caught his attention and Grim threw himself against the wall. The twins pounded down the staircase behind him.

Barny said nothing in response, but the smile of mischief on his eight-year-old face was matched by that of his brother.

"Hi, Grim!" they both shouted as they whizzed towards the kitchen.

Grim peeled himself from the wall. "What’s wrong with you two!"

They both laughed and disappeared into the yard.

He hadn’t taken two more steps before something twittered at his feet. It was a brass mouse, the same one that had cost him his best friend. It stopped to look up at him as if trying to apologize for its previous misdemeanor. Grim kicked at it and it scurried into the front room.

He followed it and found Sam calling the mouse over to him. Sam wasn’t his real brother either. He had different birth parents. Grim smiled at him and noticed who sat next to him with metal cogs and parts laid out on the floor before her.

She was ten months older than Grim. That meant she was the oldest, although they were born in the same year.

As far as Grim was concerned, they were the same age. Rudy didn’t see it that way. And she often reminded him of it.

She sat and studied the parts in front of her. It looked like she was attempting to make a mechanical mouse just like Poppa had made. Except bigger.

After the incident that had cost Grim his friend, Rudy was bent on making another one.

He offered her as nice a smile as he could muster. She offered one back he knew was as fake as his. Grim moved along, leaving Sam to play with his sister.

When he got to the kitchen, there was yet another room occupied. This time it was Ellen. In a black dress with frilly lace and delicate shoes that were far too princess-like for Grim’s liking, she sat at the table with one of her dolls. She was Grim’s real sister.

Ellen smiled a toothy grin. At the age of six, she still had all her baby teeth. She held up the doll. Its head had been ripped off; and not cleanly at that.

Grim rolled his eyes. Ellen was the other female sibling in the house, and the closest thing to a serial killer among the lot.

"Whatcha doin’?" he asked with hesitation. He wasn’t sure he really wanted to know.

"Sissy doesn’t have any blood," Ellen said. There was a pout on her little mouth, as if she were disappointed to find that her doll had been lifeless all along.

Ellen’s lips twisted. "Duh, I know that!" She then walked out of the kitchen, leaving the head behind.

Grim sighed, picked it up and idled back up the stairs.

This was going to be a very long summer. No friends, nowhere to go, nothing to do. He was going to have himself a big box of boredom this year.

He walked past Rudy and Ellen’s room, with the mound of doll heads in the corner. He chucked Sissy’s head onto the growing pile and moved on.

He passed the twins’ door. It had a sign that read "No girls allowed." Grim looked out their window. The two were still outside trying to lop each other’s heads off with sticks. Big ones.

In the room next door, Grim plopped onto his own bed and when he thought he was about to have a moment of peace, Sam came in. As usual, Sam’s hair was a mess and he was covered in dog hair. He was three years younger and looked almost identical to Rudy, except for the ridiculous pigtails. He also wore the same gigantic glasses as the rest of them. They obscured his freckled face, and he was constantly pushing them up because they would slide off his little nose. He was followed by Toby, their dog — although the Basset Hound seemed to be more Sam’s dog than anyone else’s. The thing followed him everywhere.

Grim heard the twins stream back inside. The door slammed behind them. He braced himself, waiting for what would follow.

"Grimwald!" shrieked a voice from downstairs.

There was one last complication to Grim Doyle’s life: Aunt Patrice. And that’s not ANT, like you’d pronounce the insect, but more like you are at the doctor’s office and he tells you to say AAAHHH while he jabs a popsicle stick down your throat. So that would be AAAHHHNT Patrice ? hold the gagging, please.

The woman was older than the hills and watched Grim like a hawk. She would often say things like: Don’t run up and down the stairs; You can go outside, but stay where I can see you; or worse: Why don’t you put on this handsome blue suit and top hat?

Aunt Patrice was tall and spindly, and she smelled of mothballs. Her hair was tied back in a bun so tight Grim was sure the pressure must have been the cause for her frequent migraines. She also squinted a lot and Grim thought his Aunt might save her eyes the strain if she actually wore the glasses that hung around her long and slender, turkey-wattled neck.

Grimwald. He hated his name. And she was the only one who called him that. Even Rudy refrained from calling him by his full name, but then again, her full name was Rudolpha, so there was little room for mockery.

Grim rolled his eyes at his Aunt. He thought about calling out to say that it wasn’t him. He was upstairs and it was the back door that had slammed, but he knew what that would get him. She’d think he was being smart. And the result would be three days of washing clothes. By hand.

"And a proper young gentleman doesn’t yell down the stairs!"

Grim groaned, wondering if he would ever please the crotchety old woman. She he’d been Poppa’s nanny once upon an ancient time.

Was she this obnoxious then, or did she get worse with age?

Toby barked at Sam, jarring Grim from his thoughts. Sam was busy with the cogs and gears in front of him and the dog just kept emptying his lungs in loud, echoing woofs. Grim sighed and walked out of the room.

Just some peace. A little quiet.

He looked at the trap door on the ceiling at the end of the hall. It led to the attic. A rope hung down.

Usually it wasn’t in reach. But there it was, almost swaying back and forth, beckoning him.

The dog was still barking, the twins were still dueling, Ellen was calling out for Rudy — something about a missing head, Aunt Patrice was snoring downstairs now — she could fall asleep at the drop of a coin, three of the house clocks were whistling that it was now eleven o’clock, four more were chiming, and Sam was now pounding on something with a little hammer.

It took almost no thought at all.

Grim marched forward and yanked on the rope.