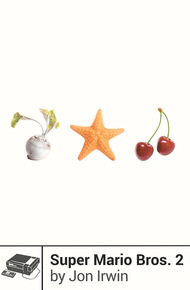 Jon Irwin has published essays in Alimentum, Billboard Magazine, Down East, GamePro, Lumina, and Kill Screen, where he is a contributing writer. In 2009 he received the PEN New England Discovery Award in Nonfiction. He lives near Atlanta but roots for Detroit.

In perhaps the most famous switcheroo in all of game history, the Japanese version of Super Mario Bros. 2 was declared "too hard" by Nintendo of America and replaced with a Mario-ified port of the Famicom hit, Yume Kōjō: Doki Doki Panic. The new game (dubbed Super Mario USA in Japan) was a huge success for its four playable characters, improved graphics, immersive levels, and catchy music, and eventually became the 3rd bestselling game for the NES.

And yet. Because of its strange new villains, its wild gameplay, and its mysterious touches, SMB2 has for years been regarded as the Odd Mario Out, even as it has seen popular updates on the Super NES and Game Boy Advance. Irwin's Mario is not a simple retelling of a 25-year-old story, but instead an examination of the game with fresh eyes: both as a product of its time and as a welcome change from the larger Super Mario franchise. Along the way he searches for clues, pulling up a few vegetables of his own. What he finds is not at all what he expected.

SMB2 was the first non-bundled video game I ever owned. I had no idea about its fraught history, or that it would one day be regarded as the "black sheep" of early Mario games — I just knew I loved it. In this book, I really admire how well Jon juggles the joys & struggles of the playing game itself while pulling back the curtain on how it was made, remade, and marketed in the US. – Gabe Durham

"It may be the most addictive toy in history," begins Hugh Downs, co-host of ABC news program 20/20, in an introduction to a feature called "Nuts for Nintendo," highlighting the growing mania over video games and 1988's big holiday titles. Cut to John Stossel, a bushy mustache keeping his face warm on a blustery New York City sidewalk, waiting in line outside an electronics store. His mission? To buy a copy of Super Mario Bros. 2 for his producer's kid. Nine minutes of interviews with parents and over-the-shoulder video follows, taping kids lying on carpeted living rooms playing Nintendo, their mouths slack. Back in the studio, Barbara Walters asks Stossel a final question: "John, what's your feeling after watching this? Does it make them, you know, braindead?"

Other than the odd mainstream scare story, news and press coverage of games barely existed in the late 80s. Games were sent to stores and put on shelves willy-nilly. Vivid game-boxes appeared at Toys "R" Us or Blockbuster without consumers even knowing how to pronounce some of the titles. Still, through word-of-mouth and blanket advertising, their mindshare grew. And Nintendo ruled.

Back then video games were displayed as plastic cards hung from a wall, each box rendered down into a flat sheet of laminate. On one side was the cover; the opposite side showed the back of the box, screenshots laced with paragraphs about the game's heroes and villains, the struggle of good vs. evil, et cetera—grand annihilations boiled down into pithy copy.

The specifics mattered little. Humans have long been cover-judgers; how was Eve to know that red apple would be anything but succulent and sweet? So, too, did a generation of kids snap up games based on flashy logos or detailed warriors, rich illustration standing in for the game's technical truth: a few chunky blockmen bounding across the same ground colored in six varying hues.

We chose games on gut instinct, pointing at rectangles and crossing our fingers. That you took a slip of paper to a separate counter to actually purchase the game itself should have tipped us off to the transaction being made: This was a lottery. Odds were low you'd win. But we bought those tickets anyway, fingers crossed, eyes gleaming.

And then one day our gaming idol arrived, his mustache rendered in clay.

In the summer of 1988, Nintendo Power #1 arrived on doorsteps across the country. Its own cover announced the impending arrival of something new, something we needed: There was another Super Mario Bros. game coming. All at once, thousands of souls opened this glossy magazine, the same shape as their parents' issues of Time or The Economist, and found what they were looking for.

Games hadn't yet been broadcast in the same pervasive way as other culture. TV ads were fleeting, an occasional shot fired. This magazine, sent out en masse, to be sifted through for thirty days until the next one arrived, was a cluster bomb, a family-friendly blast of nougat-napalm draped over your front stoop. That first issue would eventually be sent to more than 3.2 million homes for free, the highest circulation of any issue for the publication's 24-year history. Soon, Super Mario Bros. 2 was everywhere, even if nobody knew a thing about it.

The issue is a time capsule of an industry that was still finding its balance. The pages are an amalgam of screenshots, cartoons, and top ten lists. Leafing through the magazine today as a thirty-two-year-old invokes little nostalgia—I was a late subscriber and so never received this in the mail—yet the coverage of SMB2 reveals both the confidence and the lack of concern for continuity that Nintendo had in its rejiggered sequel.

At just over 100 pages, Nintendo Power #1 was more the slim and spry Luigi than the stout Mario—subsequent game magazines in the mid-1990s would balloon up to 400 pages long—and Super Mario Bros. 2 occupied almost a fifth of the entire issue. The first twenty pages of coverage introduced the game, explained basics of play and movement, and concluded with level-by-level tips for beating the first two worlds.

But the first image the new Power subscriber saw, the cover, was something else entirely: Mario, posed to mimic the game's box art, in mid-jump with one fist raised and the other around what looks like a carrot, chased by the end boss of the game, a crowned toad named Wart. The two figures traipse over rounded hills, a couple of vegetables stuck in the soil. This tableau was sculpted entirely from clay. An ad agency named Griffes Advertising came up with the idea, plucking inspiration from the then-popular California Raisins, a musical group of anthropomorphic raisins given life through claymation. Mario and Wart wouldn't be singing "I Heard It Through the Grapevine" anytime soon—the cover used a still-photograph of the sculpture, which would live in an empty aquarium in Tilden's office for years after that first issue went out.

"What was really interesting about it was, first of all, creating Mario in 3D," Tilden said. "There was no 3D Mario." Up until this point, the character lived and died as a two-dimensional image. You either saw a collection of pixels generated by lines of code displayed on a monitor, or you saw a flat drawn cartoon in an instruction manual (or the one jotted down in your school notebook). Until that cover was created, Mario had never been given weight, or the simple curvature of something existing in space. It wouldn't be until 1996 that fans could finally play as a three-dimensional plumber in Super Mario 64. This cover image offered a glimpse at the future.

The final pages of Nintendo Power #1 complete the indoctrination. An ad shows three teenage boys with Wonder Years-era Fred Savage hair and a basset hound flying into the shining beacon of a giant television. One holds a facsimile of this very issue as he enters the screen. Block letters in a courageous purple hue spell out the last word: "Welcome to the vast, exciting new world of Nintendo Power magazine." Cue the perforated subscription cards with discount savings off the newsstand price. And in case you'd forgotten, the small print reminds us of all we could have missed: "Just look at the monster review of Super Mario Bros. 2 in the front of this issue! You'll be a master in no time with all those facts, figures, and detailed action moves at your fingertips."

I asked Tilden if Nintendo considered disclosing the origin of Mario's first big-time sequel. "There was no industry publishing at the time," she said, laughing. "I don't even know who we would have talked to about it." Nintendo Power became the first major game-focused publication after the industry's self-induced crumbling. "There wasn't anybody writing anything," Tilden reminded me. "So we could really charter our own path. There was no internet. There was no way for someone else to say, 'Hey, look at this interesting thing Nintendo did.'"

At the time, the word choice—this interesting thing Nintendo did—passed me by unscathed. But in rereading our conversation the phrase sticks in my brain.

Until now, I had assumed the decision, to turn this obscure Japanese game into a Mario sequel, was coated with a thin dust of deception. Nobody in the West knew what Nintendo had done. Eventually the lid would be lifted five years hence, in 1993, when a collection of Mario NES games sold as Super Mario All-Stars for the Super Nintendo included the Japanese SMB2 newly subtitled The Lost Levels. Word spread. A burgeoning World Wide Web allowed those valiant few to connect the dots: Japan's Doki Doki Panic had begotten North America's and Europe's Super Mario Bros. 2. Our game was not, in fact, what it had appeared to be.4

They lied to us was the immediate, melodramatic reaction. But here is the other, more likely reality. They did an interesting thing. This was no yakuza-inspired cover-up. This was the clever manufacturing of something from nothing, an inspired bit of subterfuge.

But consider Nintendo's decision: to reboot a licensed experiment as the next chapter in your tent-pole franchise in the West. What happens if Nintendo's decision fails? If Super Mario Bros. 2 was not on the cover of Nintendo Power, with an instant audience of three million voracious tip-seekers; if the game itself was widely panned as an unworthy successor to the first (an opinion held by some); if the American office didn't convince their Japanese mothership that in order to capture a Western audience they needed something different, something to wow the tube socks off a country of discerning customers already tiring of the last best thing?

For Nintendo fans, the last quarter-century hinges on this game. Yet many dismiss it, shrugging off the oddball world and disparate mechanics as a one-time blip on Mario's peerless catalog. The question remains: What was so interesting about this interesting thing?