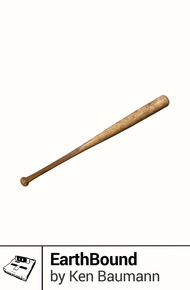 Ken Baumann acted for ten years in feature films and TV. He is the author of the novels Solip and Say, Cut, Map. He lives in Santa Fe, New Mexico, and currently attends St. John's College.

An RPG for the Super NES that flopped when it first arrived in the U.S., EarthBound grew in fan support and critical acclaim over the years, eventually becoming the All-Time Favorite Game of thousands, among them author Ken Baumann.

Featuring a heartfelt foreword from the game's North American localization director, Marcus Lindblom, Baumann's EarthBound is a joyful tornado of history, criticism, and memoir, and the first release in a series featuring classic video games from Boss Fight Books.

Baumann explores the game’s unlikely origins, its brilliant creator, its madcap plot, its marketing failure, its cult rise from the ashes, and its intersections with Japanese and American culture, all the while reflecting back on the author's own journey into the terrifying and hilarious world of adults.

When I had the idea for Boss Fight, Ken was the first person I talked to who really got it. "You gotta do it!" he told me. Soon I had him on the hook to design our book covers and to write our very first book. And what a book! Ken captures the depth, strangeness, humor, and heart of this singular game by imbuing his book with all those same qualities. – Gabe Durham

As you guide Ness through Twoson, you'll pass a bunch of examples of the game's North American localization. These edits are either secular, puritanical, or legalistic—for instance, red crosses were removed from EarthBound's hospitals after Nintendo discovered that the American Red Cross is litigious. Almost all references to religion, sex, murder, death, movies, and brand and band names are absent for English-speaking players. (All of these localization differences have been obsessively compiled by Clyde Mandelin—a staple of the online EarthBound community—at his site Legends of Localization.) One unintentionally awkward substitution: All references to booze were instead changed to coffee, a depressant-to-stimulant swap that often makes NPC behavior seem odd. Not all of the localization efforts were meant to dampen EarthBound, though; Legends of Localization features a table in which names of encounterable enemies in Mother 2 and EarthBound put side-by-side, and the English names are much more evocative (e.g. the Carefree Guy becomes the New Age Retro Hippie).

As Mandelin says, "Game translations almost NEVER got this much careful treatment; just like Square's RPGs from the time, EarthBound was one of the earliest text-heavy console games to be given a truly serious, competent, and enjoyable localization."

"I mean, not many people quote lines from Call of Duty."

Marcus' over-the-phone voice is hearty and authoritative. At certain points in our conversation, I feel like I'm talking to one of the gruff buzzcut guys who always seem to work at NASA in movies about the Apollo missions.

Marcus says, "EarthBound was very much a weird blend of humor and quirkiness, but also it's got this underlying tone of ... you know, teaching lessons, almost. It's got a sort of deep, odd drama to it."

We riff on that for a bit, then I ask him the stumper: "Have you encountered anything since that feels similar to EarthBound? Something that pulls in stuff from so many disparate genres? It can be from any medium ... movies, TV, books."

Marcus brings up O Brother, Where Art Thou?, the Coen brothers movie. I sense its similarities—the goofiness, the self-awareness, the moral lessons and mythological nods, the emphasis on music. But still, EarthBound feels bigger, maybe only because of the wider temporal boundaries that video games provide. Even a movie as large in scope as Cloud Atlas shows the seams of its material limits (I'm thinking of the prosthetic makeup and Tom Hanks's inability to do a convincing, non-offensive accent). Though comparing EarthBound to even a three-hour long movie is unfair because EarthBound takes about twenty hours to play, not considering glitch-exploiting speed runs that take less than three hours. Role-playing games like EarthBound, then, are more temporally akin to long-running television shows, though neither are made without incredibly intricate (and strenuous) budgets.

"EarthBound was one of the hardest games I worked on," Marcus says. "We started around Christmas in ‘94, then worked heavily for three months on the writing. The English build wasn't even playable until March."

"So how'd the writing process work?"

"Well, the other translator I worked with, Masamuki Miyota, took a first pass at the text to just get it into broad-strokes English. And Japanese is a difficult language so it often would need a lot of work. Then I'd go over it and try to make sure the jokes worked, the puns, the references. And if they didn't, I tried to find something culturally similar enough to work for North American audiences. But it all happened really, really fast." Marcus laughs. "It's funny ... there's a text file out there on the internet, I think, of the EarthBound script, including some of its code. Well that's exactly what we had to work with. A lot of times, we couldn't see the line that came before the line that we were translating at the time, or we didn't have access to the original Japanese. We were sort of working in a black box."

This sort of baffles me, so I ask him about three times to confirm that this was truly the case. "So wait: did it seem like you were just translating non sequiturs a lot of the time?"

"Yes. But I hoped, at the time, that the weirdness of the game allowed me the latitude to get away with it." Is the North American version of EarthBound truer to the tone Shigesato Itoi designed because of this black box translating? Marcus admits that the harried, opaque translation process made our version weirder—less profane because of the censorship, but more benignly eccentric.

This tone is exactly the element that stayed with me most as I grew up.