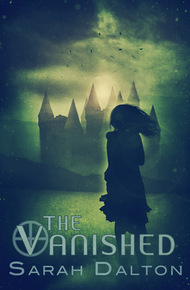 Sarah grew up in the middle of nowhere in the countryside of Derbyshire and as a result has an over-active imagination. She has been an avid reader for most of her life, taking inspiration from the stories she read as a child, and the novels she devoured as an adult.

The Blemished series is Sarah’s first project, however she is currently working on an upcoming YA fantasy series. Keep in touch for more information!

The Vanished by Sarah Dalton

"The Compound bustled with action and anticipation, causing my stomach to do a flip. I stopped in my tracks, realising something, something I hadn't thought of before. We were going to war, and people were going to die."

The Vanished are the forgotten: those who live beyond law or society. Mina fought for freedom. She fought for a better life – a future. But even a free world can decay.

As Mina begins her new life in the Clans she meets people with surprising knowledge about her power, knowledge that could change everything – even her relationship with Daniel. But as she makes new friends, old friends turn against her in shocking betrayal.

Life in the Compound is tough; there are ways and traditions so strange that Mina begins to suspect foul play at the very heart of her new home. Instead of leaving corruption behind in Area 14, Mina is faced with the rotten core of human nature as a Clan warlord threatens to invade the Compound. The Clans are turning against each other and Mina is stuck in the middle.

The Vanished is the second installment in the Blemished series and follows Mina’s story as she continues to challenge those in power and seek out new dangers. With even more rebellion, romance and betrayal, The Vanished promises to take the reader on a roller-coaster ride of adventure and emotion.

The voice, a boy’s voice, jolted me out of my thoughts and I jumped. When I turned around, I saw a scruffy haired, dark-eyed boy with his arms folded across his chest. His nostrils flared. His eyes examined me like I was a puzzle to work out.

"Salt and Rosemary. You’re a very thoughtful girl." He waggled his finger at me and inhaled again. "Ugh. Undertones of fermented chillis. You’re a very angry girl." He wafted his hands under his nose, taking in more deep breaths. "Roses. You’re in love. Cut grass. You’re honest. Pepper. You’re confused––"

"What the hell are you doing?" I snapped.

He folded his arms again and rocked back on his heels in amusement. "You think I’ve never heard that one before?" His eyes narrowed, fixing on me with ferocity. "You never answered my question and since we’ve already established that you are honest I think you should tell me who you are before I summon the gang."

"You have a gang?" I raised an eyebrow. His tone was beginning to annoy me, and I felt my finger twitch in anticipation.

"Phew!" The boy clutched at his nose. "You really do have a temper. Moulding chillis." He shook his head in wonder. "It’s the most disgusting smell, and you reek of it."

Embarrassed, I sniffed my arm-pit, realising that I hadn’t showered in days. The boy erupted into a fit of scornful laughter.

"You can’t smell it, you idiot. Don’t you understand what I’m saying?" He moved towards me. "I. Can. Smell. Your. Emotions."

"If you come even an inch closer to me I’ll throw you across that field." I felt blood rise to my cheeks.

The boy never got a chance to finish before the searing power erupted through my mind and I lifted the boy off the ground, dangling him six feet above the ground. He screamed and shrieked and it was my time to laugh.

I laughed and threw him from side to side like a ball. Using my power had never been this easy. I thought about throwing him across the field, picking out a few painful looking thorn bushes...

"Mina! Put him down this instance."

I gasped and dropped the boy to the ground. I knew that voice. It was the voice I’d heard a thousand, a million times – before bed, at breakfast, in the kitchen, in the garden, on the swings, in the shops... everywhere. It was my dad.