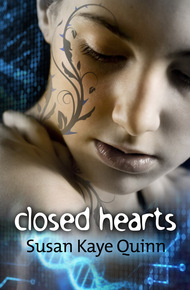 Susan Kaye Quinn is a rocket scientist turned speculative fiction author who now uses her PhD to invent cool stuff in books. Her works range from gritty Future-Noir to philosophical HopePunk, with side trips into royal steampunk romance and middle grade fantasy. Her bestselling novels and short stories have been optioned for Virtual Reality, translated into German and French, and featured in several anthologies.

She writes full-time from Chicago, inventing mind powers and dreaming of the Singularity.

Eight months ago, Kira Moore revealed to the mindreading world that mindjackers like herself were hidden in their midst. Now she wonders if telling the truth was the right choice after all. As wild rumors spread, a powerful anti-jacker politician capitalizes on mindreaders' fears and strips jackers of their rights. While some jackers flee to Jackertown--a slum rife with jackworkers who trade mind control favors for cash--Kira and her family hide from the readers who fear her and jackers who hate her. But when a jacker Clan member makes Kira's boyfriend Raf collapse in her arms, Kira is forced to save the people she loves by facing the thing she fears most: FBI agent Kestrel and his experimental torture chamber for jackers.

The hunched driver wrinkled a frown before I even got on the bus. Her attempt to read my mind would get her nothing but the quiet of the street corner where I stood. I kept my face neutral. Nobody trusted a zero to begin with, but scowling back would only make the driver more suspicious. I gripped my backpack and gym bag tighter and climbed the grime-coated steps. The driver’s mental command whooshed the door closed behind me.

Yeah, junior year was off to a fantastic start already.

Students crammed the bus, which stank of too many bodies baking in the early morning heat. I shuffled past the dead-silent rows, avoiding backpacks and black instrument cases. Two years of being the Invisible Girl had taught me a few things. As long as I didn’t touch an exposed arm or speak out loud, the blank spot of my mind would go unnoticed in the swirling sea of their thoughts. Which was great, until I needed a seat on a crowded bus. With a soft hiss of water exhaust, the bus lurched forward. I grabbed a sticky seatback to keep from falling on three girls deep in mental conversation.

Two senior boys leered from the back row. The whole bus was within range, so they knew there were no thought waves beaming from my head. Yet, instead of ignoring me, they stared like hungry sharks. Last year, looks like those would have gotten them pummeled by my six-foot-two brother, Seamus. But Seamus had graduated, and the protective shadow he cast over me was gone.

Whatever sims the boys were thinking, students four rows ahead of them turned to watch. Shark Boy tipped his head to his friend, obviously discussing me as they stared. His friend’s lips parted to show a sliver of teeth, and he gestured to the only open seat on the bus.

Right in front of them.

I could complain to the driver, but she wouldn’t believe anything a zero told her. Shark Boy’s thoughts wouldn’t carry over the mental chaos of the bus, and speaking out loud would only get me thrown off.

I turned away from the wide grins on the boys’ faces and slowly sank into the seat. My cheeks burned with the expectant stares from the back half of the bus, but I kept my gaze on the suburban houses ambling past the window. The heat of Shark Boy’s hand reached me just before he brushed my bare skin, right below my t-shirt sleeve. I jerked away and clutched my gym bag like it was a shield.

Shark Boy and his friend rocked back with noiseless laughter, as if touching a zero was the height of funny. I shivered in spite of the heat and decided to take my chances with the unfriendly driver. By the time my shaking hands found handholds to the front, we had rounded the corner to the school parking lot. I ignored the driver’s insistent stare. As soon as the bus stopped, I pounded the button on her dash to manually activate the door and scurried out.

Once inside the main entrance of school, a scuffle of feet warned me to step back as a group of girls sailed past, looking all mesh with their band shirts and synced steps. One—Trina—cut too close and knocked shoulders with me. At first it seemed intentional, but then she acted as though I was something she would never touch on purpose. Heat rose in my face.

Harassment from readers shouldn’t get a rise out of me anymore, but I’d fallen out of practice, sticking close to home over the summer. Trina’s snub wouldn’t have hurt at all if her sweater wasn’t still hanging in my closet, a casualty from a time when we traded clothes and secrets. I guess she didn’t miss it.

I dug my schedule out of my backpack. At least the administration hadn’t put me in Changelings 101 again. As if a class on mindreading etiquette and self-control would help a zero like me. An anger management class would be more useful.

My first-period Latin class beckoned from a dozen yards down the hall, its blue plasma lights gleaming like a lighthouse in a hurricane. I narrowly avoided a pair of students air-kissing and skittered to the classroom door.

The new Latin teacher tried to be mesh with his shiny nove-fiber shirt. A circle of admiring students laughed silently at some mental joke. Seamus had warned me that I would need a hearing aid this year so the teachers could whisper their lectures to me while instructing everyone else via mindtalk. I had put it off, waiting for my brain to finally flip a switch and become normal, and hoping to get by in my classes until then. Meanwhile, to the teacher and his fans, I might as well be a dusty trashcan in the corner. I found a spot in the back, and a knot of certainty tied tight inside me.

My chair gained gravity and sank me deep into my seat.