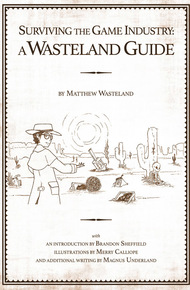 Matthew Wasteland was a nom de plume for Matthew S. Burns—a game developer, writer, and composer who lives in the Seattle area. Over the last fifteen years, he has worked on large-scale franchises such as Halo, Destiny, and Call of Duty, on a variety of educational and scientific discovery games, and as an indie developer.

From 2008 to 2013, the back-page column in Game Developer magazine was home to a humor column called Arrested Development. Biting, mordant, and entirely too true, its pseudonymous author lampooned all aspects of the game development life, from frustrating tools to clueless publishers to incompetent management. But more than being a dark satire of the industry's problems, the columns also cover an important period of the industry's history as businesses to struggled to navigate rapidly changing market conditions and adapt to the rise of casual and mobile games. Includes introductions by the author and Game Developer magazine editor Brandon Sheffield.

"This hilarious compilation of satirical Game Developer magazine columns - by the AAA game industry veteran & co-author of acclaimed 'The Writer Will Do Something' - has a unique insider view into the function and dysfunction that made the console game biz tick." – Simon Carless

I'm going to make it big in indie games. Yeah, I know everyone says that, but I've got a plan—a plan honed by many late nights of careful thinking about why some indie devs make it big while others fall by the wayside. I finally worked it all together into this detailed roadmap, which I'm going to share with you now:

First, I'll make a Twitter account for myself and follow a bunch of famous people in games, mostly whoever the site suggests. These people will notice that I followed them and follow me back—and then they'll read about me and my game! I'll do this until I have, say, maybe 100,000 followers or so, which I think is a decent number to start getting some real influence. I'll also make a lot of funny jokes on the account, since people seem to like those. Once I'm accepted and celebrated by gaming's ingroup, the rest will be easy!

Add Game Journalists to My Entourage

Then I'll email a bunch of "tip" addresses at major publications about the project. They'll write back immediately since they're my Twitter pals. My game is the coolest idea they've ever seen, they'll say (the British gaming journos will say "brilliant!"), and I'll work with them to post a whole series of articles about the game. Particularly, they'll want to know how I came up with the idea, and how mind-blowing the game is going to be when it comes out. The cool ones will want to be friends with me, and then we'll hang out at E3 and Tokyo Game Show. Of course, then I'll Tweet about that too—gotta feed that hype cycle!

At that point I should probably actually start making the game, so I'll need to get some money to hire the team to work on it while I continue to dedicate my full-time efforts to my internet personality. Publishers will probably start contacting me at this point, falling all over themselves to fund my game, but I'll turn them all down. Activision? Ha ha. EA? No way. Bethesda? Beat it! Why give those fat cats a piece of what I'm making when I can put the numerous fans I'll have right there in the driver's seat with me? That's right, I'll be launching a Kickstarter!

I've read quite a few Medium posts about what goes into a successful crowdfunding project so I have it pretty well down at this point. I'll get a high-impact video made with some pre-renders, concept art, and some killer music. For the part where I have to talk to the camera, I'll just be my jokey and cool usual self! By then I'll have honed my personal brand through a series of hilarious podcasts and livestreams where I'm funny and talk about games. Each of those will probably garner a decent number of subscribes, maybe like a million or something. Since I'll be basically extremely famous by this point, with a lot of famous friends, I am sure the campaign will easily top whatever the funding amount ends up being.

Win Lots of Contests and Festivals

It won't hurt to rack up a passel of awards, too. Once the game is ready to play (maybe a couple months or so after I hire the team) I'll enter it in the IGF, IndieCade, Games for Change, and all the other competitions that exist for games. Truth be told, I don't always think the artsy-fartsy stuff in those shows is much to write home about. Putting my game in for consideration will kind of show them up because it'll be so obviously better than all of the other games there. Oops! That's a little embarrassing!

But I'll be gracious about it when I accept the prizes. I'll thank the judges and look the audience in the eye and say: Hey, you too can be like me—you just gotta try!

Unlike a lot of other game developers, I know how to handle the online world. As long as I'm nice to my fans, they'll be nice back! I'll have a subreddit too and that'll be a calm, rational place for everyone to share their anticipation for the game with insightful posts and reasoned discussion.

I'll make sure to attend lots of conventions, and I'll give away lots of swag because I love the community so much. When you give people stuff, guess what? They automatically love you back! I can just picture the long lines of people waiting to get a chance to play my game and maybe even meet me in person and get my autograph. That is, if I decide to make a public appearance at all. I might get tired of all the constant attention and go "incognito," as they say—posing as just another fan of my awesome game. Then, if I overhear someone badmouthing me, I could dramatically reveal I'm actually right there, shocking them and making them realize the error of their ways! "Forgive us!" they'll shout. Man, that'll be so sweet when that happens.

Anyway, after that, I'll probably take a break for a bit and let others just sort of bask in the warm glow of my success. I'm very generous by nature and I'm always happy to be the example of what to do, so when the prizewinning film crew contacts me to inquire about making a documentary of my life, I'll participate in a totally earnest and sincere way. I'm not completely sure exactly how I'll enjoy all of that money just yet—I doubt I'd buy an opulent mansion in Hollywood or anything gauche like that. Maybe I'd consider an old castle in Scotland, though.