THE GLITTER AND HOPE BUNDLE 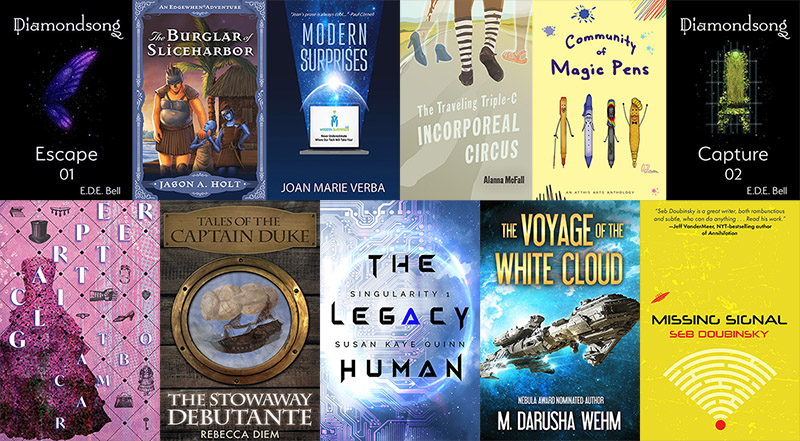 The Glitter and Hope Bundle - Curated by Cat Rambo

I think I speak for all of us when I say that 2020 has not gone exactly how I expected it to, and this StoryBundle has been no exception. I originally conceived of it as a hopepunk centered bundle, but as I sorted through possibilities, I found less punk than plenty of hopeful stories that reminded me that hope comes in all sorts of forms, not all of them as in your face as hopepunk.

Hope can find its origin in friendship, whether on an alien planet or a New York street corner. It can come from writing, in a myriad shades as multi-colored as the ink in which it's inscribed. It glitters at the bottom of Pandora's box, waiting to escape. Waiting to provide comfort and lightand renewed vigor for the fight.

So this is a bundle centered on hope with a touch of glitter, rather than grit, and I hope you enjoy reading these stories as much as I did. It's a range of flavors as well as forms: novels, including some beginnings; connected short stories; sequential novellas; and an anthology of stories connected by theme. – Cat Rambo

E.D.E. Bell's Diamondsong is the entrance into a ten book series. I love the thoughtful world that Bell has constructed and her world has not just hope, but an innate kindness and gentleness to it that shimmers underneath the surface. It's also a book that deals with gender, exploring it in a way that is careful, considered, and nuanced.

The Magic Pens anthology is from Atthis Arts, and edited by Bell. Writers love pens of all kinds, because we know they help us write the sorts of stories that can change the world. This anthology presents a wide-ranging group of authors.

Susan Kaye Quinn's The Legacy is full of philosophical hope as it looks at a world that distinguishes between the ascenders, who have been enhanced by science, and those who are legacies, whose existence is that they are untouched by that same tech. This is the first of a four voume series; the next volume is The Duality Bridge.

Jason A. Holt's The Burglar of Sliceharbor reminds us that sometimes we need a touch of escapism with our hope, a chance to wander in Edgewhen, a world of giants, waterfolk, and other fantastic reflections of humanity.

Joan Marie Verba's Modern Surprises is science fantasy, glittering with technology and magic in equal parts. It features light hearted fun while providing a cast of strong female characters working in STEM — and doing so as a team, rather than as adversaries or rivals. Cooperation and adventure can go hand in hand, it turns out.

Darusha Wehm - The Voyage of the White Cloud is a colony ship story that focuses on the ordinary people that make it up rather than those in command. It's told in the form of connected short stories that explore ethical and philosophical considerations of life spent in unending journey.

Alanna McFall - The Traveling Triple-C Incorporeal Circus is another favorite of mine, a re-imagining of Peter Beagle's A Fine and Private Place that takes it on the road, while making it a story of female friendship, and the hope that springs up from it.

Rebecca Diem's Tales of the Captain Duke also swims in science fantasy, with a steampunk flavor and a feisty heroine, Clara, who becomes a member of an airship pirate crew. Told in a series of four novellas, Diem's book sails through high adventure, propelled by characters who hope to change their world.

Seb Doubiensky's book is set in a dystopian future, but even there, hope lurks behind the words. When the protagonist Terrence Kovacs has become mired hopelessly in falsity as part of his work for the New Petersburg Counter-Intel Department, how can he know whether or not the hope of liberation being extended to him is true — or just another lie? Sometimes hope involves trust and a willingness to leap without looking.

I'm also including my own book, Carpe Glitter, which recently won a Nebula Award for Novelette, because it talks about the hope for breaking free of toxic family patterns and the problematic legacies of our families. Its protagonist has been told to seize the glitter — but what happens when you never let go of it?

If you pay at least the bonus price of just $15, you get all four of the regular books, plus seven more more books, for a total of eleven!