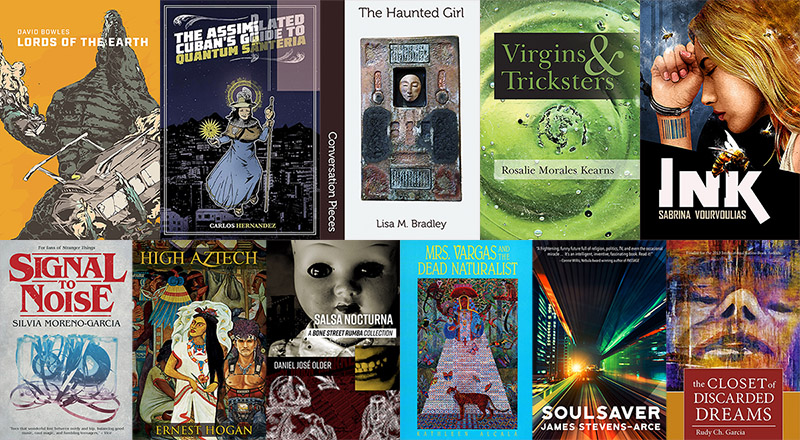 This means finding speculative fiction is trickier and more complex in this part of the world. It also means that Latinx authors may derive their SFF canon from a very different well than their Anglo counterparts. While science fiction and fantasy are normally associated with Tolkien or Asimov, a Latinx writer might be more inclined to think of Isabel Allende or Julio Cortázar. At the same time, it is not unusual for Latinx authors to have also been exposed to Anglo pop culture, fantasy and science fiction. Finally, since Latin America is a large region, the history, culture and folklore of Latinx writers may be radically different from one another.

The result is a wild, eclectic field of the fantastic, which is reflected by the selections in this bundle. On the one hand we have collections with one foot firmly rooted in magic realists soils (Virgins and Tricksters, Mrs. Vargas and the Dead Naturalist and The Assimilated Cuban's Guide to Quantum) and on the other we have books that have a pulp edge (Lords of the Earth, High Aztech), novels that are virtually unclassifiable (The Closet of Discarded Dreams and Soulsaver), and works that seem to be more easily identified as urban fantasy (Salsa Nocturna and Signal to Noise).

The presence of Latinx writers is still rather scarce in commercial publishing, hence the vast majority of these books are published by small and independent presses. You may not know many of them. Nevertheless, some Latinx writers have been recently receiving more attention, particularly in the Middle Grade and YA genres. Daniel José Older (Salsa Nocturna) has found much success with his Shadowshaper series and has penned a Star Wars novel, and David Bowles (Lords of the Earth) won a Pura Belpré Honor for his Garza Twins Series. Meanwhile, Carlos Hernandez(The Assimilated Cuban's Guide to Quantum Santeria) will be publishing Sal and Gabi Break the Universe this spring through the imprint Rick Riordan Presents.

The openness of Middle Grade and YA editors to more diverse authors means many up and coming Latinx authors cluster in that arena, but there are some writers who continue to work in adult categories. Thus, Lisa M. Bradley (The Haunted Girl) is making her debut as a novelist this summer with the publication of Exile, which has been dubbed a kind of post-apocalyptic Mad Max adventure with a Latina lead.

For myself, I am a writer of standalone adult novels, with three books under my belt. Signal to Noise, my debut which is included in this bundle, was a finalist for the British Fantasy, Locus, Sunburst and Aurora awards. It won a Copper Cylinder Award in Canada. My writing veers wildly from novel to novel. I've written a Mexican vampire novel, a novel of manners with telekinesis, a near-future sci fi novella, and this year will see the publication of Gods of Jade and Shadow, which combines Mayan mythology with the 1920s Jazz Age.

In the end, the general impression you might get when reading this bundle is that Latinx writers are incredibly different, that they enjoy coloring between the lines, and that you never quite know what you'll get when picking one of their books.

I hope you enjoy all of our stories.

If you pay at least the bonus price of just $15, you get all four of the regular books, plus SEVEN more!