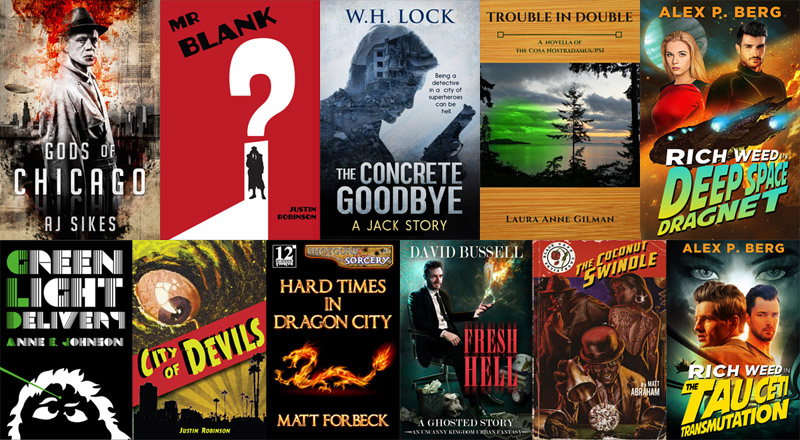 The Neo-Noir Bundle serves up, in one fell swoop and at rock-bottom price, a collection of ten riveting works that blur boundaries, mix up expectations, and blend together all the best that noir has to offer.

As the founder and once-mastermind of acclaimed small indie press Candlemark & Gleam (now helmed by fellow renaissance woman Athena Andreadis), I had the honor of helping release some of the best new works in the neo-noir resurgence; these days, I'm digging into the best vintage pulp and noir with The Fiction League podcast.

And now, I get to share that dark, brooding twist on speculative fiction with you in this spectacular bundle.

You'll get shadowy settings, the electric hum of eroticism, bouts of spectacular violence, and lose-lose scenarios familiar to devotees of Dashiell Hammett, Raymond Chandler, James Ellroy, and Patricia Highsmith; of Blade Runner, Strange Days, and the dark Batman reboots. Add a dash of snark, a jigger of suspense, and garnish with a twist of epic proportions for a neo-noir cocktail that'll leave you reeling…and thirsty for more.

Mr Blank by Justin Robinson, the starting point of the Fill in the Blank adventures, is a conspiracy buff's dream—The X-Files on LSD-laced steroids. Our narrator, a low-level flunky who likes it that way, has his finger in every secret society's pie and can handle them all with aplomb, from Illuminati to chupacabras. But when he's targeted by assassins while his heart is also getting targeted by (maybe) the love of his life, it's hard to keep his head above water—let alone on his shoulders.

"Trouble in Double" by award-winning author Laura Anne Gilman, a novella set in her fan-favorite Cosa Nostradamus/Sylvan Investigations series, answers the question of who polices the powerful—a group of forensic mages who don't run from trouble, but track it down and make it wish it was never born. With that kind of a reputation, it can be hard for a guy to get some downtime…as former paranormal investigator Pietr Cholis finds out when hidden power and dangerously attractive new acquaintances with tangled pasts threaten to disrupt his hard-earned, peaceful retirement on a bucolic island.

Gods of Chicago by Aaron Sikes is hard-bitten alt-history dieselpunk (with Gods of New Orleans as its younger sibling). Set in the 1929 Chicago of Al Capone and opening with the Valentine's Day Massacre, it's the saga of hard-drinking, hard-hitting newshawk Mitchell Brand and amazon flapper Emma Farnsworth. When you believe in right and wrong in a city that only sees shades of dirty grey, it's hard not to stop turning over rocks and exposing the slime underneath them—despite warnings (and worse) by friends and enemies, human and otherwise…and despite invisible deities pulling deadly levers.

The Concrete Goodbye by W.H. Lock, the standalone fourth work about PI Jack Story, is set in a Gotham-like city where superheroes can be made—or broken—by talent spotters and media franchises. Story's superpower is a sort of immortality—he can take a lot of punishment, but it leaves a certain kind of mark. In The Concrete Goodbye, he'll need all his doggedness: a retired superhero is being blackmailed by sex tapes of his up-and-coming superhero granddaughter; a bomb claims the life of another aspiring white cape; and a super-talent impresario and a powerful gangster stand ready to pulverize Story at the slightest misstep.

City of Devils by Justin Robinson, the springboard of the City of Devils series (followed by Fifty Feet of Trouble and Wolfman Confidential), is an inspired noir/pulp monster mash: when the Night War turns humans into a highlight reel of B-movie monsters, Nick Moss finds himself the only human PI left in 1950s LA. In City of Devils, Nick is on the trail of a missing city councilor. With monsters trying to turn him—or kill him—he has the devilish task of watching his back while trying to find his man (well, mummy).

Green Light Delivery by Anne E. Johnson is the first in the Webrid Chronicles (currently a trilogy consisting of Green Light, Blue Diamond, and Red Spawn Delivery), a series that can best be described as what would happen if a Wookie with a drinking problem turned up in The Fifth Element. Ganpril Webrid, living in the Raralt Planetary Circle, wants nothing more than to have a comfy life of booze and babes. But thanks to a family legacy of carting stuff for delivery, he finds himself living a life packed with far more adventure than he ever wanted. In Green Light Delivery, Webrid has to deliver a laser device…that happens to be embedded in his skull. And the (many) folks who want it aren't too picky about what happens to the host.

Hard Times in Dragon City by Matt Forbeck is the first installment of his three-volume Shotguns and Sorcery series, a Chandler-meets-Tolkien universe with a soupçon of team quest RPG (not surprising, given that the author is also a multi-award-winning game designer). Adventurer Max Gibson has retired to enjoy his hard-won earnings. Yet trouble still finds him and his treasure-hunting friends—drawn from all the races that make Dragon City their class-tiered, undead-beleaguered home under the fiery gaze and iron rule of the Dragon Emperor. In Hard Times in Dragon City, someone is bent on murdering Max's friends…and he reluctantly rejoins the fray to figure out who and why.

The Coconut Swindle by Matt Abraham, second in his award-winning Black Cape Cases series, seamlessly mixes Mickey Spillane with golden-age superheroes. Dane Curse, a supervillain turned gumshoe, is facing his first case—the ol' "locked room" murder puzzle. But when you're dealing with superpowers, nothing is ever that easy. The trail leads to an old enemy with grudges, a killer who specializes in assassinating supervillains, a wealthy socialite with a murky motive…and, inexplicably surfacing from years in hiding, Dane's estranged wife and daughter.

Deep Space Dragnet by Alex P. Berg, the second of three Rich Weed adventures, is space opera written by Elmore Leonard. Rich Weed, sleuthing on Tau Ceti E with a droid sidekick and a sharp-tongued AI brain implant, prefers cases in gravity wells. But when starships owned by a giant interstellar transport corporation are hit by untraceable space pirates, the fee is too good to pass up. And to add to his space vertigo, Rich must join forces with a Han-Soloesque bounty hunter and an alien physicist with a very literal sense of English.

Fresh Hell by David Bussell, the start of the Ghosted portion of the Uncanny Kingdom multi-series universe, peers through the eyes of an exorcist who ironically finds himself among the ghost population. Equal parts Hellblazer's Constantine and soul escort, Jake Fletcher (a murder victim who uses bodies like "sleeves" à la Takeshi Kovacs of Richard Morgan's Altered Carbon) must help unquiet spirits find their way to the final resting place. In Fresh Hell, he has a particularly gruesome case on his hands: the illegal summoning of a demon that would give the Alien/s xenomorph a run for its money.

Like its ancestor, neo-noir is constantly changing, keeping characters (and readers!) off-balance in the best possible way. This bundle gives you a chance not only to experience the darker side of modern speculative fiction, but entry into several spectacular series.

Cue the moody jazz, get the bar-bot to mix you a dirty martini, and prepare your wits to do battle with the ordinary. The Neo-Noir Bundle has a long burn—I hope you enjoy it! And stay tuned for more StoryBundles curated by Candlemark editors!

The initial titles in the The Neo-Noir Bundle (minimum $5 to purchase) are: