THE SORCERY AND STEAM BUNDLE 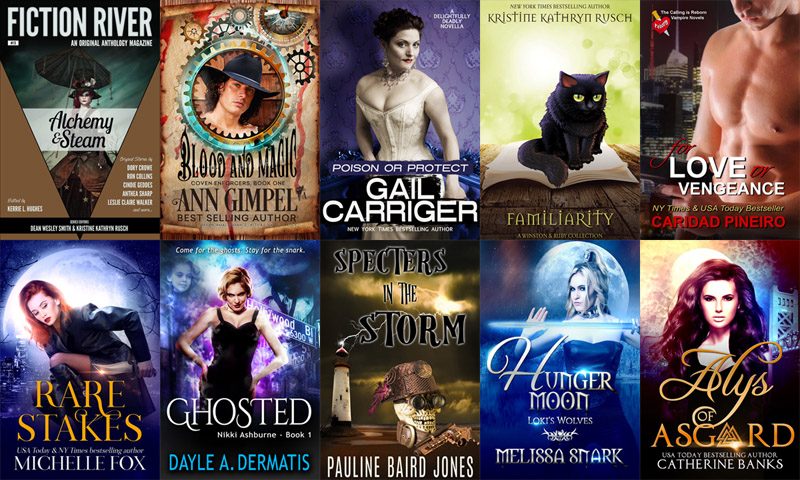 The Sorcery and Steam Bundle - Curated by Kristine Kathryn Rusch

We have everything in this bundle that a fantasy reader could want.

We have magic in all forms, from the magic that gods use when they come to Earth to magic that a familiar inspires when she helps a man with limited ability keep his spells fresh. We have vampires and werewolves. We have parasols and tea and lovely chocolates. We have FBI agents facing killers and assassins who can kill with a blink.

A fantastic story for every mood, and steampunk. Not enough to call this a steampunk bundle, but enough that we could add "steam" to our subtitle. (We can also add "steam" for another reason. One or two of these books have steamy scenes, that have nothing to do with engines and everything to do with heat between humans.)

We also have new releases in this bundle. Usually writers contribute the first books in a series or a book that fits the theme but has been published for a long time. Four writers—Dayle A. Dermatis, Catherine Banks, Michelle Fox, and me— decided to put their most recent book in the bundle. In fact, Catherine and Michelle have contributed books exclusive to StoryBundle. You can't get those books anywhere else.

Pauline Baird Jones started our steampunk trend by asking me if she could include her wonderful Specters in the Storm book. Of course I said yes. That yes opened the door to Fiction River: Alchemy & Steam, the anthology series' popular steampunk volume.

It also enabled me to add Gail Carriger, known for her steampunk novels. She contributes a book in Delightfully Deadly series. And hers isn't the only series. We also have Ann Gimpel's Coven Enforcers, Caridad Pineiro's twelve-book Calling/Reborn books, and Melissa Snark's six-book Ragnarök books (started before the movie, I'll have you know).

We have magic without steam, as well. Dayle A. Dermatis's Nikki Ashburne died, then got revived with an added skill—the ability to see ghosts. Both Catherine Banks and Melissa Snark have added mythic gods and goddesses into their fictional stew. I'm the one who provided the cat, although Ruby, a familiar, would argue with me for that sentence. She's more than a cat. She's something special.

I hadn't planned to put together a women-only StoryBundle, but I had.

I just asked writers whom I'd worked with before, and who impressed me in one way or another. After the invitations went out, after the acceptances came in, and as I put together the letter to inform everyone who their partners in bundling would be, I realized that every name I typed was female.

Which is just about perfect, considering that March is Women's History Month.

We're kind of messing with history, considering how much magic and steampunk we've thrown into the mix (and how some of our stories have no history at all). But we're reaching for the spirit of the celebration, not the celebration itself.

In addition to the history and the magic and the steam, we also have a charity to promote.

This bundle's charity is AbleGamers. In the past twenty years or so, the online gaming world has become a major place for people all over the world to interact with each other. AbleGamers makes it possible for people with disabilities to participate, by providing everything from equipment personalized for each person's needs to advice to the game developers on how to make their entertainment accessible.

Entertainment takes our mind off the troubles in the world. You can entertain yourself with this bundle, and pay for someone else's entertainment in the online gaming world. Or you can buy the bundle as a gift, allowing a friend to read some of your favorite authors. As you pick up a copy of this bundle, please consider throwing in a few dollars to help AbleGamers.

The initial titles in the Sorcery and Steam Bundle (minimum $5 to purchase) are: