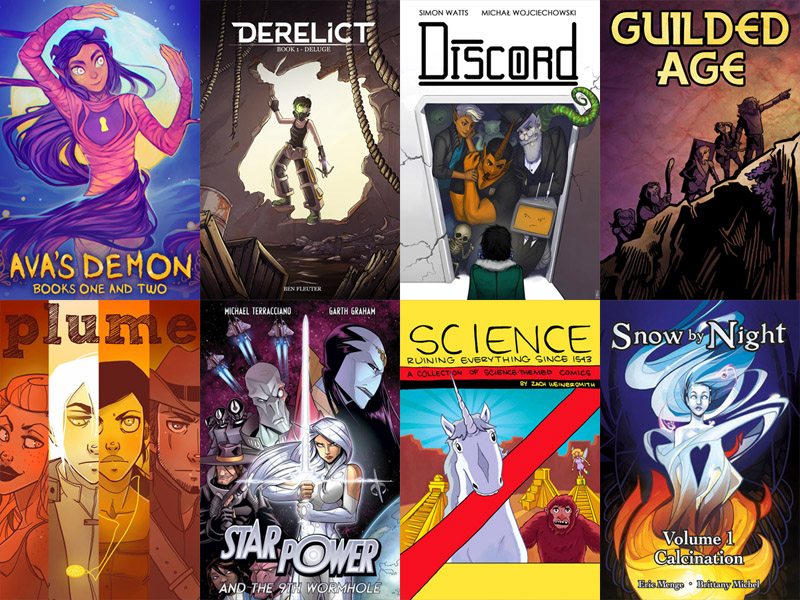 My name is Simon Watts and it's my honor to curate the first ever Webcomic Community Storybundle. Since I was a child, I've always been fascinated by comics. I loved the art, the adventure, but most of all, I loved the spaces between the panels that my imagination filled in. At first I was interested in mainstream comics. Industry titans like Alan Moore and Neil Gaiman were the ones who first showed me what the medium was capable of. As time went on, I discovered Image Comics and was thrilled by their wealth of creator owned ideas. I wasn't exposed to webcomics until my early adulthood, when a friend suggested that I read Homestuck. What I discovered was that a new frontier of unique creators had emerged online.

It took over a year, but I'm thrilled to announce that the Webcomic Community Bundle has finally launched. The Bundle features eight of the finest creators in the industry. Our first title is Snow by Night, which tells the tale of a winter spirit's quest to find her heart in a colonial fantasy world, wonderfully brought to life by Writer Eric Menge and Artist Brittany Michel. Eric's knowledge and love of American history and myth is etched into every page of this meticulously researched comic. Bleak, atmospheric, haunting, magical, unforgiving and mysterious are all words that describe Ben Fleuter's Derelict, in which a resourceful heroine desperately fights for survival in an apocalyptic drowned world. Between the 13 Dimensions exists Discord, the interdimensional library in which all cultures mingle. A whirlwind of colorful characters carry Discord's epic first volume. Worlds collide, or rather battle, in Writer Simon Watts (that's me) and Artist Michal Wojciechowski's fantasy/sci-fi adventure. Written by duo Phil Khan and T. Campbell, and drawn by John Waltrip, Guilded Age is a humorous take on the High Fantasy genre. In this exciting dramady a political conflict lurks in the shadows and threatens to tear Arkerra apart.

A young girl is forced to face her demons, literally and figuratively, in Ava's Demon. Every panel of both volumes feels like a lovingly crafted snapshot from gorgeous animation. Artist/Writer Michelle Czajkowski flawlessly blends humor and danger into a story filled with intriguing and mysterious characters. Danica Maris is chosen to wield the incredible Star Power, forcing her to become a space faring superheroine who stands against the dangers of the 9th Wormhole. Michael Terracciano and Garth Graham's Star Power is a beautifully illustrated and exciting comic that feels incredibly fresh in a medium dominated by superheroes. Explore the weird west in K Lynn Smith's Plume. Vesper Grey and her handsome guardian Corrick seek vengeance and magical artifacts, only to find way more than they bargained for. Witty, action packed, and even a little bit sexy, Plume is a one of a kind and impossibly stylish revenge tale. Finally we have Science: Ruining Everything Since 1543, a hilarious and thoughtful collection of comics from Zach Weinersmith of Saturday Morning Breakfast Cereal fame. A must read for any science fan.

And speaking of science, a portion of the profits will go to the Karen Beasley Sea Turtle Hospital in Surf City North Carolina. As our climate changes, more and more sea turtles are washing up on beaches from something called cold shock. Cold shocked sea turtles suffer from a variety of health problems which is where our charity comes in. The hospital plays a crucial role in rehabilitating these beautiful animals. You can donate up to ten percent of your purchase to the Sea Turtle hospital. All of our creators are from different backgrounds, but they're all simultaneously united by a relentless drive to create, and a refusal to let anyone or anything hinder the pursuit of their dreams. These eight titles are a must have for any indie comic fans.

The initial titles in the Webcomic Community Bundle (minimum $5 to purchase) are:

If you pay at least the bonus price of just $15, you get all three of the regular titles, plus five more!