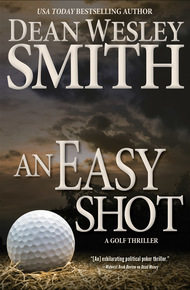 Seattle detectives Craig and Bonnie Frakes want nothing more than to enjoy each other's company and their golf vacation in Scottsdale. They need the rest.

But their vacation plans take a sudden turn when they overhear a conversation between two men plotting a murder—the murder of someone very powerful.

Outside their jurisdiction and unsure whom to trust, the Frakes must plan each move of their investigation carefully—or risk multiple lives, including their own.

Dean has been talking about his golf pro thrillers for almost as long as I've known him, and that's a long time. Dean was himself a golf pro before he became a writer, and he uses that inside experience to bring vivid details to his setting. (He was also a professional poker player, but that's an entirely different series of stories.) – Kevin J. Anderson

CHARLES ROBINS IGNORED the crisp desert air and the star-filled Arizona night as he stepped onto the stone patio of his Scottsdale mansion. His entire focus was on the dark-suited man who leaned against a rock wall, smoking.

Beyond the wall, the lights of Phoenix stretched out across the valley floor. Often, on spring nights like this, Charles would have his after-dinner brandy served on this patio. He loved the view, the lights, the feeling of being above all the masses below.

At the moment there was much more important business to attend to. There would always be other warm nights and brandy on the patio.

The man dropped the red-tipped cigarette and ground it under his foot as Charles closed the patio door and turned.

The man would fit into most crowds. His dark suit wasn't expensive, but it wasn't cheap either. His face was clean shaven and had nothing really distinctive about it. His hair was short and he was going slightly bald. Charles doubted he would even recognize the man if they passed on the street. Yet the man was one of Charles's most trusted and valued employees.

The man waited, making Charles come to him. No one else could do that. Charles controlled businesses worth a billion dollars, had twenty servants and six body guards in this house alone, and was considered one of the most eligible bachelors in the country. Yet this man just didn't seem to care.

Charles asked him to do special tasks, paid him well, and that was all the man did. He scared Charles by his very coldness. No one else in this world did that to Charles.

In the three years the man had worked for Charles, this was only their fourth meeting. All four meetings had been on this patio, and always alone. Charles didn't even know the man's real name and had no desire to learn it. Charles just called him Bill when he had to call him anything at all, and the man didn't seem to care. Yet Charles knew to the penny how many hundreds of thousands of dollars this man, under a false company name, had been paid for "consulting."

And every penny had been worth it.

The man spoke little, and Charles liked that about him. Tonight there were no greetings. The man, his dark eyes hidden in the faint light, simply stood and waited, his hands behind his back, as if he were in control.

That attitude made Charles feel even less sure about what he was about to do, but at this point he could see no other choice.

"Senator Knight from California will be playing in a pro-am golf tournament here in Scottsdale this weekend," Charles said, keeping his voice low so that it wouldn't carry in the desert air. "Then he will be flying to Washington for a vote Monday morning."

The man said nothing.

Charles went on. "I want you to make sure he doesn't make that trip."

"Never make the trip?" the man asked, his voice very low and deep. "Or delayed?"

"I don't honestly care," Charles said. And he didn't. Senator Kelly had been after him for years. Having the man permanently out of the picture would not be a bad thing. But it was critical Kelly didn't make that vote.

"Understood," the man said, nodding once. "Is that all?"

"Make it look like an accident if you can," Charles said. "But if you can't just make sure it's done. He cannot be allowed to be in Washington on Monday. Understood?"

Again the man nodded once. "This is a United States Senator you are talking about. It will cost you more."

Without even a nod the man turned and started down the rock path beside the garage wall. The night seemed to swallow him. One moment there, the next gone. How the man got past Grant and his men, and in and out of the estate's security system was another question Charles just didn't want to know the answer to.

Charles stared after the man for a moment, feeling uncertain, and very worried, just as he had felt every other time he had talked to him. Yet the man always got the task done.

Charles turned to look out over the lights of the valley below. This mansion, all his property, everything he owned and controlled, was being threatened and he couldn't let that happen. Senator Kelly was the push behind legislation that would cripple two of Charles's main companies, and lead to investigations that Charles knew he couldn't withstand. If Senator Kelly's legislation passed, Charles would be broke and fighting to stay out of jail in less than a year.

Most of his waking hours—and many of his nightmares—over the last few months had been to fight this bill. He had wrapped up enough votes in Kelly's committee to tie and kill the bill if Kelly didn't vote. But Chairman Kelly's vote would put the bill on the floor of the Senate and from there it couldn't be stopped.

The key to it all was making sure Senator Kelly didn't make that vote.

Charles glanced down the dark path where the man he called Bill had disappeared. He could see nothing.

With a deep breath of the fresh, crisp night air, Charles turned and headed back inside. He had a lot of work to do and work was always the best thing to take his mind off of what he had just ordered done.

If that was even possible.