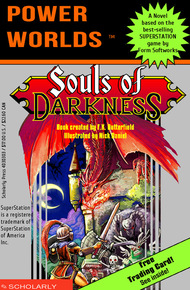 Gary Butterfield is a musician, author, podcaster, and games critic living in Portland, Oregon. He's the co-host of several shows on the popular Duckfeed.tv Podcast Network, including Bonfireside Chat and Watch Out For Fireballs!

Souls of Darkness by Gary Butterfield

Souls of Darkness is a Dark Souls parody book based on the classic Worlds of Power line of children's books. it takes the basic framework of the series (young child gets sucked into their favorite video game) and applies it to a fictional NES style game, Souls of Darkness. Souls of Darkness is, in turn, based on Dark Souls, but reworked as if it were a Nintendo game. Yes, it's confusing.

Really, all you need to know is that it's a rollicking adventure tale, full of affectionate goofs on classic NES games, overtly commercial adver-lit for children, and most of all, Dark Souls. It's filled with references and in-jokes to the passionate Souls community while simultaneously holding up as a funny adventure yarn.

Follow Maya Hunter as she quests for the four Soul Orbs she needs to rescue her sister and confront The Callow King, deep within the Silver City. Catch the Power, Today!

"Why is it called The Forgotten Tomb?," asked Lounging Carl. "Everybody knows about it. Hell, you could see it from my window at The Wretched Refuge."

Maya knew. The Marrowlord named her abode The Forgotten Tomb because in Koledran, true death was a rare and special thing. The Curse brought people back to life and those few who were not cursed were granted immortality by the Soul Orbs. To die, thought the Marrowlord, was to truly forget and this tomb was a tribute to that idea.

She kept her mouth shut, however, because she was in a hurry. At this point, her sister had been missing for a while and who knows what The Callow King was doing to her? Nothing like this had ever happened in the game. Each time she booted up Souls of Darkness was the same. She would make her way through Koledran and gather the various keys and Soul Orbs necessary to open the passage to The Cosmic Campfire. The actual encounter with The Callow King was an intentional anticlimax, a rare thing on the SuperStation. Other SuperStation games had endings where you shot Hitler in the face with a rocket or defeated Satan by jumping on his claws to reach his face. Not so with Souls of Darkness. Souls of Darkness ended with a trivial encounter with an old man, barely hanging onto the past. It was something she loved about the game.

In the game, The Callow King never got what he wanted. He was simply waiting out his years in a dying world, and his lords, huddled around the Soul Orbs, merely waited for some chosen one to come slay them. This was different. The Callow King had a plan and none of Maya's experience prepared her for it. Koledran was a place of fear again. In some ways, that was welcome. She had mastered it on the SuperStation. Now, it felt fresh.

The entrance to the Forgotten Tomb was even more grim in real life than it was in the game. It was carved into the base of a rocky mound, surrounded by an endless graveyard. Tombs, sepulchers, mausoleums, undercrofts, graves, marker stones, crosses, shallow graves, and unadorned caskets (some with locks, some without) for miles. The actual door consisted of two mammoth stone slabs lined with skulls. The door was shut and looked too heavy for any of them to move.

Maya approached a locked casket. "Sir Lunarious, do you know why these caskets are locked?"

"I hazard the groundskeepers just thought it looked cool," said Lunarious, pointing a gauntlet clad hand at a few skeleton workers. The skeletons were cheerful, carefully arranging dried roses on a statue of a headless angel. Maya couldn't hear them from where she was but they looked to be telling one another skeleton jokes and singing skeleton songs.

Lunarious leaned over to slowly cut off one of Lounging Carl's fingers. "Quiet now. We have more pressing things to worry about. How are we going to get into this tomb?"

"Well, ordinarily we'd want to have the Huntsman's Key by this point," said Maya. "But I'm not sure we have the time to go all the way to the other side of the world to get it." They were skipping a large portion of the game world in the interest of time. Maya had seen crazy times in PowerStation Magazine from the likes of Wolf Jr and Super Goose. They completed the game in less than an hour so she knew it had to be possible... but how?

Speedrunners used glitches to clip their avatars through walls or jump at strange angles to reach areas well out of sequence. Even if she could clip through the door with her real body, Maya was afraid to try. Suddenly, she thought of something.

"Come on, guys. Let's hide behind this slimy mausoleum. I have an idea." The trio waited behind the crud covered casket container and waited. Eventually the two jovial skeletons made their way back to the tomb entrance. One rapped his knucklebones on the door and the very ground seemed to shake as the doors slid open and the two skeletons danced their way inside.

"We just have to knock?" asked Lounging Carl, leaning on an errant pile of femurs. "Seems too easy. Let's not do it."

But Maya had already marched out towards the door and knocked. Lunarious and Lounging Carl scrambled to follow her. After a few moments, a loud grinding noise emanated from the doors but they remained motionless. A booming voice followed.

Maya thought fast. "We are skeletons though."

The sound of stone grinding on stone sounded much like a record scratch.

"We're just wearing suits." Maya pulled on her skin as if to prove the point.

"Yeah!" joined Lounging Carl. "Suits made of blood and hair and stuff."

"Also organs," Lunarious added. "And I like to wear another suit over my organ-hair-bloodsuit."

The door seemed to consider this for a moment before sliding open with a cacophonous rumble.

GOOD ENOUGH FOR ME the voice quaked. FOR I AM JUST A DOOR AND NOT VERY SMART.

The tomb door creaked open and the trio crept inside. Irregularly placed torches lit slimy stone steps and passages. They moved corridor to corridor, mostly ignored by the skeletons. And there were skulls, by god, the skulls! Skulls used as candle holders, skulls as goblets, skulls as decoration. Tiny skulls with tiny candles set up like Christmas lights lining the entrance to skull shaped rooms. One skeleton walked by carrying an armful of skulls. Where was he even going?

There were skulls on the door handles and the doormats were made of skulls. A pair of jolly skeletons crouched in the corner and Maya looked over their shoulder. They were rolling tiny skulls as some sort of dice game. One skeleton threw his bony arms up in triumph and collected his winnings (skulls). You literally couldn't walk forward without kicking a skull into another skull. It was madness.

A skeleton band played their own ribs like marimbas (ma-rib-bas?), which gave the entire tomb an island feel that was somewhat incongruous. One skeleton, dressed like Baron Semedi, came marching out of a side corridor, leading a procession of skeleton revelers. Maya was amazed. In the game the skeletons just walked back and forth until they came after you. Is this what they did when they weren't aggressive?

"This is the most incredible thing I've ever seen. It's sort of metal...," Maya mused.

"Is it metal? It seems to be more bone to me, m'lady," replied Lunarious, totally missing the reference.

Lounging Carl butted in. "This? This ain't nothing special. Skeletons are always doing stuff like this. Laughing, joking. Here, watch." He then tapped a passing skeleton mailman on the clavicle.

"You, bone-bag, why did the skeleton go to the hospital?"

The skeleton turned towards him and chuckled, "He had to have his ghoul-stones removed!" The skeleton then joined a festive conga line.

"See?" asked Lounging Carl. "It doesn't even make sense. They don't have gall stones and they're not ghouls. They're just idiots."

Maya didn't know what to say.