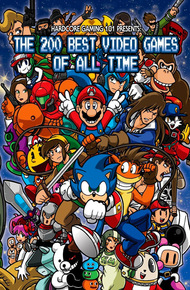 Kurt Kalata is an ardent video gamer from New Jersey. He has founded websites such as The Castlevania Dungeon, which focuses on Konami's long running, vampire slaying series, and Hardcore Gaming 101, which gives comprehensive reviews focusing on the history of gaming. His most recent book is Bitmap Books' A Guide to Japanese Role-Playing Games. In addition to his own sites and books, his writings have appeared in Retro Gamer magazine, The Overstreet Guide to Video Game Collecting, and at 1up, Siliconera, and Gamasutra.

Jonathan Kaharl is a Texan and long time contributor to Hardcore Gaming 101, specializing mainly in indie and adventure games. He most recently edited the second volume of Hardcore Gaming 101's The Guide to Retro Indie Games book series, having written the largest selection of included pieces. Has helped covered franchises such as Doom, Devil May Cry, Syberia, and much more for the website. A few of his pieces have been included in previous collections, most recently the eight volume of the Hardcore Gaming 101 digest, The Bride of Retro Horror, with Doctor Hauzer and Overblood 2. Most of his work has been done among other enthusiasts and on a variety of personal blogs.

Every website or magazine has their own "Best Video Games of All Times" list - here is Hardcore Gaming 101's! From early arcade classics to 3D action games, from text adventures to interactive cinema, this book includes 200 of the best video games ever released, covering over three decades of gaming history, created by developers all over the world. Each entry highlights why our picks are the best examples of their genre, and includes additional recommendations for similar games. Both rookie and veteran gamers will definitely discover some new and interesting games to check out after finishing this book!

"As you may know, we've featured a number of Hardcore Gaming 101 books over recent Game StoryBundles, but this is probably their best to date - a well-written romp through some of the top games ever created that's careful, loving, and not overly populist in its search for the plain amazing." – Simon Carless

In the context of NES platformers, Super Mario Bros. 3 decimates its competition. Even compared to other games in the series, it's a gigantic step upward from the frustrating Japanese Super Mario Bros. 2, and the diversionary (through still excellent) American sequel. Compared to the original game, the screen scrolls in all directions, allowing for more open and less confining stages, including tense levels where the screen automatically scrolls. The map allows alternative routes to the end of each world, with challenging castles at the mid-way points, and airship stages that culminate in fights against one of Bowser's seven children. Put simply, itüfs far more expansive than almost any other similar game on the 8-bit platform.

Even divorced from context, though, Super Mario Bros. 3 excels because of its level design. The stages are relatively short, but each is memorably and skillfully designed. The eight Worlds all have distinct themes ? deserts, oceans, and clouds, with the most unique being one where everything, enemies and bricks, is oversized. There are charming details, like the bushes in the first World map, which appear to dance along with the theme music. The individual levels are filled with foes and items that pop up only a few times, like the menacing sun in the sand stages, or Kuribo's Shoe, a curious one-time item that lets Mario hop around unharmed on spikes. The Raccoon tail is the first (and best) power-up that allows Mario to fly, while several others abilities ? the Frog, Tanooki, and Hammer Bros. suits ? are uncommon, but offer cool abilities. It's the rare game where almost every part of it feels special.