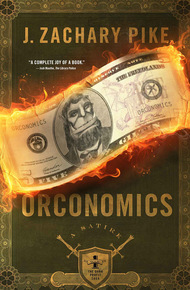 The adventuring industry drives the economy of Arth, a world much like our own but with more magic and fewer vowels. On Arth, professional heroes are hired to slay fantastic creatures with magic weapons. The beasts' treasure is hauled back to town and divided among investors.

Since his career as a professional hero ended in failure decades ago, Gorm Ingerson's life has been a cycle of petty crime, heavy drinking and avoiding the Heroes' Guild. But when the Dwarf helps a Goblin secure its NPC documents, he quickly finds himself in the clutches of the guild's enforcers.

Guild justice means certain death for Gorm, but his captors present him with an alternative: to join a party of misfit adventurers on a quest to join a feeble priest with delusions of destiny. It will take all of Gorm's Dwarven resolve to survive political intrigue, fundamentalist lizard men, purse kobolds, healing potion addicts, and worse. Yet even if he succeeds, it may not be enough to protect his party from the dark secret behind their quest.

If you've ever played MMORPGs, you'll instantly recognise the kind of fantasy world depicted here. J. Zachary Pike gives us a brilliant satire populated by colourful heroes - including one rare example of a woman given space to be broken, and to be awesome anyway. One of my favourite reads of the year. – Charlotte E. English

As a general rule, signs are too subjective a topic for polite company. Where one man sees a sign of blessings to come, another sees bad tidings, and a third is puzzled by the animated discussion his companions are having about an oddly shaped piece of toast. With so much disagreement regarding the meaning of portents, let alone whether there is a meaning at all, it's seldom wise to discuss them. All things considered, however, it's probably safe to say, without fear of controversy, that a crying bride is a bad sign.

Naturally, there's nothing foreboding about a gently weeping bride, her glistening tears only highlighting the joy of her radiant countenance, nor even a nervous bride softly weeping as the stress of anticipation and uncertainty and an overbearing mother-in-law-to-be leaks out before the vows; such things may or may not be taken as signs, embraced or dismissed by reassuring friends and family with equal ease.

A bride whose entire body shakes with wracking sobs, however, a bride whose choking wails send streams of spittle and snot to join the tears running down her face, is almost unquestionably an ill omen.

Just such an unfortunate woman, if she was old enough to be called a woman, stood in a dimly lit stone room, her long white dress soaked in sweat and tears, her dark curls tangled and mussed from a night that should have left her without any tears to cry. Yet, standing in the cold, damp chambers next to a pathetic sliver of a groom—a milk-white, scrawny boy in an oversized suit with a mop of greasy hair that did too little to cover his pocked, ratty face—the bride found a sudden reserve of tears, and she heaved them forth with all the grief she had left.

"Enough, Princess," said the man officiating the ceremony. He wore royal purple robes bearing a silver skull motif that announced he was a wizard. A neatly trimmed beard implied he was meticulous, and his hard expression suggested the ceremony should continue with all haste, lest things become much more unpleasant. "Now, do you swear to stand by your husband, through good times and bad …"

The groom gave his bride a clumsy smile and fumbled for her hand. She swatted his clammy paw away. "No!" she screamed, bursting into a renewed fit of sobs. "No! I won't!"

"Marja, you will marry my son," the wizard said coldly. "The ceremony will be completed, you will take him back to the royal palaces, and he will be third in line to the throne. Quiet, boy!" he snapped, cutting off a comment from the groom. The boy nodded dumbly and looked at the floor.

"What are you babbling about?" barked the wizard. "Nobody is saving anyone!"

"Detarr Ur'Mayan!" called a voice like a trumpet. An armored foot kicked in the great oak doors of the chamber. A knight in shining armor followed.

"Johan!" The princess shrieked in delight.

"Oh, by the gods," said the wizard with a sigh.

"Detarr Ur'Mayan!" he shouted again, crimson cape and golden hair streaming behind him as he strode into the room. "You have been declared a foe of the people of light. I come for the princess, and for your head."

Detarr's lip curled into a condescending smile. "Have I? Well, I think you'll find that I'm not so easily—"

He was cut off by a sudden wail.

All eyes turned to the young groom, who lurched for the back stairs and fled the room in an ungainly, knock-kneed sprint.

"Did he just wet himself?" asked Princess Marja.

The wizard rubbed his temples. "He's been having trouble with … he just gets nervous," he said, his voice heavy with paternal exasperation. "No matter! It's a setback. Just a setback."

"It's your last one." Johan hefted his sword. "Come, sorcerer. To battle. To death."

Detarr made no reply; instead, he pulled his hands into an intricate pose. Thin strands of sorcerous light spread from his palms, and his fingers deftly wove them into an incandescent sphere of dark magic and malice. With a guttural cry, the wizard hurled the spell at the knight with all the force of a lightning bolt.

One moment Johan was standing in the doorway, grinning confidently at Detarr, and the next, he was standing several paces to the left of where he should have been, smirking at the passing spell. A heartbeat later, he was directly in front of the wizard, moving with the fluid grace and speed of a shadow.

"You—" gasped the startled wizard.

"Me," said Johan with a swift swipe of his sword. The air whispered like steel on silk, and Detarr's head bounced on the floorboards. His body slumped to the floor a moment later.

"Johan!" The princess threw her arms around him. "You came!"

"Indeed, Milady." He gently lifted her into his muscular arms. "And now, I shall return you to your father's palace."

"And you shall be married to your good prince!"

"Or not," said Marja suggestively.

"Ha haaa!" Johan trumpeted once more. He strode triumphantly over the corpse of the fallen wizard and out the door, ending a very well known story and setting the stage for an even greater one.