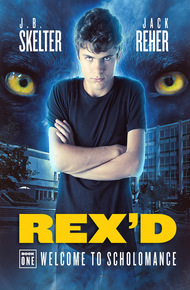 that Mike Macari (The Ring, The Ring Two) is producing. Currently, he's adapting IDW Publishing's upcoming comic book The Shunned One created by Alan Robert for the screen.

J.B. Skelter is an author, high school teacher, and all-around good guy. He has written two other novels under an alternate identity, but his real name remains a closely guarded secret. Skelter lives in a ghost town somewhere in Colorado with his wife, two kids, and pet pig.

Rex'd: Welcome to Scholomance by Jack Reher and J.B. Skelter

MONDAYS. Oh, the horror. Going back to school after a nice weekend. Homework. Tests. Gym class. It's even worse for Rex Gerard, the "new kid" at Scholomance High. Making friends, navigating the rough halls, avoiding trouble...

But on this particular Monday, it's also Halloween. Rex's favorite holiday. It was his mom's too before she passed away. And today, Rex will learn exactly how she died and what his purpose is in this life as he unlocks the hair-raising mysteries and lurking monsters of Scholomance.

Kids' note: "The one about Mondays. And Halloween. And Werewolves!" Curator note: "Oftentimes, there is a certain worry that slithers across an editor's mind when they see a collaboration coming across their desk. But rarely, the collaboration works, and the two authors together end up imbuing their creation with an enthusiasm and wit that may be second to none. In this one, an old-school adventure put together by a screenwriter and a penname of a well-known adult thrillerist, they do just that, and take a reluctant boy hero on a wild goose chaise, cracking a mystery in his new town - and making sure he doesn't stay "a new kid in school" for too long." – Alisa Gus, Curiosity Quills Press

Before the screams and the blood and the terror, everything was calm and still. Other than the tick-tocking of a clock echoing against the barren walls, the seemingly endless hospital corridor was quiet. Pumpkin lights, glow-in-the-dark skeletons, and plastic spiders hung from the ceiling—a nurse's attempt to add festivity to the drab corridor. On one side of the hallway were several neatly lined carts, all full of medical gear: swabs, syringes, dispensaries, towels, blankets, bandages, crash-carts. On the other side, a long row of empty wheelchairs.

A doughy man wearing blue nurse scrubs—black hair splayed in a thousand directions, skin red and peeling from his face—came around the corner, pushing an empty gurney, the rattling, clanking wheels echoing down the hallway. He placed the gurney behind the row of wheelchairs and wiped the sweat from his forehead with his sleeve. After glancing up and down the hallway, making sure there were no other nurses or doctors, he reached into his pocket and pulled out a flask of his favorite "medicine". With trembling hands, he placed the flask to his mouth, squeezing his eyes shut as the liquid burned his throat.

The man brought the flask to his lips once more, shaking with the need for another sip, but his two-way radio crackled loudly, startling him as a panicked voice called through the static. Quickly, he stuffed the flask back in his pocket and gripped the radio tightly.

"I'm leading the convoy of ambulances. It's bad. Multiple traumas. ETA five minutes." "Copy that," the nurse replied. "Estimate on the number of traumas?" For a long moment, there was no more voice, just static. The nurse spoke again. "Do you read me? How many traumas do we have?"

Finally, the voice returned. "Damn near half the school." "Copy that. We'll be ready. Can you—?" The terrible sound of metal being crushed and tires screeching blasted through the

radio. Startled, the nurse dropped it to the floor. He stared at the radio wide-eyed, hand covering his snaggletoothed mouth.

Panicked, the nurse fell to the floor, grabbed the radio, and depressed the push-to-talk button. "You okay? What's going on there?"

On the other end, he heard the sound of glass shattering and terrible raw-throated screams. Then the screams became blurry and muted, suffocated by another sound: an animalistic growl, harsh and depraved.

Legs rubbery and head spinning, the nurse rose to his feet and ran like a madman toward the elevator.