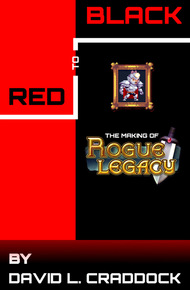 Red to Black - The Making of Rogue Legacy by David L. Craddock

On June 27, 2013, Kenny and Teddy Lee were broke and jobless. After four years working together on smaller videogames—some written over the course of a week, others in a few hours—the two brothers had agreed to pool their resources and create Rogue Legacy, a game exponentially larger in scope than any they had attempted before.

If Rogue Legacy failed, it would also be their last.

Seven days later and 100,000 sales later, they were back in the black. Their recipe for success? Eighteen months, countless arguments, a surprisingly popular game about holding one's bowels, and unwavering trust.

Based on interviews with the development team, Red to Black: The Making of Rogue Legacy tells the story of two brothers who poured blood, sweat, tears, and exactly $14,878 into their most ambitious videogame yet.

"Cellar Door's 2013 roguelikelike Rogue Legacy is still a startlingly good game, and all credit to Craddock for getting under the surface with interviews and analysis to work out just how it got that way." – Simon Carless

Roguelikes are the videogame equivalent of jigsaw puzzles. Using algorithms, programmers shift architecture—walls, floors, platforms, background scenery, breakable objects—in potentially limitless ways. The pieces and parts are the same each time, only arranged differently. Roguelike diehards insist that procedural content, as well as permanent death, are the bedrock of the genre. Teddy and Kenny appreciated the value those staples added to videogame experiences, but saw room for improvement.

The roguelike's inherent volatility often prevents even those who create them from playing through their creations. Glenn Wichman, co-author of Rogue, admitted he's never completed the game. Knowledgeable players have written tens of thousands of words about classics like NetHack, but strategies only help so much against a moving target.

Teddy in particular found roguelikes irritating. No matter how long and how often he played them, he always came away feeling like he had been punished: the cost for experimentation was the permanent loss of his character. All those hours, all that investment in his journey—undone in an instant.

"After we decided to make a roguelike, we said, 'What don't we like about the roguelike gene?'" Teddy recalled. "There's a lot we didn't like. I play them, and I can appreciate them, but I don't enjoy them. I just never had the time."

"One of the first problems we solved was how to add permanency to a game genre that isn't supposed to have permanency," Kenny added. "That was a big thing that set our game apart. That initial decision brought everything else together."

The Lees put a twist on permadeath. In Teddy's design, players collected gold by killing monsters and smashing objects like furniture and pots. They dropped their gold upon dying, but their next character could recover it by fighting their way back to the spot where the previous character had perished, like recovering bloodstains in Demon's Souls.

After shaking up the design to use procedural generation, Teddy changed how gold worked as well. In his new design, players choose from one of three descendants after dying. Creating levels algorithmically offers no guarantee that the chamber where their last character died would be a part of the next floorplan, so going back to reclaim gold was no longer an option. Instead descendants receive the previous character's gold, like collecting an inheritance. Teddy liked the change because it took some of the sting out of dying; even when he lost, he still had something to show for it the next time he played.

The notions of descendants and inheritance became keystones in the revamped design, leading the Lees to formalize their game's title from Rogue Castle to Rogue Legacy. They also devised a story relating to the concept of progeny. "We realized we were making a game with permanence, so some form of narrative has to be written," Teddy explained. "We wanted progression, and the journal system was a form of progression."

Most roguelikes give cursory motivation for dungeon crawling: retrieve some doodad, kill the demon terrorizing a town. Cursory explanations suffice because players ultimately don't care why they're killing monsters and looting temples and dungeons. They care only for the story of their adventure. That story knits itself as they play, every tense encounter and exciting discovery forming a thread woven into the tapestry of their experience.

The object of Rogue Legacy is to kill enemies, plunder treasure, grow more powerful. Their narrative served as a backdrop to those goals. As players slash and blast their way through the castle, they come across rooms furnished with a chair and a desk. Atop these desks rest tomes called Prince's Journals. There are twenty-five in all, seeded throughout the castle's four zones. Reading through every diary reveals a fiction that explores and explains the dynamic nature of the castle.

Written by a character named Prince Johannes, every entry is bite-sized. Some hint at dangers at regions that lie ahead. Most balance drama and comedy. In one entry, the prince writes of his anxiety over finding a chasm in the forest. I still have not heard a response from the rock I tossed in earlier. A single misstep, and my descent would be eternal. It is truly a horrifying thought. An eternity of darkness is more frightening than any beast I have fought thus far. If I fell, what would kill me first? The hunger, or myself? On a side note, I am now using the forest fissure as my own personal lavatory. I wonder if I am pooping into another dimension...

"We tried to be serious, but I guess it boils down to self-confidence issues," Teddy said of the game's story and descriptive text. "I can't write dramatic prose. It gets silly. We just like putting in jokes. I don't think we could ever make a serious game."

Players are free to soak up every scrap of text they find, or ignore them. "We realized that because of the way the game plays, a lot of people wouldn't care [about story]," Teddy explained. "We didn't want story to be intrusive, so we didn't want to put in cutscenes. That led to these diary segments that people could either read or skip."

Whether they realize it or not, players share much in common with Johannes. The prince was one in a long line of adventurers who gave up his worldly possessions for a chance to enter the castle and claim its treasures. His diaries are written for those who follow in his footsteps.

That's where players come in. Every time they die, players choose one of three characters as their descendant. Every descendant exhibits unique traits that affect gameplay. "We realized that we needed to introduce elements of change, and that change had to happen right out of the gate," Teddy said. "That's how traits came about. If your character could literally be born different, that would make the game unique, and you wouldn't have to do all the grinding work."

Traits originally took the form of stat modifiers, such as some heroes being born with greater strength or magical talent. Teddy fussed over finetuning them but eventually discarded the idea in favor of a better one. "The new traits came just because my brother was working on shaders," Teddy explained. Shaders are graphics routines that add special effects to images. "He said, 'Let's try to make something cool,' and he came up with a shader that blurred most of the screen. That's what led to near-sightedness. That was the first trait we made and kept."

Traits are randomly assigned to characters, and many traits are derived from real medical conditions. Near- and far-sightedness causes a blurring distortion around the edges of the screen or character, respectively. A hero born with ADHD moves nearly twice as fast as heroes without. Dextrocardia, a condition where the apex of the heart is located on the right side of the body instead of the left, swaps the player's health and magic meters along with their respective values. An eidetic, or photographic memory allows heroes to vividly recall minute details of the castle layout, while players afflicted with dementia will see enemies that do not exist.

Other traits are cosmetic. Clonus, which causes involuntary muscle spasms, causes the player's controller to vibrate at random intervals. Those who inherit irritable bowel syndrome occasionally pass gas while moving. Nostalgia paints the screen in sepia tones for an old-timey effect.

No matter what traits a character inherits, none put the player at a great advantage of disadvantage. Traits existed to fulfill two goals: to give players an edge, or to give them a laugh.

"We wanted some traits that came with no significant repercussions," Teddy said. "And the reason for that is..." He paused. "There is no reason. We just made them because they were fun. If they were fun and funny enough, we kept them in. We did some balancing to make sure that there weren't too many [cosmetic] traits in the game at one time because we still wanted traits to be a significant part of the experience."

Most characters exhibit a mix of traits, and they usually come with tradeoffs. Gigantism enlarges characters and widens the arc of their swings, but also makes them easier to hit. Hypogonadism sends enemies flying each time players strike them, giving players a way to clear away crowds but also forcing them to chase down enemies they want to kill.

Not every trait lived up to the brothers' expectations. "We wanted to change traits to make them more uniform, in the sense of making negative traits completely negative was intentional, but what ends up happening is a lot of people don't pick them. I never pick nearsightedness because that's annoying to me."