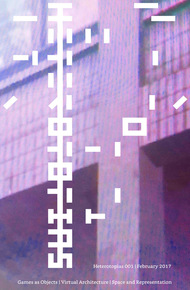 Gareth Damian Martin is a writer, artist and designer.

He is the editor and creator of the videogames and architecture zine Heterotopias and for the past 5 years he has worked as a games critic, specialising in virtual architecture and games as cultural objects. His games criticism has appeared in Kill Screen, Eurogamer, and Edge Magazine.

His design work stretches across graphic, video, exhibition and interactive design. He was art director of Versions and The Meta, both published by Kill Screen, and has produced cutting edge design for clients such as The Barbican, The London Philharmonic Orchestra, The Lego Company and New York's Metropolitan Museum.

As a writer he has self-published procedural prose work including the parallel novellas of TH_READ and the infinite urban landscape of The Narrated City, and he is currently a PhD candidate at Royal Holloway, University of London. His obsessions include: architecture (virtual), literature (procedural) and memory (fictional).

Heterotopias is a new digital zine focusing on the spaces and architecture of virtual worlds. Not an empty ode to the fidelity of digital realities, but a critical dissection of spaces of play, exploration, violence and ideology, Heterotopias aims to develop new ways of understanding games as cultural objects.

Issue 001 discusses the worlds and architecture of four games, from the darkly poetic laboratories of Playdead's Inside to the cultural fantasy of Tomb Raider's buried chambers.

Its central feature looks back at Kane & Lynch 2: Dog Days' singular vision of Shanghai, with a visual exploration that uses 35mm film photography to try to capture both its urban language and the distorted, camera-eye the player experiences it through. A conversation with the game's Art Director, Rasmus Poulsen provides new insight into the process of making the game and an understanding of how the game captures a Shanghai that no longer exists.

001 also features guest writing from Darran Anderson, author of Imaginary Cities and acclaimed writer on culture, technology and politics through urbanism, as well as Chris Priestman, who runs curation website Warp Door, and writes regularly for The Guardian, Edge, and Gamasutra.

"'The spaces & architecture of virtual worlds' is a super-interesting thing to focus on for a zine, and this clever inaugural issue, including insightful writing & art on Kane & Lynch 2, Tomb Raider & more, has been made available for Kindle for the first time here (alongside the original PDF version)." – Simon Carless

In 1859, in response the advent of early photography, Oliver Wendell Holmes wrote that from that day on: "Men will hunt all curious, beautiful, grand objects, as they hunt the cattle in South America, for their skins and leave the carcasses as of little worth." The era of the image had arrived, and he saw a future approaching, where "form is henceforth divorced from matter." That future is our present.

We are outnumbered by virtual worlds, overwhelmed by virtual architecture. Videogames and digital art have furnished us with a hundred thousand matterless forms—landscapes where no rock or earth has ever been present, cities founded on depthless skins of image and texture, expanses that will never see the light of a true sun.

And yet, somehow there is material here, a new kind of matter. Some of it is borrowed—photographs, texture references, photogrammetry. Other parts are inherent properties of digital worlds—their obsession with surface, the logic of their light, their base particles; pixels, voxels, polygons. When in The Beginner's Guide Davey Wredin brings the player's attention to the flat grey square that marks the limit of a level's starry skybox, calling it "the bottom of the universe" he points to an odd truth: These worlds, these universes, are objects, and unlike our own, they have limits.

This is a perspective we rarely take. As the audience of these virtual worlds their total fictions are seductive, intoxicating. We want to believe. And yet, in this blinkered state we close ourselves off to the unearthy wonders in front of our eyes. Virtual worlds are strange mirrors.

The name Heterotopias comes from Michel Foucalt. It refers to sites where real spaces are, in his own words "simultaneously represented, contested, and inverted." What better name could there be for our objects torn free of matter, our virtual worlds? They are, in the end, representations—cultural objects that connect to history and politics (as both guest writers, Chris Priestman and Darran Anderson, show with their pieces on Strider and Tomb Raider.) They are contentious, constructing arguments from architecture and space, as I indicate in my piece on Inside. And they are inversions, as is clear of Kane & Lynch 2's Shanghai: "the city turned inside out".

This zine is part of a project I have dreamed of for a while, a process where, in an echo of Wendell Holmes, we hunt the skins, with the intention of connecting them back to the matter they have forgotten. To make them real once more.