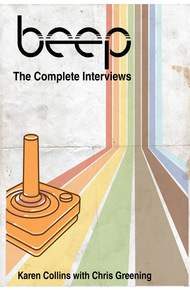 Karen Collins is Canada Research Chair in Interactive Audio at the Games Institute. Her work focuses primarily on sound and music in games, and explores how new technologies impact our audio experience. In addition to the Beep Book, she has published four books on game audio; Game Sound (MIT Press 2008), From Pac-Man to Pop Music (Ashgate 2008), Playing With Sound (MIT Press 2013) and the Oxford Handbook of Interactive Audio.

The Beep Book is transcripts of interviews with over 100 game audio professionals from a range of areas of game sound's history. The majority of the interviews were conducted as part of the Beep documentary film project by director and author Karen Collins. These are supplemented by interviews done for Video Game Music Online by Chris Greening. The book is ~410,000 words in length—a huge volume of material spanning decades of video game and pinball audio history. Interviews include artists such as Marty O'Donnell (Halo), George "The Fat Man" Sanger (7th Guest), Nobuo Uematsu (Final Fantasy), Yoko Shimomura (Kingdom Hearts), and many, many more. The interviews aim to explore the changing nature of game audio over time. Interviews are with people from all over the world, including Japan, USA, Canada & Europe, and took place from October 2014 to July 2016. They cover a range of expertise and experience levels, and include composers, sound designers, voice actors and directors, record labels, conductor, orchestrators, chip musicians, hardware and software creators, and more.

"Conducted for the acclaimed game audio documentary of the same name, there's a ton of amazing interviews with notable Western and Japanese game audio greats in here, all faithfully and carefully transcribed." – Simon Carless

One of Britain's most in-demand game composers, James Hannigan brought classical finesse and cinematic flair to titles such as Harry Potter, Command & Conquer, and RuneScape. He is also a leading communicator in the field of game audio, as a co-creator of the conference series Game Music Connect and a contributor to Classic FM.

You started in 1994. Can you talk about some of the technological challenges as a composer in those days?

They've always existed in games, I think. I think a lot of people who are new to this industry now, they tend to think that issues around interactive music and things like that are actually quite new in games, but when I came into the industry, there were a lot of technical constraints around music. They're different from those that exist today. They're more to do with storage space and the quality of the delivery and the sort of compression technology, that kind of thing that was in use then, and the storage space. By that, I mean the available RAM or disk space, that kind of thing. I just avoided the chip music era, so I was fairly lucky there. I say lucky. I love chip music. But I didn't have to get my hands dirty with that. I entered the scene when sound cards were quite heavily in use, especially the PC platform. And streamed audio was coming in on hard disk and CD-ROM. My background is really in recorded music. So the challenges that were emerging then—I think it probably quite similar to the ones that exist today, which are those surrounding digital audio in general, how you organize music for playback, working with interactive music systems, that kind of thing.

Sometimes constraints can be a useful process to the composer. What have been the biggest improvements, and what do you miss about the early days?

It's funny. I mean, you say about the constraints being quite useful in a way. I think when you have those boundaries and you know that you have to work within them, it does focus you on the problem and you're not sort of fooling yourself into feeling that if you have more resources and more equipment, more sample libraries, that kind of thing, more sound sources, all kinds of technology that is available today, that's going to help you. I quite enjoyed working with a fairly sort of limited technology but I wouldn't say that the process, the process of composition, has changed that much in my experience. It's just that perhaps interactive music is a little bit more publicized and sort of seen as normal now, whereas I think it was probably quite advanced then.

EA had some very sophisticated playback technology, at least for that era, that was purpose-built. The audio engines, the interactive music system was created by the audio coders who worked at the studio. And I think that what's changed since then, really, is the sort of the off-the-shelf solutions that have emerged for prototyping interactive music and experimenting with audio. So the fundamental process of composing and implementing—I don't like that word, it's a very technical word—but placing music in a game, I don't think, has really changed that much. But the quality of the audio has gone up, I suppose, as the underlying audio technology in the consoles and PCs has risen. So I don't know if it's fundamentally changed. I don't know if things are any clearer in terms of the purpose of sound and music in games. But the delivery, it seems to me, is essentially the same.

What were some of the other compositional constraints? How did you make decisions about what music should loop?

I kind of regret saying things haven't changed. I guess they have. I just meant fundamentally it's just sort of more of the same, do you know what I mean? It's sort of not the paradigm shift, there's nothing like that that's gone on since then. I guess it's true that some of the constraints that existed then around music were partly due to a kind of inequality. There was, some games had really great playback systems. Others didn't, and really it depended on the audio department working on a particular project or whether the game was being published by EA, or whether the sound was actually passing through the studio, and the audio department at the studio. The internal EA team were put on the project to sort of try and improve it. That sounds terrible, but very often the developers they work with didn't have audio teams. So there were very sort of crude techniques in use then. There was a lot more looping that went on in games. Slightly less imaginative, you could say, the playback of music. But stemmed music, layered music, that kind of thing I can remember doing that in the late '90s.

Quite a few of your scores have been for games that built off existing IP. Harry Potter, Lord of the Rings, Transformers...What are some of the challenges you face as a composer when you're coming on a project that has this big fan following?

It is very tricky when you start working on a project like that, because obviously, I mean, let's take the example of the Harry Potter games. They were the games of the films. You know, the films aren't the films of the games, so, obviously, the music is always going to be overshadowed by the film music. That's inescapable. So yeah, you're entering a situation where another composer or other composers have already created a stylistic framework for that series. And you have to kind of operate within that, to be true to the franchise and what people expect with, say, the Harry Potter universe, so that's quite constraining, but I think that there's a lot that you can do within that to put your own stamp on things. Because it's not just a question of being stylistically similar to another composer's music. It's also choosing why you have the music, when you hear it, and the purpose of it in the game. And that's a very important part of the process. And I think even within a genre, sort of fantasy genre, there's still a lot of room to kind of be different and the same, you know. You can sort of be on the same page, but you can go in various directions and still be fairly experimental with what you do.