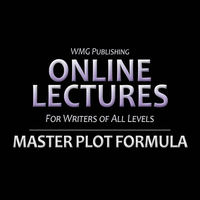 WMG Publishing Inc. offers writers over twenty-five lectures on various topics. From writing short stories to business thinking to cover creation and everything in between, with more lectures premiering regularly. WMG Publishing also offers over twenty online six-week craft and business workshops. For more information on all the workshops and lectures, go to www.wmgpublishingworkshops.com.

WMG Publishing has a variety of lectures, online workshops, and in-person workshops, all focused on writing and the business of writing. Master Plot Formula focuses on craft. In the lecture's nine videos, you'll learn all the essentials of writing a compelling plot without letting the reader know you're manipulating them at all. – Kristine Kathryn Rusch