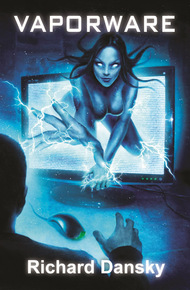 Writer, game designer and cad, Richard Dansky was named one of the Top 20 videogame writers in the world in 2009 by Gamasutra. His work includes bestselling games such as Tom Clancy’s Splinter Cell: Blacklist, Far Cry, Tom Clancy’s Rainbow Six: 3, and Outland. His writing has appeared in magazines ranging from The Escapist to Lovecraft Studies, as well as numerous anthologies. The author of the critically acclaimed novel Firefly Rain, he was a major contributor to White Wolf’s World of Darkness setting with credits on over a hundred RPG supplements. Richard lives in North Carolina with his wife, statistician and blogger Melinda Thielbar, and their amorphously large collections of books and single malt whiskys.

Video game projects get shut down all the time, but when the one Ryan Colter and his team have poured their hearts into gets cut, something different happens: the game refuses to go away. Now Blue Lightning is alive, and it wants something from Ryan - something only he can give it.

And everybody knows how addictive video games can be...

The building was empty.

There’s a certain feeling an uninhabited office has, a sort of echoing purposelessness that bounces off the walls and can only be assuaged by the return of the workforce in the morning. Only then does the building acquire its proper hum and vibe, the right level of chatter and argument bouncing through the halls. Until then, the office sits and waits and feels sorry for itself.

There was none of that when I went inside. Instead, there was a nervous energy that didn’t belong, a feeling of something that had been interrupted, unhappily.

I had a feeling I knew what that was.

The lights were dim, providing enough glow to see but not enough to do anything useful. It gave the hall a sinister air, yellow light on dead-orange carpet and taupe walls. Termites would feel right at home, I thought, and headed for Terry’s team room.

It was dark, but it was always dark. The shades had been drawn to make sure no stray light—whether from street lamps, stars, or that old devil sun—ever made it inside. This room was made for huddling over your work and getting it done, plain and simple, and night did not improve its character or sociability one bit. Green and amber lights shone off monitors and dev kits, making scattered constellations here and there.

I didn’t expect an answer. He was gone, and frankly I wasn’t exactly sure what I’d say to him in any case. “Getting any from your monitor lately?” didn’t seem like a good start to a potential conversation, and the other openers I had were worse.

I stepped inside. The room smelled odd, with the sharp crackle of ozone layered over the usual aroma of stale bodies and snack food. I’d been half expecting the place to smell like sex, but there was no hint of that at all. There was just the sharp tang of electricity, as if there’d been a spring thunderstorm in the room, one of fearful intensity but short duration.

“Terry? If you’re here, pal, let me know.” His desk was halfway down the room and on the left-hand side. I passed other desks slowly, hesitantly. It may have been my duty to try to find Terry, after all, but that didn’t mean I wanted to run into whatever he’d been communing with.

Another step forward, and something gave a hesitant crunch under my foot. Pulling out my phone for light, I eased back a step and took a look at what it might have been before I’d bigfooted it.

That part was easy. It was a webcam, one of Leon’s. A length of wire jutted out of the back, maybe six inches’ worth, before it had been melted clean through. I held up the phone and looked around. Other black shapes lay on the floor, little tails of wire sticking out behind them.

The phone buzzed, and I nearly dropped it. Another chirp, and I felt sufficiently recovered to answer. “What?”

“What yourself?” It was Michelle. “Where are you now?”

She didn’t sound satisfied with that answer. “What about the other…thing? Is it there?”

I glanced around the room. No electronic enchantresses met my gaze, and from where I stood, the monitors on Terry’s desk looked deeply unerotic. “Not that I’ve noticed. Though you may want to tell Leon he’s going to need some new webcams.”

She chuckled nervously. “He’ll be thrilled to hear that.” In the background, I could hear Leon moaning, his anguished voice asking after the fate of his equipment. Michelle shushed him, then turned her attention back to the phone. “Have you checked his desk yet? There might be something there.”

I opened my mouth and swallowed back a double shot of annoyance. “Gawrsh, I never thought of that, Michelle. I was on my way there when I had to stop and answer my phone. Maybe when I’m done talking, I’ll be able to get back to it.”

“Uh-huh.” She sounded unconvinced. “It’s been twenty minutes since I called you in the parking lot, Ryan. How long does it take you to go down a hallway?”

“Whatever. Tell it to your girlfriend. She’s gotten used to your interesting time sense, I hear. In the meantime, how about you walk over to that desk and use your camera app to take some pictures and send them back here. I’d like to see what the hell happened.”

It didn’t surprise Michelle, though. “We can argue about our personal lives later, thanks. Just see if there’s anything weird at Terry’s desk, then go home, all right? I’ll be happy to have a screaming fight at work tomorrow.”

“Can’t. Too many meetings scheduled. Can we have the screaming fight on Thursday?” That was a joke, a weak peace offering. Silence told me she was considering it.

“Just go look at his desk, and don’t tell me if there’s anything sticky there, OK?”

Offering accepted, sort of. I didn’t say anything further, not wishing to push my luck, and instead pocketed the dead webcam before walking to Terry’s desk. Michelle kept quiet, too, though I could hear faint echoes of Leon providing worthless suggestions and advice.

Something had happened there, I saw when I reached it. Terry’s chair was flipped over, backwards, on the floor. It looked like he’d left in a hurry. His desk was a mess as well, speakers on their sides and monitors turned at angles that would have been damn near impossible to use for work.

“Not now,” I answered. “Hold on one minute.” Slowly, I leaned forward to examine the new angle the monitors made. Something about it triggered a thought…there. A look over the top of one confirmed it.

I was staring at a desk that had a length of cable dangling off of it. That cable, I was quite certain, had previously been attached to a webcam. He’d moved the monitors for privacy, which meant that he’d found the webcams.

A memory struck me, the woman-shape Terry had been caressing staring directly into the camera and smiling. No, Terry hadn’t found the camera. Terry hadn’t been in shape to notice anything. She’d done it. Maybe he’d moved the monitors, but that was all.

And now he was gone.

“All right,” I breathed into the phone. “He was here, he’s gone, and he left in a hurry. I’ve also got circumstantial evidence that he and Miss Zinger, or whatever that thing was, did something after our connection shorted out. What, I’m not daring to speculate.”

“Your guess is as good as mine on that,” I told her. “But he’s gone. Do you still want pictures?”

She thought for a minute. “Yeah, not that they’ll do any good. But give it a shot.”

“OK,” I told her, and started snapping away. Monitors, chairs, speakers, dead webcams, you name it. A thought struck me, and I put the phone to my ear. “Hold on a minute,” I told Michelle. “I want to try something.”

“Nothing stupid,” she said, but I was already putting it down on the table.

Terry’s system was off, unlike most of the others in the room. It had most certainly been on earlier, and I was curious to see whether it would still boot up or if it had been fried by his encounter. The case was under his desk, placed there to save desktop footprint, so I dropped to my knees and hit the power switch.

I pressed it again, and held it. Still nothing. Faintly, I could hear Michelle demanding to be told what the hell I was doing. I ignored her, and pressed the button. Third time was the charm, or so the story went, and I pressed and held it for a full ten seconds.

There was a shriek of static from my phone, and Michelle’s voice halfway through calling my name before it was abruptly cut off. White light flooded the room over my head, and I debated for an instant whether it was worth it to look and see what was making it.

Brave man, that’s me all the way. The light grew brighter. I peeked up over the edge of the desk.

I didn’t see a woman, at least, and that was a plus. No face, no anomalous features, no static shaping itself into something I’d rather not see. Instead, there was just light pouring out of the monitor, light so intense that it could only be described as pure.

One by one, the other monitors in the room started showing it as well. Beams of brilliance shot out, one to the next, and the brightness was a sudden knife to my eyes. My fingers jabbed at the power switch on Terry’s system, but it didn’t do any good. More and more light poured out while the whine of the fan inside his CPU case reached an agonizing pitch. All across the room, the process repeated until it sounded like the computers were screaming, howling in agony at what they were being forced to do.

I couldn’t see any more. There was too much light, too much brilliance. Everywhere I looked was white. I shut my eyes, but it did no good. The webwork of veins in my eyelids stood out, bloody pink against the brilliance behind them. Part of me wondered if this was going on all over the building; the rest just wanted to know how much of it I could take before I went blind.

My hand slipped off the power button and I let it. Instead, I reached along the case. I could feel it shuddering, bucking under my hand. Inside, the grinding of the hard drive provided an ominous counterpoint for the scream of the fan. I got a faint whiff of the burnt peanut butter smell that always accompanies a computer flame out, and that spurred me on to panic. Blinded, in a room full of burning computers? No thank you.

The back of the system was unpainted metal, not plastic or enameled aluminum, and it was hot to the touch. I jerked my fingers away, burned, but quickly shoved them back, my hand splayed against the machine as I looked for what I needed.

It was there, right where it was supposed to be: the power cord. “When in doubt,” I whispered, “pull the goddamned plug.”