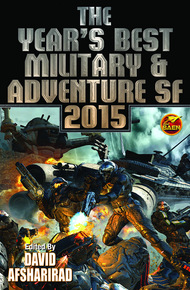 Editor David Afsharirad lives in Austin, Texas. He is a graduate of the University of Texas at Dallas and North Carolina State University, where he earned an MFA in creative writing. A life-long reader and writer of short fiction, his stories have appeared in various magazines and journals.

The new Golden Age of short science fiction has arrived! Selected from the premier print and online markets in the field, here are stories to challenge, provoke, thrill, and entertain. Stories of future military men and women, space opera on a grand scale, and edge-of-your-seat adventure science fiction in the grand pulp tradition. The second volume in an on-going series, The Year's Best Military and Adventure Science Fiction, features stories by giants of the genre and the hottest new voices.

Plus, you be the judge! INTERACTIVE READER VOTING. One story from this anthology will be chosen via proctored online voting for The Best Military and Adventure Science Fiction Reader's Choice Award, presented at DragonCon in Summer 2016. For more information, go to Baen.com.

The editor of the Year's Best Military and Adventure SF. Now that was a no-brainer! Another of the titles Baen Books provided for the bundle, but David is also a good friend and a terrific guest at our booths when we exhibit at shows. I am very thrilled that Baen is doing this series annually, and I hope this will get more readers for future volumes. – Kevin J. Anderson

Here we are another year farther into the future. A lot has happened since the first volume in the Year's Best Military and Adventure series launched in June of 2015—including a name change, but we'll get to that later. That first volume sold briskly and garnered some excellent reviews. (Check the back cover for examples; I'll wait.) Many of the folks who bought the book elected to vote in the readers' poll, and at Dragon*Con 2015, I had the pleasure of handing out the very first Baen Books Year's Best Military SF and Space Opera Readers' Choice Award to Michael Z. Williamson, for his story "Soft Casualty." Mike was on hand to receive a handsome plaque as well as a handsome stack of five one-hundred dollar bills.

Let's see . . . what else happened over the last 365 days? The sun kept shining, the world kept turning—and SF writers kept producing high quality short fiction. Which is why I've asked you all here today.

But first, about that name change:

When assembling the first volume in the series, I asked Baen publisher Toni Weisskopf about those stories that were excellent but were only kinda sorta space opera and/or military SF. Would we rather have superlative stories that didn't quite fit the theme of the book, or merely great ones that certainly did fit the theme? We both agreed that we'd be willing to stretch the definitions to ensure that we got the best of the best. And stretch we did, though I should say not to the breaking point. For this year's volume, we decided that the old title just wasn't inclusive enough. Hence the name change to The Year's Best Military and Adventure SF. And now, as Paul Harvey used to say, you know the rest of the story.

So what did the year's best military and adventure SF look like in 2015?

Well, some old friends from the first volume came back. Seth Dickinson, whose story "Morrigan in the Sunglare" was in last year's anthology, returns with another story set in that same universe. "Morrigan in Shadow" finds the Earth-based Federation surrendering to the extra-solar colonial Alliance, a move that may spell doom for humanity as there's a particularly nasty alien menace heading our way. Eric Leif Davin is back with "Twilight on Olympus," a story of humanity stepping out into our own celestial backyard—Mars to be precise—and the dangers that are inherent in space travel. And Brad R. Torgersen brings us "Gyre," a story of the Sargasso Containment, in which our solar system is surrounded by a mysterious, impenetrable force field—and being consumed by crippling addiction to a drug known as Rust.

But of course we've also got some fresh faces and the stories these faces (or the brains behind them) produced take us from the recent past to the far, far future.

In Joe Lansdale's "The Wizard of the Trees," a cowboy from Buffalo Bill's Wild West Show finds himself mysteriously transported to a Venus of which Edgar Rice Burroughs would approve. No one does ERB better than Lansdale (except the man himself), and "The Wizard of the Trees" is a shining example of Champion Joe's work in this milieu.

David Brin brings us another tale of the second planet from Sol. This one is called "The Tumbledowns of Cleopatra Abyss" and it proves that the death of classic SF stories has been wildly exaggerated.

From the warm embrace of our sister world Venus, we turn to the cold vacuum of the space between the planets. That inhospitable locale is the setting of Claudine Griggs' "Helping Hand," a tight little adventure tale of a spacewalk gone very, very wrong that will have you reading at the very edge of your seat.

In Andrea M. Pawley's "For the Love of Sylvia City," we leave outer space and head to the floor of Earth's oceans, where humans have retreated to avoid the threat of devastating war—until the war threatens to come to them.

On the military side of things, we have Brendan DuBois' tale of a world besieged by hostile alien invaders—and the brave humans who stand up and fight! That one is called "The Siege of Denver" and it gets things off to a rousing start. Hank Davis takes off his editor's top hat and dons his author's ball cap to bring us a military SF story with a touch of the Weird that fills us all in on what exactly is "The Trouble with Telepaths." And in her moving short story "Remembery Day," Sarah Pinsker contemplates the value of memories—even painful ones—for soldiers, and for those who are left behind when they go off to war.

But let's leave our backyard and go traveling, not only in space, but in time. In "This is the Way the Universe Ends: With a Bang," Brian Dolton offers up a rousing whodunit that will keep you guessing until the very end—of time!

And if all that wasn't enough how's this grab you: The first Hammer's Slammers story in over a decade. Fans of Drake's legendary series thought it likely that we'd seen the last of the Slammers, but editor Mark L. Van Name was not content to let the mercenaries go gently into that good night. He commissioned a new Slammers story from Drake for his anthology Onward, Drake! and Drake, the consummate professional, obliged by writing "Save What You Can."

And what could top all this? (Please don't say lids.) How about an introduction by another master of military SF whose first name happens to be David?

David Weber's Honor Harrington series is a landmark in the genre, with millions of copies sold, an ongoing comic series, and a major motion picture in the works. He kindly took time out of his schedule of writing top-notch military SF bestsellers to pen a fine introduction for us.

So what are you waiting for? Turn the page and start reading! But don't forget to jot down notes as to which story was your favorite because once again we're asking you to pick the Year's Best Military and Adventure Science Fiction story!

To find out how you can cast your vote, go to http://baen.com/ yearsbestaward2015. But don't hesitate—voting closes August 31, 2016.

And while you're reading The Year's Best Military and Adventure SF 2015 and voting for your favorite story, I'll be scouring every nook and cranny of the SF publishing world to bring you the best of the best next year. Stories that prove that the short story isn't dead, isn't dying, and that the Golden Age of the science fiction short story is the ever-present now.