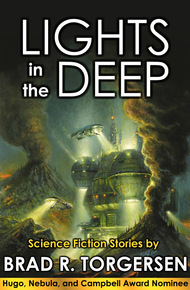 Lights in the Deep by Brad R. Torgersen

Ten astounding tales by triple award nominee Brad R. Torgersen. Go on fantastic new adventures at the bottom of Earth's oceans and at the edge of the solar system. Meet humans who are utterly alien and aliens who are all too human. Originally featured in the pages of Analog Science Fiction and Fact magazine as well as Orson Scott Card's InterGalactic Medicine Show, these stories are gathered here for the first time, along with anecdotes and other commentary from the author.

One of my writing students who has hit the big time. A career Army officer, Brad has also volunteered at our annual Superstars Writing Seminars, and he's a winner in the Writers of the Future contest. WordFire published his first story collection, with some real gems. – Kevin J. Anderson

I was eleven years old when the Earth burned.

I can still remember Papa running into the hotel room on the space station, screaming. What he said, exactly, I can't recall. But there was fear in his eyes when he picked me up and threw me over his shoulder. He did the same with my little sister, Irenka, and then he was back out the door—both of us bouncing across his deltoids like sacks of potatoes.

Papa didn't stop for luggage, nor any of our toys.

Not even my special chair.

I remember the curved corridor being filled with adults: screaming, fighting, and yelling.

One of them got in Papa's path, and Papa literally kicked the man out of the way.

Papa had never hurt another human being in his whole life.

Irenka, who was just four, kept calling for Mama. But Mama had been at a conference on the other side of the station, and we didn't see her anywhere.

I kept thinking about my chair. If whatever was happening was bad enough for Papa to forget my expensive new chair, then it was really, really bad.

When we got to the hatch for the ship, there were big people with guns and they wouldn't let Papa onboard.

Papa yelled at them. They yelled back.

I remember Papa slowly putting Irenka and me down on the deck and hugging us both very closely, his big hands stroking the backs of our heads while he spoke.

"Mirek, you're the oldest. You have to take care of Irenka. And Irenka, I want you to be good for your brother and do what he says. Because you both have to leave this place and I can't come with you."

The big people with guns moved aside and other people, wearing crew jumpers, came through the hatch and tried to take Irenka and me away from Papa.

I wouldn't release him.

Irenka kicked. I shrieked, because I couldn't kick.

We hung onto Papa's shirt for dear life.

Ultimately, Papa yelled at us so loudly it made us silent, because we'd never heard Papa say such words to us before, nor in such a loud voice.

He apologized and kissed us both. We let go of his collar.

"Remember me," Papa said when the crewpeople took us away. "Remember your Papa and Mama. We will always love you!"