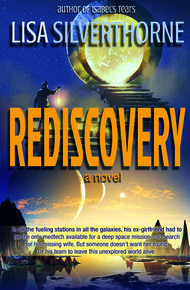 Of all the Fueling Stations in all the solar systems, she had to be on FS-314. Tarateal Roberts, Captain Quinn Sayre's space shy ex-girlfriend, would be the only medtech up for reassignment in the whole damned quadrant?

When a Search and Rescue mission turns into a recovery mission, Sayre must sign aboard a third medtech or abort his mission to recover his wife's body from an uncharted world. His last chance to bring her home and find out what happened on the failed first contact mission.

Tarateal Roberts just wants to go home. Back to the safety of Earth. But the only way home to Earth is to gain deep space experience. She'd chosen this mission to uncharted Nearra because it was short, but if she'd known that Quinn Sayre held her contract, she'd have dumped this mission so fast. Like he'd dumped her on the steps of the flight academy. It seemed like a lifetime ago, but seeing him there on the tarmac brought it all back—raw and electric.

Unable to get out of the contract, Tarateal reluctantly boards the scout ship, not knowing that Sayre's wife and three other First Contact team members disappeared under suspicious circumstances.

Further complicating Sayre's life is the arrival of former military commander-turned-government agent who still blames Sayre for the death of his son and the destruction of his ship. Former Commander Kenrick Gage is assigned to oversee Sayre's contract and still vows to convict Sayre on privateering charges.

When Sayre and his crew reach the uncharted world, Nearra, they discover that something isn't right with the remaining First Contact team. They provide few answers about their missing team members and they seem eager for Sayre and his crew to to leave.

Forced to rely on each other, Sayre and Roberts struggle to uncover the fate of the First Contact team and locate Larena Sayre's body. Somewhere in the middle of conspiracies and the alien species on Nearra, Sayre and Roberts rekindle their relationship and rediscover what brought them together.

As an acclaimed and prolific writer, Lisa has published over seventy stories in fantasy, romance, science fiction, and mystery in major publications all over the world. I was lucky enough to buy for Fiction River: Moonscapes her fantastic sf story "Moonfall." In her novel Rediscovery, I love how Lisa not only paints a picture of a vast civilization, but allows us to get up close and personal with the characters. Science fiction at its best. – Dean Wesley Smith

From the infirmary portals, Quinn gazed out at Nearra's swirling blue mist. Moisture streaked and vibrated across the portals as he felt the Magellan's bulky nose nudge through the vapor. Black, muddy water covered with a thin, blue film. Gnarled brush dotted the edge of the black water. Mist hung above brown, shriveled foliage.

A massive thunderhead glided into view on the murky horizon. The ominous sight made Quinn think back to his childhood. On Earth in the Midwest Biosphere—Tornado Alley—that's where he'd grown up. Back then, the radars could only pinpoint where tornadoes might form, not alert before they developed like now. If they were close, he and his sister would rush to one end of the biosphere to watch. This slate grey obelisk looked no different from those Oklahoma wall clouds.

The Magellan pitched and Quinn reached out for the stick that wasn't there. Roberts gave him a peculiar look as she ran a quick medical scan. She seemed to have mellowed considerably. Maybe she'd work out after all?

He felt the ship level out and adjust its altitude with the sudden rush of wind speed. A fierce gust of wind rushed over the hull with an ominous moan. Another one sent the Magellan rocking.

"We're flying into a damned tornado," Quinn muttered, trying to unfasten his restraints. He had to get up there. He had to.

Foliage rushed past the portals.

"Sayre, no!" Roberts cried. She refastened his straps and then plopped down in a restraint harness beside his sickbed.

"Approaching base camp landing strip," Sheryl announced over the comm. "Lock into your restraint harnesses now. This isn't my idea of a landing strip, but it's all we've got."

Relieved, Quinn laid back against the bunk, but a sharp surge of air slammed against the Magellan's nose. Not now! They were so close to the landing strip.

Again, air smashed into the nose, plunging the Magellan toward the dark bog below.

A siren shrieked through the ship as emergency red lighting filled the halls.

"Dammit," Sheryl growled. Her voice echoed through the deathly silent ship. "Auxiliary engine has gone off-line. Looks like we're in for a rough one. Prepare for emergency landing. Repeat, we're in for a hard landing."

Quinn felt the craft's rotation increase as Sanji's grave tone crackled through the comm, outlining emergency procedures. Quinn could feel Sheryl trying to pull out of the spin, but the wind sent the ship reeling faster every time she moved the stick. He felt trees gouging the hull and he feared it would breach.

Suddenly, he felt it.

That moment all pilots feared the most. He felt the Magellan go out of Sheryl's control, snapping off treetops and scattering branches.