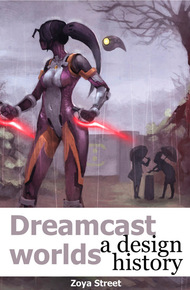 Dreamcast Worlds takes a unique approach - in this book design historian Zoya Street tells the story from right inside the games themselves.

Travelling through the maps and screens of three Dreamcast games, follow the network of players, developers and events that contributed to the Dreamcast phenomenon. This is a spatial history of videogames, focusing on a time when 3D, open-world virtual play spaces first became possible.

This project began life as a Master’s thesis at the Victoria and Albert Museum in London. One crowdfunding campaign and a year of hard work later, this unique book has become a must-read for anybody with an opinion on video games.

Telling the story of the Dreamcast through its game worlds - looking at the classic Sega console and three stand-out titles, including Shenmue, Skies Of Arcadia and Phantasy Star Online.

Excerpt: From the chapter on Shenmue

The high level of historical details in Shenmue’s recreation of 1986 Yokosuka is as much about setting an emotional tone as is it about establishing accuracy. For one thing, they are not consistently accurate. The Sega Saturn in Ryo’s home is anachronistic – set in 1986, but Saturn released in 1990s. Nevertheless, a slavish devotion to accuracy informed work on all areas of the game, possibly in spite of calls for restraint from higher-ups at Sega.

Yu Suzuki recalled in a 2011 interview that Sega head Hayao Nakayama had wanted to ship games as soon as they looked good on a screen. To enable him to continue polishing games after this point, Suzuki installed a button under his desk that would occlude the graphics whenever Nakayama was nearby. In another interview, main programmer Tak Hirai said that the hardest challenge in making Shenmue for him was programming the movement of the phone cable, an item which, he hastened to point out, was never visible on-screen: “The phone cord wasn’t even showing up on camera, but [Suzuki] insisted on making it look realistic”.

This devotion to accuracy carries through into the way that time itself is represented. Time forms an integral part of the spatiality and worldiness of Shenmue. Time passes in absolute terms, at a rate of about one in-game hour for every real-world ten minutes, rather than only passing in dependence on player action as in many RPGs. The actions and events required to complete the game must be finished in seven in-game months, or else it will fail and the player will have to start again. Even the changes in weather, which affect the response to player interaction for objects relating to certain side quests, are scheduled for particular dates according to meteorological data from the years 1986-1987.

The high accuracy of Shenmue’s Yokosuka gives the game a very stable rooting in what was for many people a real childhood. Yokosuka is special because of the way it connects to the rest of the world through its harbour, but it is also very ordinary, and looks much like most other Japanese suburbs and small towns. For many players buying Shenmue on release in Japan, Shenmue closely depicted the site of their own childhood. Like a photograph, Shenmue captures a moment lost to time.

Large parts of Shenmue’s interactive elements provide purely emotional payoff – they don’t provide any benefit to progress in the game, but they make the experience richer in ways not covered by rule systems. In the pleasant suburb of Sakuragaoka, you can help a small child to raise kittens by feeding them tuna, or help a short-sighted old woman to find her neighbor’s house. In Dobuita you can buy a thirsty man a drink from a vending machine and play arcade games. None of these actions affect the outcome of the game except by providing a little bit of extra dialogue with the residents of Yokosuka, or a passing experience of enjoyable interaction with a kitten or a vintage game. In this sense, Shenmue is a role-playing game and not a roll-playing game, a term used by tabletop game fans to distinguish between playing a game to tell a story and playing a game to find the optimal solution to a mathematical problem. Shenmue’s lack of many of the mathematical mechanics that define the RPG genre reflects an emotion-led focus in the game’s design. Part of these emotions is the game’s nostalgia for an imagined childhood in Japan.

In the European tradition, nostalgia was understood by the ancient Greeks as a malady afflicting soldiers serving far from home, but eventually came to be seen as a positive form of emotional awareness in the early modern era. If you are nostalgic, you are poignantly aware of the sadness of the human condition. Visual media technologies such as photography have perhaps changed the way that we relate to nostalgia. People have always used external things to aid internal recollections of treasured memories, be it by collecting objects that took on nostalgic resonance almost by accident (such as a baby’s first pair of shoes), or carefully crafting objects that preserve the traces of people or places that are far away or lost, such as jewellery made from the hair of the deceased. Photographs give us a way of instantly and deliberately creating nostalgic objects that aid and mediate our memories, with very little effort required.

Susan Sontag observed nostalgia in the way people relate to photographs in 1978.

“All photographs are memento mori. To take a photograph is to participate in another person’s (or thing’s) mortality, vulnerability, mutability. Precisely by slicing out this moment and freezing it, all photographs testify to time’s relentless melt.

As the fascination that photographs exercise is a reminder of death, it is also an invitation to sentimentality. Photographs turn the past into an object of tender regard, scrambling moral distinctions and disarming historical judgments by the generalized pathos of looking into the past.”

Constructing a three-dimensional, dynamic simulation of Yokosuka in the 1980s takes considerably more time and effort than exposing film, so it is not comparable to ‘slicing out this moment and freezing it’, but observing Shenmue’s recreation is similarly nostalgic. Aside from the high degree of visual photorealism, it locates accuracy in processes managed by the software, such as the movements and dialogue of people on the street. It lends reality to the image plane by allowing the player to move into it by teleoperating an on-screen character. In that sense it invokes Sontag’s ‘tender regard’ of a past that was already lost at the time the game was made. Writing in 1980, Roland Barthes offered more clarity on this ‘tender regard’ in reflection on photographs of his recently deceased mother:

“The photograph’s immobility is somehow the result of a perverse confusion between two concepts: the Real and the Live: by attesting that the object has been real, the photograph surreptitiously induces belief that it is alive, because of that delusion which makes us attribute to Reality an absolutely superior, somehow eternal value; but by shifting this reality to the past (“this-has-been”), the photograph suggests that it is already dead.”

The Yokosuka of Shenmue is not a photograph. We know that it was reconstructed in the late 1990s in nostalgic regard of the late 1980s, and carefully designed with gameplay in mind, rather than transcribed from a real-life arrangement of objects and light into the image-plane. Yet the attempt to get as close as possible to photorealism references the emotional significance of the photograph, telling us at once that 1987 Yokosuka may feel real in the game, but it is also entirely lost and completely fictional.