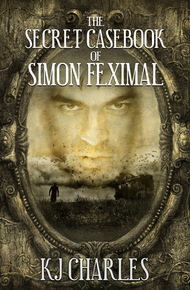 The Secret Casebook of Simon Feximal by KJ Charles

A note to the Editor

I have been Simon Feximal's companion, assistant and chronicler for twenty years now, and during that time my Casebooks of Feximal the Ghost-Hunter have spread the reputation of this most accomplished of ghost-hunters far and wide.

You have asked me often for the tale of our first meeting, and how my association with Feximal came about. I have always declined, because it is a story too private to be truthfully recounted, and a memory too precious to be falsified. But none knows better than I that stories must be told.

So here is it, Henry, a full and accurate account of how I met Simon Feximal, which I shall leave with my solicitor to pass to you after my death.

I dare say it may not be quite what you expect.

I am a sucker for late Victorian mysteries, from Sherlock Holmes to the occult mysteries of William Hope Hodgson and Dion Fortune, but, occasional subtext aside, there's nothing queer about them. KJ Charles takes that familiar form, and makes it entirely and explicitly queer, retelling the cases of occultist Simon Feximal through the pen of his journalist lover, Robert Caldwell — it even begins with the familiar Victorian letter to an invisible editor, explaining that Caldwell is finally going to tell the missing stories that the editor has been asking for, but warning him that the results will not be what he expects. After all, Caldwell has been systematically writing himself out of his own life, removing his presence as lover and full collaborator, and in choosing to write himself back in, he makes the stories unpublishable by the standards of the day. Charles captures that paradox beautifully — this relationship can only exist if it is unspoken, unwritten, unacknowledged, and yet it cannot remain so if the truth is to be told. She also captures the period style, both in the shapes of the stories and the characters' voices, to the point that I found it easy to believe that I was reading an early-20th century manuscript. And — fair warning! — Caldwell's adventures are as creepily terrifying as any of his contemporaries. – Melissa Scott

I am, my friends agree, a fairly easy-going sort of chap, not quick to anger or to fear. Thus, when I came to live in Caldwell Place, I paid no mind to the screams in the night, which could well have been foxes or cats (never mind that they sprang from the empty air of my bedroom). I scarcely objected to the muffled moans, which could have come from a neighbour's pleasures (if the house had not stood alone, with no neighbour for a mile to either side).

But I did feel it was a bit much when the walls began to bleed.

Simon Feximal, ghost-hunter, stood in the imposing entrance hall of Caldwell Place, the ancestral home that I had inherited from my uncle along with a fortune far insufficient to restore the dilapidated property. Mr. Feximal was observing his surroundings. I was observing him.

He was worth the observation. A little above medium height but with very broad shoulders and an erect stance, he held himself like a pugilist. His face was more like that of a priest, albeit not one of any religion practised today. The sort of priest who wielded a sickle, or a ceremonial dagger, I thought: stern, unsmiling, dedicated. He had a beak of a nose, heavy brows over deep-set dark eyes, and a thick head of steel-grey hair, although his face suggested he was not many years older than my own twenty-five.

Mr. Feximal turned, looking around him, brows drawn together.

"Have you inhabited Caldwell Place long, Mr. Caldwell?" His voice was a deliciously deep baritone. I repressed the urge to shiver at the sound.

"Not six weeks," I told him. "I inherited it from my uncle three months ago. The house has stood empty for many years because of its evil reputation. I felt that was an absurd superstition, and I need to sell the place, so I thought I could come and put paid to the nonsense with a bit of nineteenth-century common sense." Both of us looked at the dull brown-red streaks on the wall, where the blood had bubbled, flowed and dried. "I have now decided I was wrong."

Feximal nodded. He had doubtless heard many similar openings to many similar stories. "May I see the portrait?"

I took him into the Blue Drawing-Room, lighting all the candelabras and lamps there. The night had drawn in, and I felt the atmosphere was sufficiently sinister without dark shadows. He stood in the middle of the chamber, slowly turning to take it all in, and once again I seized the chance to observe him, admiring his strong thighs and muscled back. Apparently ghost-hunting kept one in excellent shape.

The room was also worth observing, although less attractive. It was furnished in the style of seventy years ago, and although the dustcovers had been removed and the upholstery cleaned, the stiff-backed chairs were faded and ancient. The parquet floor was bare of rugs. A large, speckled mirror dominated one wall with its heavy gilt frame—I saw Feximal pay particular note to that—and a handful of family portraits hung on the wall opposite. It was one of those that we had come to see, the one whose image had appeared all over the house, etched in shadows, woven in spiderwebs, and finally outlined on the walls in blood. I had taken this to be a hint.