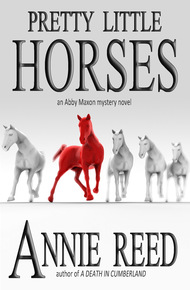 On the Internet, how can you tell?

When private investigator Abby Maxon answers a call for help from an old college friend, she never expects to find herself searching for a missing teenage girl. A pretty fifteen year old who got in over her head playing a flirtatious game of "let's pretend" over the Internet. Abby investigates accidents and tracks down reluctant witnesses for a living. The last thing she wants is to get involved in a missing persons case, especially when that case leads to murder.

Annie Reed's novels and short stories seem deceptively calm, yet they pack an emotional punch that you'll never forget. She has a short story in The Year's Best Crime & Mystery Stories that'll rip your heart out (and make you think hard about a few things), and then she has award-finalist Pretty Little Horses, which takes a hard look at our internet habits. Pretty Little Horses also introduces you to a private investigator you'll want to read more about—Abby Maxon. And if you like Annie's short stories, you'll find a lot more of them in other volumes of Fiction River. – Kristine Kathryn Rusch

The worst part about being a private investigator is learning things I'd rather not know about the people in my life.

Or so I thought.

I've known Jimmy since we were both students at the University of Nevada in Reno more years ago than I care to remember. He was really my ex-husband Ryan's friend, not mine, but in the years since graduation, we'd all stayed in town and stayed in touch.

Reno used to be a small place where you might run into a half dozen people you knew at the mall, an old high school teacher at the grocery store, or an old friend like Jimmy at the movies. Not so much anymore, thanks to the nearly unchecked urban sprawl that saw the town fill the valley and invade the foothills back in the days before the economy went bust. These days, I might run into Jimmy at my daughter's school functions or a soccer tournament. To say I was surprised when he called me out of the blue was an understatement.

Two weeks before Christmas, I had other things I needed to do rather than meet with an old college friend for drinks, but Jimmy wouldn't take no for an answer. He practically begged. In all the years I'd known him, I'd never heard Jimmy beg for anything.

I showed up at Currier's Bar and Grill ten minutes late. Traffic in south Reno this time of year was a bitch. Currier's was a stone's throw from one of the biggest malls in town, and Jimmy wanted to meet at five-thirty. I'd been stuck in stop and go traffic with half the valley. By the time I found a parking spot in Currier's lot, I had the beginning of a decent tension headache. Merry ho ho ho. Maybe I should put a sleigh and flying reindeer on my Christmas list.

Currier's was an upscale, strip mall version of a British pub. Walls paneled in dark walnut, sturdy booths upholstered in burgundy leather, and a long, dark wood bar polished to a mirrored finish. The clientele were mostly young professionals. By the time I got there, the booths and bar stools were filling up with the end of the work day crowd. I guessed not everyone was in the mood for full-body contact Christmas shopping. Either that, or they needed a little fortification before they faced the crowds.

A flat-screen television behind the bar was tuned to ESPN when I walked in. College football. This time of the year, a Wednesday night game meant it had to be an early bowl game named after some corporate sponsor. I didn't look at the teams or the score. I quit following football the day Ryan and I split up. I told myself I didn't miss it.

Jimmy sat hunched in a corner booth nursing a beer. I slid into the booth across from him. I barely said hello before a waitress appeared to take my order.

July or December, I ordered ice tea without a second thought. Ryan drank, so I didn't. One of those husband and wife compromise things. Even though my eighteen-year marriage was over, I hadn't quite come to terms with the idea that I didn't have to plan my life around his anymore.

I declined anything off the Happy Hour menu. This wasn't a social visit. I don't conduct business over a plate of nachos or mozzarella sticks.

Jimmy had peeled most of the label off his bottle of beer while he waited for me. He'd also ignored the chilled glass mug and was drinking directly from the bottle. More than half the beer was gone.

I didn't wait for my ice tea to get down to business. I was tired and my head hurt, and all I really wanted to do was get home to my daughter.

"So," I said. "Want to tell me what's so important we had to meet in person?" I'd wanted to discuss whatever had Jimmy tied in knots over the phone, but he'd refused.

Now that I was here, Jimmy wouldn't meet my eyes. He's a big guy, six four easy–a full foot taller than I am. Like me, he's in his early forties. His sandy blonde hair was starting to thin at the top, his hairline receding beneath a shaggy haircut that hung over his forehead. He was dressed in work casual–a forest green sweater over a lighter green silk polo. A sport coat that looked like tan suede but wasn't hung on the hook at the side of the booth. Jimmy worked in commercial real estate sales, but he wasn't a glad-hander like a lot of salespeople I knew. When Jimmy smiled at you, it was with genuine pleasure, and when he shook your hand, it was with a firm grip. Right now he looked like he wanted to fade into the woodwork and disappear.

That much was obvious. I could have asked what kind of trouble, but I've learned over the years that people need to tell their stories their own way and in their own sweet time.

Listening was half of what my business was about. Most people would tell you about themselves if you gave them half a chance. Or they'd tell me anyway. Strangers struck up conversations with me in a grocery store or in line waiting for an open teller window at the bank. Ryan used to tell me it was because I had a non-threatening look. I thought it was because I couldn't tell people no. Abby Maxon, woman of marshmallow.

The waitress brought my tea. I stirred in a packet of the blue stuff, and Jimmy started talking again.

"You heard about the girl who disappeared, right?" Jimmy said.

It wasn't really a question. I tasted the tea, grimaced, and ripped open another packet of fake sugar. My spoon clinked against the glass and ice cubes as I stirred.

I'd heard about Rachel. The local news had carried the story for the last two days. She'd disappeared on Monday. According to the broadcasts, Rachel didn't show when her mother went to pick her up after school. When Rachel didn't come home that night, her mother reported her missing.

As a mother of a teenage daughter, I paid attention whenever a teenager turned up missing. Kind of like passing a wreck on the freeway and thanking your lucky stars it wasn't you, and hoping like hell it wasn't someone you knew.

He knew her? "Was she one of the kids you coached?"

Jimmy destroyed the rest of the label off his beer instead of answering me.

A loud group of business suit types poured themselves into the booth behind Jimmy. Men in their mid-twenties, clean-cut in uniform white shirts and expensive ties, their conversation pegged them as lawyers. Probably associates at one of the large law firms downtown. I didn't recognize any of them.

Most of my workload involved accident investigations for lawyers and insurance companies. Sometimes I did a little process service or tracked down deadbeat judgment debtors. The work wasn't glamorous or exciting, but I was good at it. It paid the mortgage on the house Samantha and I still lived in, and the rent on the small office I shared with a freelance writer in one of the renovated mansions downtown near the Truckee River. The writer worked nights; I worked days. We rarely saw each other, which worked out just fine. Both our jobs were solitary professions.

Jimmy glanced over his shoulder at the young lawyers. When he looked back at me, he seemed to hunch in on himself. He lowered his voice so only I could hear him. "The cops are going to come after me," he said.

I quit stirring my tea. "You have something to do with her disappearance?"

"No!" Jimmy looked around to see if anyone had heard him besides me, then he lowered his voice again. "No, I don't. But they're going to think I did."