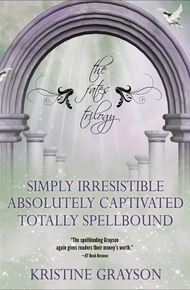 The Fates Trilogy by Kristine Grayson

The Fates, who are in charge of True Love, anger Zeus—who hates True Love. Love has never worked for him. So he decides to depose them and put his teenage daughters in charge. That puts love—and life—in jeopardy. And it's up to the Kineally siblings to rescue them.

The Kineallys all have magic but don't realize it, at least at first. They think they're pretty normal—a comic book collector, an accountant, and a psychologist. But they're not normal. Neither are their heroic love interests. Together, they must save the Fates and find love, one couple at a time.

Okay. I have a quirky sense of humor. And back when I started writing the Kristine Grayson books (yes, she's me), my publisher worried that my usual readers would get confused. So Kristine Grayson was born. Her motto? It's not easy to get a fairytale ending. These three books reference fairytales and Greek myths and obese dogs. Even a few cats. And comic books. The books make me smile. I hope they'll make you smile as well. – Kristine Kathryn Rusch

I have no idea who started the romance trilogy. Nora Roberts? Harlequin? Some writer I've never read? Whoever it was is directly responsible for these three novels. Because I'm a romance reader first and a writer second, and I love romance trilogies. I love seeing how the three people in the trilogy find their true love.

Sometimes all three are friends. Sometimes they're rivals. Most often, however, they're siblings. In my first three novels, Utterly Charming, Thoroughly Kissed, and Completely Smitten, they're—well, not friends, exactly, but intertwined.

Interwoven in those books are three other characters, The Fates. In Greek mythology, they're quite powerful. Clotho spins the thread of life; Atropos cuts that thread at death; and Lachesis gives each person a destiny.

In Grayson mythology, they're both more and less than that. They are in charge of all the magical, and they do assign destiny. They're also judge, jury and executioner. But they're nutty, and they finish each other's thoughts. In fact, they speak in a particular order and never vary from it.

I thought (briefly) of writing their romance trilogy, and then decided that I'm just not up to writing about women who do everything together. I worried that the unity might also involve their romances. I like writing off-beat stuff, but these novels are sweet romances (meaning they have little or no sex on stage) and dealing with continual threesomes—make that six-somes—really isn't what the Grayson romances are all about.

However, the Fates, who are in charge of True Love, anger Zeus—who hates True Love. Love has never worked for him. So he decides to depose them and put his teenage daughters in charge. That puts love—and life—in jeopardy.

I figured I could write that. Someone needed to rescue the Fates. And that someone—well, those someones—belong to the Kinneally family.

Yep, I decided to do a traditional romance trilogy about a nontraditional group of people. The Kinneallys all have magic but don't realize it, at least at first. They think they're pretty normal—a comic book collector, an accountant, and a psychologist. But they're not normal.

Neither are their love interests.

Because, as I thought about who might rescue the Fates, I defaulted. My childhood heroes came from comic books, so our first rescuer is the person on whom Siegel and Shuster based Superman. Not Superman, but his template.

Don't worry: he's not an alien. But he is magical. And he got in trouble with the Fates long ago. Writers aren't supposed to have a favorite hero, but he's one of mine. I'd be happy to meet Dexter Grant on my darkest day; I know he'd rescue me in a heartbeat.

Of course, he wouldn't notice me. He only has eyes for Vivian Kinneally, who has just moved to Portland, Oregon, where he lives. The Fates find Vivian, hoping she can help them. She doesn't even know who they are. So they send her to Dexter. He knows them, and hates them…and that's only the beginning of Simply Irresistible.

In Absolutely Captivated, Travers Kinneally and his son Kyle need to transport the Fates to the next part of their journey. Like all people in trouble in American fiction, the Fates need the help of a good private eye. Travers expects to drop the Fates off at Zoe Sinclair's office; instead, he falls in love.

(I have to say, my favorite character in this novel isn't human. It's Bartholomew, the dachshund with dreams of grandeur. Sometimes I have no idea where my brain will take me.)

The final hero the Fates need is the oldest of the group. Who better to steal from the rich and give to the poor than the oldest thief/hero of all time, Robin Hood? Only no one can go through life these days being called Robin Hood. Although the name Rob Chapeau should probably be a bit of a clue. This man's been mourning his true love for centuries. He truly needs to talk to someone about it, and that someone is Megan Kineally. But Megan, a psychologist, won't take him on as a client because of the attraction between them.

Not that he wants therapy. She's gets involved in the mess with the Fates because her nephew Kyle asks for her help. The fact that she falls in love along the way is a bonus.

Those are only some of the events in Totally Spellbound. I can't tell you what's happening to the Fates there because that would be spoilery, and that's the last thing you want from an introduction into three books about the Fates.

And dachshunds with dreams of grandeur.

I wrote these three books as a unit. I'm glad you get a chance to read them that way.