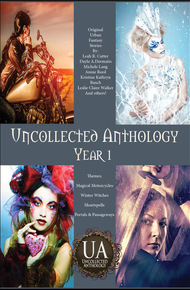 uncollected: not collected or gathered together

oxymoron: a combination of words that have opposite or very different meanings

The Uncollected Anthology series is indeed an oxymoron. Sprung from the minds of seven fabulous authors who love fantasy, short stories, and each other's writing, the series' main goal is to bring you quality urban fantasy fiction.

Every three months, the authors pick a theme and write a short story for that theme. But instead of bundling the stories together, they each sell their own stories. No muss, no fuss—you can buy one story, or you can buy them all. (We'll be honest: we hope you buy them all!)

Uncollected Anthology: When you can't get enough of the stories you love.

Together for the first time! Get all 21 stories from Year 1 of Uncollected Anthology (UA): the quarterly short fiction collection that redefines the boundaries of urban & contemporary fantasy. Whether a long time reader or brand new to the UA story experience, this collection is a must-have for fantasy lovers.

The Year 1 genre-stretching story themes include:

When Dayle Dermatis came up with the Uncollected Anthology, the idea was that a group of authors would write on the same theme and the stories would be sold separately. Then the readers weighed in. They wanted a collected version of the Uncollected. So, now, each volume gets collected twice—once when it comes out, and at the end of every year. I'd love to say I've read every story in this collection, but I haven't. I've read most of them, and loved them all. Read these stories and meet some of the best writers I know. – Kristine Kathryn Rusch

Welcome to the first annual collected Uncollected Anthology. Or something like that.

When we started Uncollected Anthology, we described it as an oxymoron: an anthology, by definition, is a collection of stories, but our issues were uncollected.

I'll explain. But first, a bit of backstory.

When I was growing up, I was the only hardcore reader in my family. Nobody really got my obsession with books or my voracious reading habits. For most of the year, the school library fed my addiction; in 4th through 6th grade, I had special dispensation to check out more books than anyone else each week, because they knew I'd bring them all back. And I would've read each book at least once.

Summers were harder, though. We lived between two towns, and I was never able to convince my mother we needed to go to the library every other day. Or even every other week. I had a two-shelf bookcase in my room, and so I re-read and re-re-read what I had: Nancy Drews and Trixie Beldens, and later every fantasy book my allowance would cover.

When we traveled to visit my grandmother, six hours away, I'd pack a small suitcase of books. I lived in fear of running out of things to read. (It's happened. It wasn't pretty.)

Now, back to Uncollected Anthology.

The first germ of an idea for the project niggled into my head while I was attending a workshop on the Oregon Coast. Held annually for a number of years, the workshop required attendees to write stories based on various themes (mostly speculative fiction, but recently it's opened up to crime fiction as well), and a panel of editors would discuss the stories—and buy some of them for the anthologies they were editing. I looked around the room and thought about how I had all these nifty theme ideas—specifically in the urban fantasy side of fiction—and some of my favorite authors were in that room, and surely there must be some way to get them to write stories on my themes so I could read them.

Because, as I've said, there is never enough to read. I may have a house full of books and the library may lend e-books so I don't even have to put on pants and leave the house to check something new out, but there's a teeny-tiny part of me, buried deep in my subconscious, that still fears running out of things to read. And like I said, I loved these authors' works.

It took me two workshops to figure it out. In this glorious new world of independent publishing, getting the stories out into the world wasn't the hitch. The hitch was that I didn't want to be an accountant, and track who was owed what, which would be required if we put out anthologies ourselves. Then came the light bulb moment: we'd each publish our own stories ourselves, but brand the themed issues like anthologies.

See? Anthologies, but uncollected. It makes my perverse little rule-breaking self happy.

Of the seven authors I asked, all were excited to join. As I write this introduction to the first collected volume, we're solidly into Year three, and we've had some team changes, as some members left and others came on board. The first meeting was a joy, as everyone brought their own strengths to the table, brainstormed ideas, and took the seed of the idea and grew it into the blossoming thing you see before you today.

I had theme ideas, yes, but so did everyone else. We probably have enough themes for the next twenty years (we should be so lucky!). Somehow, after agreeing on quarterly publication, we narrowed the first year down to four themes.

Magical Motorcycles is an idea I'd pitched to an editor some years ago, but it never got o the ground. My husband and I have toured most of the US and a good portion of Europe on motorcycles, so the theme worked well for me, but I wasn't sure if the other writers would be on board. To my surprise, they not only were, they voted to make it the theme of the very first issue. The wildly different stories that were born, even though they were all urban fantasy tales about motorcycles, made it clear this project had wheels.

The second issue would come out during the darker months of the year, so Winter Witches was a clear theme. The title of my own story was one that I'd scribbled down several years earlier, and I knew I had to use it here, even though I didn't know what the story was about until I started writing. Once again, we had a great mix of stories, all perfect to read while drinking hot chocolate or hot buttered rum by the fire.

Heartspells was our first issue of urban fantasy romance tales. I love combining genres and, it turned out, all the other authors did as well—to the point that we decided this would be an annual theme for the February issue. Heartspells also marked our first issue to which we invited a guest author, an experiment so successful we voted to do it for every issue.

When the first thoughts of Uncollected Anthology glimmered in my brain, Portals and Passageways was the theme I had in mind. I adore portal fantasies, and have since I was a wee reader, traveling to Oz and Wonderland and Narnia, so I couldn't wait to read these stories. The wonderful authors didn't disappoint me.

The readers of Uncollected Anthology didn't disappoint me, either—in fact, they keep asking why they have to buy the stories separately, when they want an easy way to read them all. So here it is, what you asked for: the collected Uncollected, Year One. Enjoy.