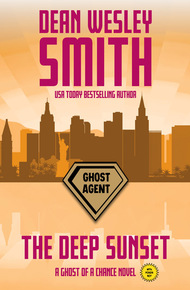 Attorney Gail Kelly dies suddenly on her way to dinner and within minutes meets Dan Carson, aka Sunset.

Dan and Gail and other Ghost Agents must join up with Poker Boy and his team and a bunch of gods to try to save the world just one more time.

USA Today bestselling author Dean Wesley Smith brings you the fifth book in the crazy Ghost of a Chance series.

Dean Wesley Smith has been one of my closest friends in the industry for nearly thirty years. He was the founder of Pulphouse Publishing at the very beginning of the new wave of publishing. He's a visionarry, a businessman, and a writer, too. Dean has developed his career around innovative ways to market and publish a book. He contributed The Deep Sunset to this bundle. Follow his example. – Kevin J. Anderson

PART ONE
A Meet Cute But Dead

You never plan on dying.

Well, at least when you are young you never plan on it.

Gail Kelly sure hadn't. She was twenty-eight, still slim and single, and still very happy in her job as a prosecuting attorney in a small Oregon coastal county. And she was really good at it as well.

So when that chip truck came across the center line on a curve on Highway 101 and hit her before she could even blink, she didn't have time to think about dying then either.

It just happened so fast.

One minute she was driving her wonderful red BMW convertible, headed south to meet some friends for some drinks and dinner, the next she was sitting on the soft hillside next to the highway.

A very friendly woman about Gail's age was kneeling next to her, smiling. And a handsome man stood on the highway, watching. Standing beside him was a short guy dressed in a purple jogging suit who looked completely out of place on the rough Oregon coast.

Both the man and the woman looked comfortable, dressed in jeans and expensive shirts and running shoes.

"Go slow," the woman next to her said.

"So what happened?" Gail asked, trying to look around, but only seeing the three people and the edge of the highway. The pine forest around her and the ocean below seemed to be a blur.

"You were in an accident," the woman said.

Gail looked down at herself, her legs, her arms. Nothing seemed to be bleeding.

She had on a blue silk blouse with a jogging bra under it, jeans, and her best Nike running shoes. There didn't seem to be a mark or scratch anywhere. The road was a good ten feet below her. Why she would have climbed up here was beyond her.

And she felt fine.

Gail stood and the woman helped her up with a gentle touch on her arm. The two of them went down the soft hillside and through a slight ditch to where the handsome man and the guy in purple stood on the pavement.

The good-looking man nodded and smiled slightly at Gail. He had short military-cut brown hair and broad shoulders. Gail could see in his eyes that he was worried about her.

"This is K.J.," Jewel said, indicating the short man with the purple jogging suit. Now that Gail was closer, she could also see that the man's hair was purple and his shoes were purple and he wore purple fingernail polish. Wow, she hoped he wasn't going into any bars along this coast. He didn't fit. In fact, she had a hunch this K.J. person didn't fit anywhere outside of San Francisco.

Gail looked around, trying to focus, but actually not seeing anything but the hill and some trees and the blue of the ocean beyond.

"I must have bumped my head," Gail said. "I'm having trouble focusing."

"That will pass," Jewel said.

"How do you know?" Gail asked staring into the woman's green eyes. "Are you a doctor?"

"Actually, she is," the guy in purple said. "But that's not why it will pass."

"Then why?" Gail asked, slowly starting to get angry.

"Because you're dead, that's why," a voice said from behind her.

She turned to look into the dark brown eyes of the most handsome man she had ever seen. He looked like he had come right out of court and had just taken off his tie. He had perfectly styled brown hair and those large brown eyes were places to get lost in. His dark suit was made of silk, as clearly was his shirt, and he had on expensive shoes Gail was convinced were not sold anywhere in Oregon.

"I'm Dan, but a lot of my friends just call me Sunset."

Gail was convinced those brown eyes of his were seeing right through her. Because of that, it took her a moment to realize what he had said.

The handsome man nodded to Gail, ignoring the guy in purple. "Afraid so. But trust me, you're going to love it."

Sunset smiled at her as he took her elbow and turned her up the road. Suddenly, everything came into clear focus around her.

The evening still had some light as the sun had just set over the ocean. The forest was on her left, the sea down a steep cliff on her right. She could see what was left of her wonderful convertible under the front of a large truck right in the middle of the two-lane highway.

Someone was hosing the entire thing down with a fire extinguisher and a number of others were standing to one side, most with their hands over their mouths.

She could see part of her body twisted in an unnatural way against the grill of the truck. And the truck driver had come about halfway through the window of his truck and was still just hanging there. He looked dead or almost dead.

The sight was so horrific, it took her a moment to realize that was her against the front of the truck.

How could that even be possible?

She turned to face him and her knees started to give out.

Sunset and Jewel caught her and eased her to the ground.

Jewel held Gail's arm and Tommy, her partner had stepped back.

Gail had her head down and was focusing on just breathing. She knew this feeling from having too many drinks and she knew just solid breaths of air would help.

"Not this time," Sunset said.

"Train me to do what?" Gail asked, finally letting the anger come out as she stood. She didn't need any training.

"To be dead and worthwhile," Sunset said, smiling at her.

"How about I be not dead?" Gail said.

"Not really possible," Sunset said, pointing in the direction of the wreck. "It was your time. See the truck driver? It's almost his time as well. Watch."

Sunset turned her toward the wreck again as suddenly the truck driver sort of moved away from the cab of his truck while his body still remained sticking out of the window.

For a moment he seemed perfectly healthy even though his body in the window clearly wasn't.

Then the driver looked upward and sort of floated in the air and after a moment was gone.

"So how come I don't float out of here?" Gail asked. "And get away from you nut-jobs."

She was angry and scared, but mostly angry, and when angry, she pulled no punches.

"The powers-that-be think you would be a good help in saving people," Jewel said, her voice gentle.

"I don't save people," Gail said, her voice stern. "I put people in jail."

"Sometimes that's saving people," Sunset said, smiling at her and clearly ignoring her anger. "You hungry?"

That question surprised her. "I thought you said I was dead."

"Oh, you are," Sunset said. "And from here on out, the food tastes better."

"You are just confusing Gail," Jewel said, stepping up and putting herself between Gail and those amazing brown eyes.

"I did just fine when I died," Sunset said.

Gail glanced over. The little guy in purple clearly had some issues with Sunset.

Sunset was about to say something when Jewel raised her hand. "Not here, not now. You can help in Gail's training, if she wants help, but not until I say so."

Gail was impressed. Jewel clearly was the one in charge here.

Sunset looked at Jewel who clearly wasn't backing down.

Finally he nodded to Jewel and smiled at Gail. "See you soon I hope."

Gail was so confused, all she could do was nod.

Then Sunset just vanished right in front of her eyes.

"I'm having the weirdest damn dream," Gail said, deciding to sit down once again on the pavement.

Jewel helped her down and then looked at K.J. "Find out what that was all about. We'll be at the Golden Nugget having dinner."

K.J. nodded and then the little guy in purple also just vanished.

"I haven't even had a drink yet," Gail said, shaking her head.

Then she looked up at her twisted body against the front of the truck and wondered if she would ever drink again.