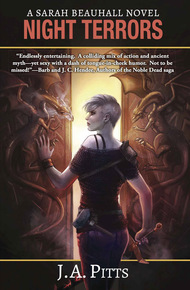 J. A. Pitts is an award-winning author who lives in the Pacific Northwest. In the dead of winter he can be found battling the elusive tree squids in the world's only temperate rainforest.

Magic has a cost. Sarah Beauhall, blacksmith and dragon slayer, just didn't realize how high. Her lover, Katie Cornett, has finally been overwhelmed by this spiraling cost and her spirit is blasted from her body and flung into a world of nightmares and monsters.

As Katie's coma deepens and her chances of survival fade, Sarah's spirit must make a journey of its own, through a world of crystalline eaters and malevolent spirits who exist only to hunt and consume.

Night after night, Sarah delves beyond the hidden paths, going from crystalline landscapes into the wild lands and lost worlds far beyond the great sea of dreams.

When the spirit of a long dead murderer—known only as the Bowler Hat Man—begins gathering an army in the forgotten lands, Sarah discovers that more than eaters and feeders pursue her.

John Pitts has a wonderful series about Sarah Bauhall, urban dragon slalyer. NIGHT TERRORS is the new book in the series, and readers are clamoring for the next installment. John is well known in the Pacific Northwest, and he's nothing at all like his character Sarah! Read the new novel and catch up on all the previous books in the series. – Kevin J. Anderson

Waking up at 3 AM, naked and cold is usually not something that bothered me. Katie was a blanket hog and I tossed and turned enough that I frequently shucked out of the concert shirt I wore to bed.

I rolled over and reached out for Katie, but she wasn't there. I was just trying to get my brain cells to fire in unison when I heard her vomiting in the other room.

That woke me right up. My head was still fuzzy from too little sleep and the couple bottles of wine we'd drunk, but adrenaline has a way of cutting through the haze. I rolled off the nest we had in the living room, hit the light switch, and leaned against the wall next to the bathroom.

Katie was on her hands and knees heaving her guts out into the toilet. I knew that feeling, could sympathize, my own gut churned at the sound of her combined moans and retching.

I grabbed a couple of washcloths off the stack by the sink and ran cold water over them. By the time I had them wrung out, she was sitting back on her heels and had flushed the toilet.

"Here," I said, kneeling beside her and handing her one of the wet rags. She wiped her face with it and leaned against me.

"I'm sorry," she said, her voice nearly a whimper. "I guess the wine didn't agree with me."

I took the wash cloth from her and handed her the second one, which she pressed against her eyes, sighing deeply.

"Oh, you're totally hawt," I drawled, steadying her on her feet. Of course she was white as a sheet. Even her lips had gone grey. She leaned against me as we crossed the few feet back to the living room, she collapsed onto the nest. We hadn't slept in the actual bedroom in months. Too dangerous with the shadow door on the far wall. It was closed for now, but I didn't trust it. I got her settled and pulled the blankets up to her chin. "I'll get you some water."

She smiled, but didn't open her eyes. By the time I got back she was breathing slowly, sound asleep. The color was coming back into her cheeks, though. The clock read three-thirty.

It had been a good day. I'd come home from working with Julie out at a bunch of farms in Redmond and Katie had arranged for Jai Li, our foster daughter, to spend the night at Black Briar. Katie wanted to have a romantic evening, so she insisted on cooking for me while I grabbed a shower.

I set the glass of water on the coffee table by her side and went back into the bathroom. The cloth she'd used to wipe her mouth had traces of blood on it. I closed the toilet and sat on the lid, staring at the bright red of the blood on the cloth.

We'd been to see a few doctors who were all confused by what could be bothering her. Katie thought maybe she was getting an ulcer or something, but I knew better. I think it was the magic. Her songs were growing more powerful since I reforged my sword, Gram and I think they were wrecking her body—eating her up inside. Magic has a price. I was growing more sure the price Katie was paying was her life. Things had been spiraling out of control with her ever since we had fought all those spirits at Samhain.

She was getting weaker, frailer. It was the little things: like when she had to catch her breath after tying her shoes or wringing her hands like she was in pain. She faked it well enough. Didn't think anyone noticed, but I did. I loved her more than breathing.

Our friend and confidant Stuart, one of the Black Briar leaders, had told me how Katie had nearly collapsed while battling the cultists during the winter solstice. Later, her brother Jimmy had found her face down in a pool of her own blood after the battle. She hadn't been physically wounded, but you can lose a lot of blood through a nose bleed. I hated thinking about how close I came to losing her that night. They'd given her two pints of blood and kept her in the hospital overnight. Thing was, she had no real symptoms. They just got her stabilized and suggested she see a specialist.

So, that's exactly what we did. With the help and guidance of Melanie, our doctor friend, we'd seen a series of specialists from infectious disease, to gastroenterology, and finally a neurosurgeon to make sure she wasn't having some sort of seizures or strokes.

We had another appointment later this week just to rule out anything mundane—like cancer or something. I hated it. This would be the fourth specialist visit in as many months. I wasn't dealing with the ambiguity too well. This wasn't something I could stab or punch or hit with a hammer. I couldn't bend it to my will like iron, or wrestle it to the ground like a dwarf. One thing I knew about myself, something I didn't need any shrink to help me figure out, was I did not take well to feeling helpless.

I'd killed a dragon a year ago, hunted the bastard down for taking Katie and my blacksmithing master, Julie. Oh, and killing too many of my friends. But this unknown malady was out of my wheelhouse and I was starting to get a twitch.

The last few days she'd been doing remarkably well. Maybe even turned a corner, or so she claimed. She hadn't had a nose bleed or anything for over a month. Heck, after Christmas we were so busy getting settled in with our foster kidlet—Jai Li—that we hardly had time to kiss each other in passing, much less do anything more strenuous. I kept an eye on her, and had others watching out as well.

Last night she'd been urgent, willing. But I wondered how much I'd overlooked in my own need. The sex had been good, and the evening as a whole was one of the best we'd had in months. Still, it seemed that maybe her health had backslid to where it was a couple of months ago.

I hated how wiped out she looked, even while sleeping; like she was withering away while I watched. It made my heart hurt. Maybe it was time for me to bring in my witch friend, Qindra. She could perform a series of magical tests or something. Hell, I'd gladly get further entrenched with her and the old dragon Nidhogg if it would make Katie healthy.

I sat on the rocker across from our bed and watched her until the sun started to rise. Another day of short sleep rations wouldn't kill me. I just couldn't stop watching her breathe.