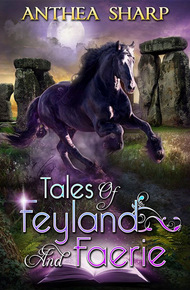 Eight tales of Faerie magic and adventure, spanning the centuries from Ancient Ireland to a near-distant future…

Can music overcome fey magic? When the chieftain's infant son is stolen away by the fey folk of the Bright Court, Maeve Donnelly journeys beneath the faerie hill to save the child. Her only weapon is a simple pennywhistle, and the music running in her bard-gifted blood.

Accused as witch, Eileen must flee for her life, leaving her village and true love behind. With her pursuers closing in, she chances across a strange black horse - but does she dare to pay the price of escape?

Feeyah MacGuire is not very good at being a Brownie—but when she breaks the sacred code of their kind she faces banishment… or worse.

Jeremy Cahill's gifted cello playing calls the creatures of Faerie to him. As a boy, his Irish grandmother crafts him a charm to keep the fair folk at bay—but when it finally fails, Jeremy must face the terrifying power of Faerie…alone.

Jennet Carter never thought hacking into her dad's new epic-fantasy sim-game would be so exciting... or dangerous. Behind the interface, dark forces lie in wait, leading her toward a battle that will test her to her limits and cost her more than she ever imagined.

HOW TO BABYSIT A CHANGELING

When a mortal boy is exchanged for a hideous faerie creature, Marny Fanalua steps up to help her friends in their battle against the Dark Court. *NOTE * The events in this novella occur simultaneously with Feyland: The Twilight Kingdom. Reading the complete Feyland Trilogy first is recommended if you would like to avoid spoilers.

When a faerie girl is sent on a mission to the mortal world, she must learn to navigate the intricacies of life among humans - but will she survive undetected? *NOTE* This story falls in between Spark and Royal in the Feyguard books, but it can be read as a stand-alone without spoiling anything.

Growing up on fairy tales and computer games, USA Today bestselling author Anthea Sharp has melded the two in her award-winning Feyland series. These eight tales of Faerie magic and adventure, span the centuries from Ancient Ireland to a near-distant future. – Allyson Longueira

The faerie maid arrived in a bubble of cold blue light, a barrier between herself and the dangers of the mortal world. Before she could take a breath the magic dissipated, revealing crumbling structures and pitted pavement beneath a dimly lit sky. She shivered as the clammy air pressed against her skin. It seemed to be night, though there was no moon to guide her, no pinpricks of stars shining steady overhead.

The air smelled wrong, tainted with rot and strange metallic fumes. The light was peculiar too, an orange wash smeared across the clouds. But the sounds were the most foreign things: monstrous growls approaching and receding, mortal voices raised in shouts of fear or anger, the rushing pulse of something too mechanical to be waves pushing against the shore.

In one hand she clutched a silver medallion inset with a moonstone, the chain trickling through her fingers. More than a talisman, it was a means to return back to the enchanted world from which she had come. Precious beyond words.

She had arrived with a reason, a geas set upon her. And she must remember…

Blinking, she tried to recall it. Her human name, which once she had worn as easily as a woolen shawl wrapped about her shoulders. Once—before she had plunged into the Realm of Faerie and lost all need for human things.

The sound of her name slipped through the shadows of her memory, an elusive silver fish, darting away. She pressed her lips together, trying to recall the shape of it.

Brea. That had been her name.

She whispered it softly, reclaiming the taste of it in her mouth. She was Brea, now, no longer a moonbeam swimming beneath the waters. And along with the awkward syllables, she now wore an equally clumsy form.

She stood unsteadily on her two human legs and tried to quell the nervousness prickling through her. The wrongness of this world made her heart beat fast, her gossamer garment no protection from the night. Every instinct shouted at her to flee, to flick her tail and dart to the concealing coolness of the deep shadows.

Yet even if there had been a sheltering pool nearby, she was trapped in this mortal shape. There would be no tail, no fins, no undulating through the bright waters. Not until she completed her quest and was allowed to return home to the Realm of Faerie.

Ah, but she was so weak compared to most members of the Dark Court. Their mocking words still echoed in her thoughts.

"That one?" The black-mouthed banshee had shrieked with glee. "She'll not last a day in the human world!"

"Aye, she'll be eaten in a trice." One of the redcap goblins licked his lips, then bared his needle-sharp teeth. "Maybe I'll follow her in and do the job."

"No need," a fungal-covered hooligan sneered. "She'll return defeated by the next moon, mark my words. Then the queen might give her to you as a plaything."

The Dark Queen's cold voice had cut through the babble. "This maid betrayed the Realm, and must pay the price. Whether she succeeds or not, I lay this geas upon her. Should she fail, she shall be banished to walk the Shadowlands forever."

The court had tittered at the queen's words. Their bright, avid gazes had fixed on Brea, anticipating her disgraceful return, ready to revel in the crushing bitterness of her failure.

She must not fail.

Though she might have been fully mortal once, was she not now a creature of the Realm? She had a few small magics to call upon, paltry though they might be. Lifting her face to the absent moon, she prayed they would be enough.

She was alone and afraid, but she would not let this strange new place defeat her. Brea pulled in a breath of tainted air, trying not to cough at the sour taste. First, she must find a safe haven. Once hidden, she could begin to explore this city of the humans, fortify herself, and discover a way to fulfill the queen's commands.