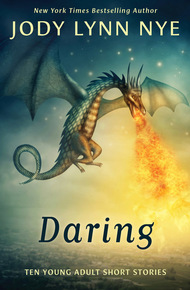 Daring is a collection of fantasy and science fiction stories from New York Times bestselling author Jody Lynn Nye. Each story is a small world of its own, ranging from flat-out farce featuring self-rescuing princesses in "Don't Break the Chain," to the fears of young mutants being deported from Earth on a faulty spaceship, in "Rite of Passage," to "Mything in Dreamland," featuring Skeeve and Aahz from Robert Asprin's beloved Myth-Adventures. Teen readers will be able to see themselves in the young heroes who pull themselves out of hopeless situations again and again, through humor, drama and adventure.

I am honored that New York Times bestselling author Jody Lynn Nye assembled this collection of fantastic short stories to debut in this bundle. Ranging from a humorous vampire story to King Arthur on the battlefield to young princesses rescuing a prince, this collection features an entertaining group of young adult protagonists. – Allyson Longueira

From "The Stuff of Legends"

Duffy paid no attention to the kender's protests. He'd been interrupted in the middle of hearing his favorite legend — just as they were getting to the battle. The pleasant rapture of imagination was broken, as thoroughly as if he'd had a bucket of water dashed in his face. At the very least, Duffy wanted the source of his discomfiture out and gone. One of the other patrons of the pub opened the door for them, and he carried the kicking kender out into the moonlit night.

He swallowed and tried again.

"That's a dragon, isn't it?" the kender asked brightly, swinging from his right hand. "My, a well-grown specimen it is too. Its tail goes clear around the building and comes back again. I didn't know dragons slept like that, did you? Oof!"

Duffy dropped the gnome-creature on the ground and scrambled back into the pub.

"There's a dragon out there!" he bawled.