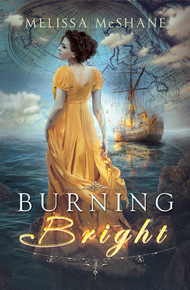 Melissa grew up a nomad, finally settling in Utah, though her heart belongs to the Oregon coast. Her love of reading fantasy stories has been a constant in her life and she still remembers the places she lived by the books she was reading there: the Riddle-Master trilogy in New York, the Foundation series in Colorado, Howl's Moving Castle in Texas, Crown Duel in Utah.

That love of reading grew into a love of writing, first critical essays and reviews, then fiction. She also loves roleplaying games, in which she usually plays the rogue. This probably says something about her personality better left unexplored. Her family includes her husband (a long-suffering man willing to let ideas bounce off him at speed), four children (also long-suffering and happy to live off macaroni and cheese while Mom writes) and three very needy cats, one of whom is so dumb he frequently runs into walls.

In 1812, Elinor Pembroke wakes to find her bedchamber in flames—and extinguishes them with a thought. At 21, she is old to manifest magical talent, but the evidence is unmistakable: she not only has the ability to start fires, but the far more powerful ability to control and extinguish them. She is an Extraordinary, and the only one in England capable of wielding fire in over one hundred years.

As an Extraordinary, she is respected and feared, but to her father, she represents power and prestige for himself. Mr. Pembroke, having spent his life studying magic, is determined to control Elinor and her talent by forcing her to marry where he chooses, a marriage that will produce even more powerful offspring. Trapped between the choices of a loveless marriage or living penniless and dependent on her parents, Elinor takes a third path: she defies tradition and society to join the Royal Navy.

Assigned to serve under Captain Miles Ramsay aboard the frigate Athena, she turns her fiery talent on England's enemies, French privateers and vicious pirates preying on English ships in the Caribbean. At first feared by her shipmates, a growing number of victories make her truly part of Athena's crew and bring her joy in her fire. But as her power grows and changes in unexpected ways, Elinor's ability to control it is challenged. She may have the power to destroy her enemies utterly—but could it be at the cost of her own life?

Melissa McShane offers up a protagonist after my own heart in Burning Bright. Set in 1812, Elinor Pembroke finds herself trapped between the choices of a loveless marriage or living penniless and dependent on her parents, and so she takes a third path: she defies tradition and society to join the Royal Navy. And that's just the start of this series about an Extraordinary young woman. – Allyson Longueira

Elinor dreamed of fire, the unseen ground beneath her burning and the air white with heat, and woke to find her dream a reality. The walls of her bedroom were ablaze, the varnished floorboards slightly less so, and fire rolled across the ceiling in golden waves. Heat struck at her with an intensity that dried her nostrils and mouth and made her eyes feel roasted. She felt no fear, merely sat with her arms around her knees, her white, flannel nightgown tucked over her feet, and marveled at the fire's power and beauty. She had never seen such color. It made every memory she had of this dismal room seem even more faded and dispirited. Then the heat battered at her again, and she realized she would die if she did nothing.

So she reached out from within herself, and extinguished it.

It vanished between one heartbeat and the next, leaving behind the cold ash and charred beams of a long-dead fire. Patches of wallpaper here and there lent a leprous look to the walls. She heard screaming from somewhere nearby; that, and the void left by the fire's howl, filled her ears with a dull ringing sound. I believe this is the strangest dream I have ever had, she thought. She blinked to moisten her eyes, inhaled the dusty, acrid smell of wood smoke, and knew she was not dreaming.

"Elinor!" Her mother, her long braid of greying hair bobbing behind her, ran as far as the doorway and stopped short. Her full-lipped mouth dropped open into a perfect oval. "What foolish thing have you done now?" She held a candle at arm's length and peered into the bedroom, throwing shaky, grey shadows over the grey and black char as her hand trembled. Behind her, Elinor's younger sister Amelia hovered, her eyes sleepy.

Elinor looked around the room. The thick yellow curtains were burned at the edges and in irregular spots, but otherwise intact; the rumpled sheets of the bed where she sat were speckled with ash, and black stripes of char streaked the bedposts and the carved walnut footboard. "It was a fire," she said, boldly, unable to give her mother a truer answer either of them would understand.

"A fire? However did you manage that?" her mother exclaimed.

"Come, mama, is it not obvious? Elinor has finally developed talent," said Amelia, taller and slenderer than Elinor and impossibly beautiful even in her sleep-disheveled state. She put a delicate hand over her mouth and coughed rather dramatically. "I suppose it is to be expected she should manifest as something so dreadfully vulgar as a Scorcher."

"And your Shaping yourself to fit the current fashion in beauty is not itself vulgar?" Elinor snapped.

"For shame, Elinor. And it's nonsense. You are far too old to manifest."

"I agree," said a deeper voice, and the two women made way for Josiah Pembroke. He was magnificent even in nightcap and gown with his feet shod in slippers embroidered with purple and gold flowers. "And yet this is unmistakable. Have you been concealing things from me, daughter?" He crossed the room to stand a few feet from her, his feet kicking up puffs of ash where he trod, his hands clasped over the expanse of his belly.

Elinor met his eyes with a calm directness that concealed the discomfort and fear she always felt when her father brought his attention to bear on her. She brushed ash from her nightgown and resisted the urge to take her braid in her hand, like a child clinging to a parent for comfort. "I have not," she said. "I dreamed of fire and woke to find it real. I would not conceal such a thing even were it possible." She did not for a moment consider pretending the fire had some natural origin; she knew in her bones that it was her fire, that she had created it, and it both loved her and would have killed her had she not subdued it.

Her father examined her with those dark grey eyes that looked black in the flickering lamp light. "Then tell me, if you would be so kind," he said, "did the fire extinguish itself?"

Elinor shook her head. "It was I who did it," she said.

Her father walked toward the window, drumming his fingers on his arm, then reached out to rub a blackened fold of the curtain between his thumb and forefinger. When he turned back to regard her, he was smiling, and Elinor's calm, expressionless demeanor cracked at the edges, because it was the smile of a predator. "Not only a talent," he said, "but an Extraordinary one. Do you see the possibilities, daughter?"

Elinor shook her head, though now that he had suggested there were possibilities, she could not help but try to imagine what they might be.

Mr. Pembroke's smile broadened. "In time, I think you will," he said.