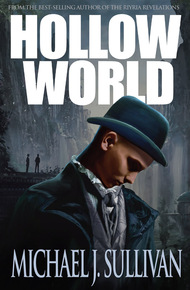 After finding a manual typewriter in the basement of a friend's house, Michael inserted a blank piece of paper and typed: It was a dark and stormy night and a shot rang out. He was just eight years old at the time, so we'll forgive the use of that overused opening. But the desire to fill the blank page and see what doors the typewriter keys would unlock wouldn't let him go. For ten years Michael developed his craft by studying authors such as Stephen King, Ernest Hemingway, and John Steinbeck...just to name a few. During that time he wrote twelve novels, and after finding no traction in publishing, he quit and vowed never to write creatively again.

Michael discovered that never is a very long time, and he ended his hiatus from writing after a decade. The itch returned when he decided to create a series of books for his then thirteen-year-old daughter, who was struggling in school due to dyslexia. The result is his lucky thirteenth novel was the one finally made him an overnight success.

Today, Michael continues to fill blank pages and is working on the third book in a four-book series tentatively titled The First Empire (traditional fantasy).

THE FUTURE IS COMING...FOR SOME SOONER THAN OTHERS

Ellis Rogers is an ordinary man who is about to embark on an extraordinary journey. All his life he has played it safe and done the right thing, but faced with a terminal illness he's willing to take an insane gamble. He's built a time machine in his garage, and if it works, he'll face a world that challenges his understanding of what it means to be human, what it takes to love, and the cost of paradise. Ellis could find more than a cure for his illness; he might find what everyone has been searching for since time began...but only if he can survive Hollow World.

Welcome to the future and a new science fiction thriller from the bestselling author of The Riyria Revelations.

"Best of" and "Most Anticipated" Lists which include Hollow World

Michael is one of the few authors who has successfully published through all three routes: small press, self, and big five. Some key accomplishments include: being named to io9's Most Successful Self-Published Sci-Fi and Fantasy authors, selling more than 450,000 copies, being translated to fifteen languages, spending more than a year on Amazon's Bestselling Fantasy Author's list and appearing on more than 80 "best of" or "most anticipated" lists including:

"Michael J. Sullivan is one of the shining examples of an author with a new business model 'doing it right'. I found out last April via GoodReads that he was kickstarting a new novel, and after he had raised over 10 times his goal, I was treated to Hollow World. The story typifies my eclectic taste as Michael describes, '... mixing elements of science fiction, fantasy, adventure, mystery and thrillers. – Kriana

RUNNING OUT OF TIME

When she said he was dying, and explained how little time he had left, Ellis Rogers laughed. Not a normal response—the doctor knew it, Ellis did too. He wasn't crazy; at least he didn't think so, but how does anyone really know? He should have seen visions, flashes from his life: kissing Peggy at the altar, graduating college, or the death of their son, Isley. He should have fixated on all of the things that he'd never done, the words he had spoken, or the ones he hadn't. Instead, Ellis focused on the four-letter word the doctor had said. Funny that she used that word—he never told her what was in his garage.

The pulmonary specialist was a small Indian woman with bright, alert eyes and a clipboard that she frequently looked to for reference. She wore the familiar white lab coat—stethoscope stuffed deep in one pocket. She sat, or more accurately leaned, against the front of her desk as she spoke. At the start of her speech, the doctor had begun with a determined, sympathetic resolve, but that train had been derailed by his inappropriate outburst, and neither of them seemed to know what to do next.

"First test I ever failed," he said, trying to explain himself, hoping she'd swallow it and move on. Given the news she had just delivered, he deserved a little slack.

The doctor stared at him concerned for a moment, then settled back into her professional tone. "You should probably get another opinion, Ellis." She used his first name as if they were old friends, though he'd only seen her the few times it had taken to get the tests performed.

"Is someone working on a cure for this?" Ellis asked.

The doctor sighed, keeping her lips firm. She folded her arms, then unfolded them and leaned forward. "Yes, but I honestly don't think anyone is close to a breakthrough." She looked at him with sad eyes. "You just don't have that much time."

There was that word again.

He didn't laugh, but he might have smiled. He needed a better poker face. Ellis shifted his sight away from her and instead focused on three jars sitting on a counter near the door. They looked like they belonged in a kitchen—except that these contained tongue depressors and cotton swabs instead of sugar and flour. He couldn't tell what was in the last one. Something individually packaged, syringes, maybe, which reminded him to double-check the first-aid kit to make sure it had a good supply of aspirin. Not all of them did.

The doctor probably expected him to cry or maybe fly into a rage cursing God, bad luck, the industrial food complex, or his own refusal to exercise. Laughter and smiles weren't on that menu. But he couldn't help being amused, not when the doctor was unwittingly making jokes.

No, he thought, not jokes—suggestions. And she's right, there's nothing stopping me anymore.

He was dying from idiopathic pulmonary fibrosis and she had given him six months to a year. The to a year portion of that sentence felt tacked on in an overly optimistic manner. Anyone else might have focused on that part of the equation—the dying part—and thought about trips to Europe, safaris in Africa, or visiting neglected friends and family. Ellis was planning a trip of a different sort and began running a mental checklist. He already had most everything. Flashlight batteries, he should get more of them—can't ever have too many batteries—and some more M&M'S, why the hell not? It wasn't like he had to worry about his weight, diabetes, or tooth decay. I'll buy a whole box! The peanut ones, the yellow bags are always the best.

"I'm going to set up an appointment for you to come back. Two weeks should give you enough time to see someone else and have the tests repeated." She stopped writing and stared at him with her big brown eyes. "Are you sure you're all right?"

"Is there someone I can call?" She flipped through the pages on the clipboard again. "Your wife?"

He was surprised to realize he was telling the truth. The last time he felt that way was thirty-six years ago when he had sat across from the loan officer's desk and learned he'd qualified for the mortgage that allowed him to move out of his parent's home. Fear mingled with the excitement of facing the unknown. Freedom—real freedom—had all the rush of an illegal drug.

I can finally press the button.

She waited a beat or two longer, then nodded. "Assuming your second opinion concurs with mine, I will add your name to the registry for a transplant, and I'll explain the process in detail at your appointment. Aside from that, I'm afraid there's nothing else we can do. I'm really very sorry." Reaching out she took his hand. "I really am."

He nodded and gave a slight squeeze. Her smile appeared less forced then. Maybe she was thinking she'd made him feel better, made some emotional connection. That was good, he needed all the karma he could get.