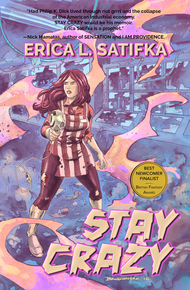 Erica L. Satifka is a writer and/or friendly artificial construct, forged in a heady mix of iced coffee and sarcasm. She enjoys rainy days, questioning reality, ignoring her to-do list, and adding to her collection of tattoos. Her British Fantasy Award-winning debut novel Stay Crazy was released in August 2016 by Apex Publications, and her short fiction has appeared in Clarkesworld, Shimmer, Interzone, and The Dark. She lives in Portland, Oregon with her spouse Rob and an indeterminate number of cats.

After a breakdown at college landed Emmeline Kalberg in a mental hospital, she's struggling to get her life on track. She's back in her hometown and everyone knows she's crazy, but the twelve pills she takes every day keep her anxiety and paranoia in check. So when a voice that calls itself Escodex begins talking to Em from a box of frozen chicken nuggets, she's sure that it's real and not another hallucination. Well … pretty sure.

An evil entity is taking over the employees of Savertown USA, sucking out their energy so it can break into Escodex's dimension. Escodex needs Em's help to save his dimension and to keep hers from collapsing. But Em isn't certain she wants to help Escodex. She has other things to worry about, like staying off the Savertown USA bowling team, busting her sister's chops about her newfound religion, and getting out of Clear Falls, PA.

When her coworkers start mysteriously dying, Em realizes that she may be the only one who can stop things from getting worse. Now she must convince her therapist she's not having a relapse and keep her boss from firing her. All while getting her coworker Roger to help enact the plans Escodex conveys to her though the RFID chips in the Savertown USA products. It's enough to make anyone Stay Crazy.

The overhead fluorescents of the Clear Falls Savertown USA hummed like the whirring of intelligent insects burrowing their way into Em's brain. The walls blazed with thick red, white, and blue stripes. Giant decals printed like cobblestones clung to the floor. Street signs, marked with names like "Electronics Terrace" and "Maternity Lane," sprouted where two footpaths intersected. Pop country droned from the overhead loudspeakers.

"I won't have to try to blow it. That just happens."

At the back of the store, a glassy-eyed worker with a bleached-blond perm sat reading a romance novel. "Hello, my name is Bea Kalberg. My daughter Emmeline would like to see the manager about a job."

The woman looked up at Em's mom, then at Em. She then returned to her reading.

"I called earlier today. The manager said we could go in and talk to him personally."

Without looking back up at Em or her mom, the woman picked up the intercom. "Mr. Pendleton, there's some people here who say they need to talk to you."

"Send them in," a scratchy voice said.

The woman absently gestured toward the "Employees Only" door. The office was walled in clear plastic, presumably so the boss could keep a close eye on his employees as they mingled in the lounge directly within sight. The man inside — Pendleton, Em guessed — unhooked the latch to the door and gestured Em and her mother inside.

Em felt fingers digging into her back like a cattle prod. "My daughter wants a job here."

"Is that so?" Mr. Pendleton was a slight man, who wore perfectly round glasses and a shirt buttoned all the way up to the top of his neck. "Are you sixteen?"

"You ever work in retail before?"

Pendleton gave her a hard look. "This is a serious business. We are all very dedicated here at Savertown USA. Dedicated to business. If you don't want to work hard, we don't need you."

Em tried to look into Pendleton's eyes, but the overhead lights conspired with the glasses to block them out, creating two small suns. "I'm dedicated to business."

"We have an opening in the frozen food section for a stock person. Part time."

Em couldn't stop staring at his glasses. The reflection was mesmerizing; it completely distracted her from whatever Pendleton was saying. She stared at the two white orbs until she felt her mother's elbow in her side. "Okay?"

Pendleton held out his hand. It was hairy and covered with scabs. "Welcome aboard."

A thin black woman with a crooked smile fitted Em for a red, white, and blue Savertown USA vest. It made swishing noises when Em moved her arms, and the cheap fabric seemed designed to never smooth out completely. Somewhere along the line, she was given a nametag with "Emma" written on it.

The woman squinted, then affixed a "final markdown" price tag sticker over the last two letters. "There. It's perfect."

An elderly man sat her down at a desk and popped a DVD into a nearby player. Somehow she didn't think it would be a rerun of Gilligan's Island.

"You have to watch this. It's about the company. We all had to watch it." He turned down the overhead lights.

The video opened with an exterior shot of a Savertown USA store. Generic music played over the image, and the camera zoomed into the store. A pleasant narrative voice kicked in.

"Savertown USA Stores Incorporated was founded in the spring of 1982 by William St. George, a humble grocer from Lexington, Kentucky. Mr. St. George had one goal in his life: to provide affordable products to American consumers in a clean, well-organized environment, where they could get all their shopping done in one convenient location."

The narrator rambled on and on about the achievements of William St. George: about how he was the youngest self-made person to make the Fortune 500 list, about how he had gone through a string of three wives before becoming born again. The narration was underscored with photographs and artists' renderings of St. George as he progressed through life. The discussion of William St. George ended at his death, which had occurred at the tragic age of fifty-seven during a rock-climbing expedition.

Em had stopped watching the film long before St. George's demise. She instead traced the pattern of the fake wooden desktop with her fingers while humming a song.

"At Savertown USA, we respect the ideals of William St. George every day when we price our goods. We believe, as he did, that family is the most precious thing in America today, and we are dedicated to bringing the American family the very best in products and services at prices they can afford. So, new employee, as you prepare to embark on a fulfilling, rewarding career with Savertown USA Stores Incorporated, remember that your number one goal must always be customer satisfaction. Nothing is more important than the happiness of our customers. Because our customers are America, and America is —"

A scream sounded. A flash of light shot from the television, narrowly missing Em's eyes. When she looked back at the television, the afterimage of a complex mathematical formula filled the screen.

The overhead light came on. "Enjoy the movie?"

It was the man who had put the video on. Em looked him over. He didn't hear the scream, she thought, or see what I saw. He can't see it even now. I must be hallucinating. Did I take my meds today?

"Well, that's all you have to do today. You don't start work until tomorrow." He ejected the DVD and put it back in its protective sleeve. "Are you okay? You look a little sick."

"Must be the flu. Don't touch me, it's catching." Em tucked her vest and name badge under her arm and dashed through the little fake village to the parking lot, where her mother was waiting with a full trunk of groceries.

"How did it go?" her mother asked.

"It was fine. Totally fine."

"Look, I know if I'm fine or not, okay? Just drive." Em leaned back in her seat and closed her eyes. Just a hallucination.