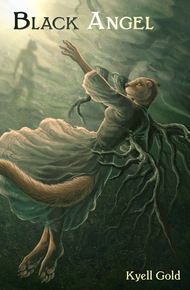 Kyell Gold has written over twenty novels and novellas, best known for his treatment of gay characters and relationships. He helped create RAWR, the first residential furry writing workshop, and has instructed at both of its sessions through 2017.

He lives in California and loves to travel and dine out with his husband Kit Silver, and can be seen at furry conventions around the world. More information about him and his books is available at http://www.kyellgold.com.

Meg was put on antidepressants through high school after a spirit told her to commit suicide. Now that she knows spirits aren't real, she's off them so she can make a living illustrating other people's fantasies. But as one of her roommates heads to college and another is getting serious about his relationship, her own life is stagnating. Left alone for a weekend, she decides to work on a personal art project, a comic about a young girl facing marriage in bayou country.

Then the girl in the comic speaks to her, and Meg dreams of another girl, trapped in a Christian cult. The prospect of seeing spirits again stresses her so much that she calls a would-be boyfriend back into her life, which adds a new set of problems, because Meg isn't sure whether she's straight or gay, or maybe neither. As she draws closer to the force behind her visions, she makes some hard decisions about her life and comes to terms with the trauma of her past.

Okay, this is why I know ghosts aren't real.

I'd just turned fifteen. Mom, worried about my increasing isolation (her words), arranged a slumber party with my two closest friends, who weren't all that close: Margie, a bouncy otter, and Amelia, a more timid weasel.

I thought it was going to be tedious, and it was, but Margie and Amelia seemed to enjoy being over. They insisted on raiding the liquor cabinet, but then they were disappointed when all we could find was some fruity liqueurs. They made a game out of sneaking them back to my room even though I basically could've asked my mom and she'd have let us have them (I knew that wouldn't be "cool," though).

Because it was so close to Halloween, we decided to play this ghost game. I'm sure you know it—Athos showed me a bunch of different names, after, though I didn't tell him why I was interested. Bloody Mary is the most common one, but there's Candyman and Betty Browne. Margie wanted to call Drowned William, because the others need mirrors and for him, you just need water—like our house pool. Drowned William is supposed to have been an otter who died during the Civil War fighting for the South, and when you call his name five times looking down into the water, his spirit comes back and tells you how you're going to die.

It's bullshit, of course, but we did it and stared down into the water and Margie kept pointing at shadows and saying she heard whispers. I know my pool pretty well, but she really had me spooked. Amelia had it worse, though, and when Margie said that Drowned William told her Amelia was going to die in a plane crash, still a virgin, Amelia's voice got high and she told Margie she was done with it.

After that, of course they wanted to talk about boys, being fifteen-year-old normal girls. I didn't, because I didn't find boys all that interesting. In fact, the parts they found most interesting I really didn't like talking about.

So I kept quiet while they talked about who was cuter and then they started talking about where they let the boys put their paws and hands (depending on who it was). Margie had gotten her first season the previous month and was over it now, but talked in detail about how much more intense her attraction to all the boys had been. Amelia and I hadn't gotten one yet, but Amelia listened raptly to Margie and kept saying, "I can't wait." Me, I kept drinking to cover up my disinterest-bordering-on-discomfort, but when Margie said she wanted to let Bubba Porter put his fingers down there, even out of her season, I couldn't keep in the "Ew," and they both turned on me. Who did I like, then, if Bubba was so gross?

It wasn't that, it was that putting fingers there…anyone doing it, I just thought it was gross. But I tried not to say that, so they kept asking me which boy I thought was cute, which boy I would let touch me, and I said I didn't want any boy to touch me.

Then they got quiet and Amelia asked if I wanted a girl to touch me. Margie and I were floating in the pool in my room, then, and Amelia was sitting on the edge with her feet in the water, and when she asked that, Margie looked at me sharply and got out. Amelia pulled her legs up out of the water and they both sat cross-legged and stared at me.

I said I didn't want girls to touch me there either, and they sorta relaxed but then also got more intent. Margie asked if I ever touched myself, and I said no, and Amelia asked if I knew it felt good, and I took another drink so I wouldn't have to answer. I was starting to feel all queasy inside.

Then Margie actually put her paw inside her pants.

I only saw her rub for a bit before I looked away. I think Amelia was a little shocked, but she was more fascinated by my reaction. I asked Margie to stop, and Margie said it felt too good to stop, and then Amelia started doing it too.

I jumped out of the pool and yelled at them to stop it. I was mad at them for doing that in my room, I was mad at myself for feeling weird, and a minute later, when my mom swam in from the living room to ask if we were okay, I was mad at her for not having a shirt on and embarrassing me. I lay down beside the pool, and Margie and Amelia started whispering and I didn't even try to listen.

I did finish the rest of the booze, though. I thought it would put me to sleep. In retrospect, that was a mistake.

When I woke up, Margie and Amelia were asleep. The room was still dark and I didn't think I'd been asleep for very long. My parents were still watching a movie out in the living room; I could see the reflections shimmering in my pool, which connected to the living room under the wall, and I could hear the music. I knew which movie that was, that fuckin' Across the Universe movie that they watched like once a week now. Partly it was the lead actor, this British otter they thought was adorable, and partly it was all the music they liked, and partly it was all the love; that movie's lousy with it.

I got up in the middle of the night a lot around then, and usually I ended up laying there for an hour before going back to sleep. I'd fallen asleep at the edge of the pool, so I rolled over to get into bed, but when I did, everything wobbled and I felt kinda sick, so instead of crawling into my bed, I pulled myself over to the edge of the pool. Mom always said floating in the water helps settle a stomach, but I didn't want to get sick in my bed, not after last time, so I kinda waited there to see if I was going to heave up or not.

And I was staring down at the lights in the pool and I saw this shadow down there. Of course the first thing I thought about was Drowned William, but it looked like he had wings. I stared down as the lights all flickered around and then I heard him talking. He had a deep voice that was water-muffled even though it was in my head.

Meggie, Meggie, you want to know how you're going to die? I can tell you.

My mom used to call me Meggie when I was little.

You're going to die alone. You're worthless and broken, you'll never feel a lover's touch like your beautiful friends. And you're going to die with a heart full of pain, little Meggie, because everyone you care about, everyone who swims with you, they're all going to choke and cry and bleed and drown. And do you know why, Meggie?

There was something huge stuck in my throat.

It's because of you. You bring nothing but hurt.

Of course I did. What kind of question was that?

I did know. Mom kept sleeping pills by her bed. I stared down at Drowned William and two gleaming points of light appeared where I thought his eyes should be.

The only worthwhile thing you can do with your life is end it. You'll never give love, never know love, only hurt and pain.

And then he was nothing but flickers of light and dark. But it didn't matter. I knew where the pills were.

So yeah. I woke up in the hospital, and that's how I got left behind a year in high school and spent almost four years with Dr. Wallace, taking antidepressants and doing Internet research on alcohol- and stress-induced hallucinations. I know what Sol and Alexei think they saw, but look. I'm a fucking expert.

And since getting off the pills, I hadn't seen or heard anything that couldn't be explained rationally. The pot helped calm me down if I started feeling edgy, and I'd smoked it whenever Sol or Alexei got weird about their "ghosts." It had been working great for me, kept my head level even when they went on babbling about a spirit world.

Lots of hallucinations come from loneliness, Dr. Wallace told me. I'd been rejected by my closest friends and was feeling bad about it, so I invented a vision to care about me, even in a negative way. Sol's trouble all started when he got demoted or kicked off the baseball team or something, and his dad started yelling at him and his brother was off in college. Alexei left his family behind and then left his foster family to come here. We all had loneliness issues and invented ghosts to deal with them. At least their ghosts didn't tell them to kill themselves, but I was keeping an eye out for them.

So that was probably all this was. My two friends had left that morning, and I was feeling lonely and vulnerable, so my imagination made the character I'd created talk to me. Nothing more.